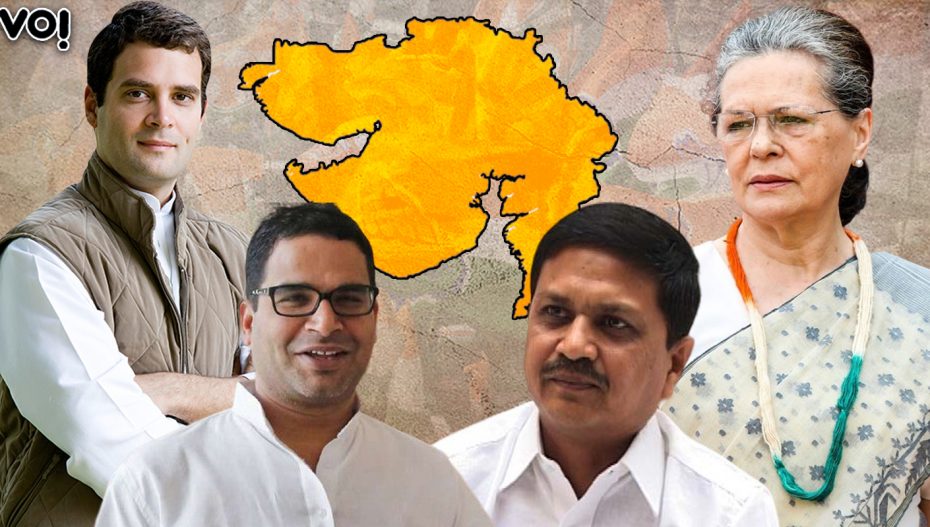 Even as it appears imminent that political strategist Prashant Kishor is expected to associate with the Congress party as a key planner for the Gujarat polls, it is public knowledge that he wishes powerful Leuva Patel leader Naresh Patel to play a major role, while ensuring that the young Hardik Patel, a Kadva Patidar, remains integral to the system.

Speculations are also rife that Prashant Kishor may even join the Congress party ahead of the crucial 2024 Lok Sabha elections.

Three meetings took place between national Congress leaders with Naresh Patel, who heads the Khodaldham Temple Trust and being a Leuva Patel leader has considerable influence in his sub-sect in the politically significant Saurashtra region.

Patel’s first meeting on Friday was with the national general secretary and a close Gandhi family aide KC Venugopal, before a separate meeting with Prashant Kishor. This was followed by another conference with Congress president Sonia Gandhi, Prashant Kishor and Venugopal. A final call would be taken once Rahul Gandhi returns from abroad around May 15.

According to reliable AICC sources in Delhi, the key point that Prashant Kishor and Naresh Patel insisted at the meetings was that it was crucial not to let Hardik Patel leave the party in view of the recent noises he has made about being given short shrift in the party, while simultaneously praising the BJP leadership. Hardik’s Patidar agitation played a stellar role during the run-up to the December 2015 civic bodies elections as well as the 2017 assembly polls when the Congress gave its best performance in three decades.

After returning to Rajkot from Delhi, Naresh Patel, who had all along kept his cards close to his chest as to which party he would eventually join, told reporters at the Rajkot airport, “I had met Prasant Kishor. I will announce my decision by May 15”. That is when Rahul Gandhi returns from abroad and the Congress leadership would have one final meeting with Naresh Patel.

Both the warring sects of the Patidars — the Leuvas and Kadvas — are estimated to constitute around 1.5 crore of Gujarat’s 6.5 crore population. Patidars or Patels claim to be the descendants of Lord Ram; the Leuvas and Kadvas claim to have descended from Ram’s twin sons, Luv and Kush respectively. The Leuvas worship Khodal Ma as their clan deity, while the Kadvas worship Umiya Mata.

Even the Gujarat Congress sources reveal to VOI that the anti-BJP (Bharatiya Janata Party) tone the agitation gave birth to is still alive.

“We need Patidars to fight and win the elections against BJP, especially the Leuvas and Kadvas who constitute around 15 per cent of the state’s electorate”, a newly appointed AICC state in-charge secretary of Gujarat Congress said.

In Central, North and South Gujarat, BJP had maintained its presence with a total of 76 seats in the 2017 elections.

A senior Indian-Political Action Committee (I-PAC) member told VOI that it’s evident that Patidars have a strong influence on around 50 seats in Gujarat, the majority of which are in the Saurashtra region.

“If Congress can give the right electoral candidature to Naresh Patel and keep a hold on Hardik Patel, then the chances are higher that the other Patidar community organisations such as Umiyadham Sidsar in Saurashtra; Umiyadham and in North Gujarat; Vishva Umiya Foundation and Sardardham in Central Gujarat; Surat-based Samast Patidar Samaj in South Gujarat and Patidar Anamat Andolan Samiti (PAAS) will align as pro-Congress”.

The Aam Aadmi Party (AAP) is also trying hard to fish in the troubled waters by keeping its door wide to welcome influential leaders.

Notably, in the recent 2021 Surat Municipal Elections, AAP has won 8 seats out of 27 in Patidar-dominated areas where quota agitation led by the community leaders in 2015 had taken place. The Patidars had supported the Congress after 2015 but preferred the AAP over the grand-old-party this time around.

“Patidar community leaders had proposed a specific number of tickets in the Surat civic polls which the Congress had denied. Then the AAP won 27 seats with a vote share of 28.58 per cent, while the Congress which did not win a single seat saw its vote share go down by 9.23 per cent”, the I-PAC source told VOI.