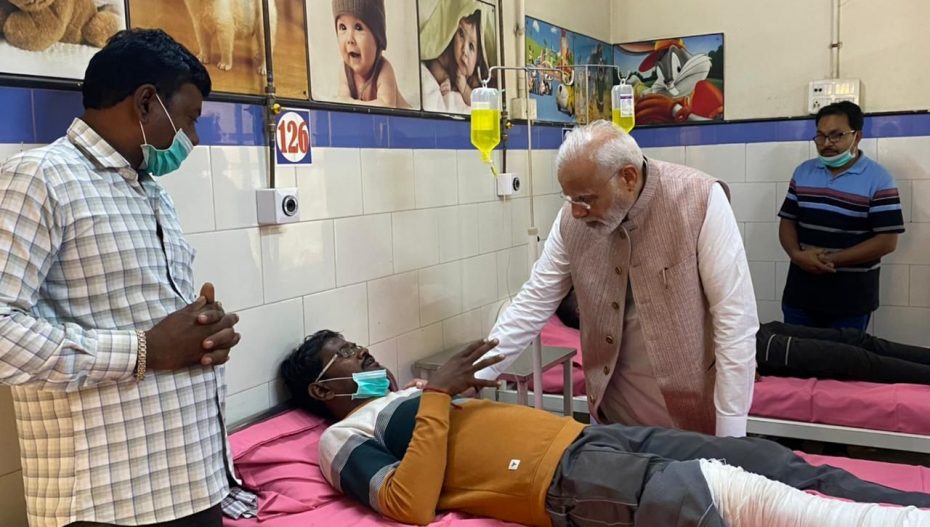 Prime Minister Narendra Modi visited the victims of the Morbi bridge tragedy on Tuesday evening. He inspected the site of the bridge collapse and had a word with local officials about the unfortunate incident. He was accompanied by Chief Minister Bhupendra Patel and cabinet minister Harsh Sanghavi. Hours before Modi landed in Morbi, the government announced Rs 6 lakh compensation for the kin of the deceased, and Rs 50,000 for the injured.

PM Modi spent 30 minutes in Morbi interacting with victims of the tragedy. One amongst them was Savitaben. She is a resident of Morbi and was out with her family on October 30–when the bridge collapsed. While her family members had crossed the bridge, she was walking a little behind and in just 30 seconds–she suffered several injuries while her family was saved. Modi even expressed his condolences to Savita’s relatives.

After the visit PM Modi shared on his social media: Went to Morbi, which witnessed the horrific bridge mishap. Met the bereaved families and extended condolences. I visited the site of the tragedy and went to the hospital where the injured are recovering. Also met those involved in rescue ops and chaired a review meeting.

Earlier on October 31, PM Modi made remarks about this tragedy in Kevadia. He said, “I express my condolences to the families of those who lost their lives in the accident. In this hour of grief, the government is with the bereaved families in every manner. The Gujarat government has been carrying out relief and rescue operations since yesterday. Centre too is extending all help to the State government.Priority is being given to ensure that people face minimum problems.”

Earlier in the day, Bhupendra Patel said, “We are grateful to Prime Minister Narendra Modi for staying with us in this hard time and guiding us to lead Gujarat out of this grief.”

Search operation continued in the Machchu River two days after the incident which claimed over 140 lives. NDRF Commandant, VVN Prasanna Kumar, who is overseeing the rescue operation, said that a few bodies could be lying on the river bed.

Meanwhile, the Supreme Court has listed the petition seeking a judicial inquiry into the bridge collapse for hearing on November 14.

The Congress party and Aam Aadmi Party on Tuesday targeted the Bharatiya Janata Party and Prime Minister Narendra Modi over renovation of Morbi civil hospital alleging that it is being done ahead of PM Modi’s visit to the city in the aftermath of tragic bridge collapse on Sunday. Sharing photos and videos of white wash and other renovation works being done at the hospital, both Congress and AAP questioned the timing of the work.

Patients were briefed about talking to PM

Just hours before Prime Minister Narendra Modi visited Morbi, some patients at the government hospital were selected and briefed about speaking with him, and were shifted to new beds with new sheets in a freshly painted ward. A ward on the ground floor that was empty has been deep-cleaned and new beds with fresh bedsheets set up. Some of the bedsheets had markings of a hospital in Jamnagar, which is 160 km from Morbi.

At least 40 painters worked through the night to repaint the entire exterior of the hospital, besides touch-ups inside the wards where PM Modi met the victims. Toilets got new tiles too. The hospital has got four new water coolers, too, since the tragedy on Sunday, some of which did not have supply connections.

Streets are being swept clean, entry to the bridge where the prime minister will first arrive is clogged with police and administration officials, and hospitals where he’s going to meet the injured are being scrubbed clean.

Congress party slammed Prime Minister Modi and said the Morbi Civil hospital — where the injured from the Gujarat bridge collapse were admitted — was painted to cover up its flaws as preparation for his visit on Tuesday. The two parties said the hospital was painted so the prime minister could hold “photoshoots”.

Aam Aadmi Party also shared a video of renovation work at the hospital and took a dig saying that it is being done so that “the poor building does not get exposed in PM Modi’s photoshoot.”

“Overnight painting is being done in Morbi Civil Hospital so that the poor building does not get exposed in PM Modi’s photoshoot tomorrow,” tweeted the official page of AAP.