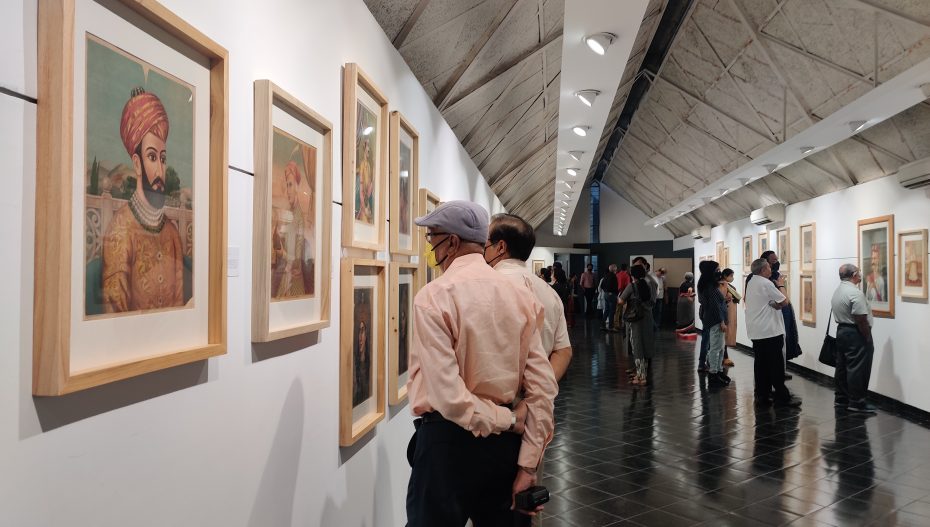 An enchanting Art exhibition of lithographic and chromolithographic portraits and pictures was held at ‘The Gallery’ in Amdavad Ni Gufa at CEPT University on November 23 by a renowned art collector – Anil Relia.

Dignitaries including Amit Ambalal ( a renowned artist) and Jatin Das (painter, sculptor and muralist) made their esteemed presence at the exhibition.

Along with the portraits of ancient educational charts, there were lithographic portraits of great leaders like Prithviraj Chauhan, Ranjeet Singh, Shambha Ji, Nana Saheb Peshwa, Sambhaji, and Rani Lakshmi Bai. The exhibition primarily focused on displaying Relia’s collection of portraits over the years from Poona Chitrashala – which is the foundation of the conception of this exhibition. Many lithographs were collected from Poona Chitrashala.

At the exhibition, Relia talked about the collection and the historic aspect of each portrait.

Relia has been organising these types of exhibitions for the last 11 years featuring miniature, modern, photography of Mughals in India and many more. This one was the 12th edition of his Indian portrait series. “Ever since childhood, I was passionate about collecting portraits and paintings, so once I noticed ‘Poona Chitrashala’ label on a few paintings and ever since I saw that I got very intrigued about this organisation. And after I researched about it, I got to know about a press that was established in Pune and freedom fighters use to use that press to instil thoughts of freedom and liberation in people including Lok Manya Tilak through whose support this press began,” said Relia

This exhibition showcased almost 90 odd portraits of leaders and Indian Gods and goddesses. Relia has been Collecting this portraitist for over 30 to 35 years, he mainly travels himself to places like Gujarat, Maharashtra, Rajasthan, Madhya Pradesh to collect these timeless pictures, he has pictures from the 16th and 17th century to recent years as well.

“Poona Chitrashal has developed educational charts to explain various cultures to people and has played a great role in constructing, educating and promoting the human civilisation in India”, he added.

At the end of the event, he threw light on some unknown historical facts like how the first-ever bomb was used on Briutisher by freedom fighters.