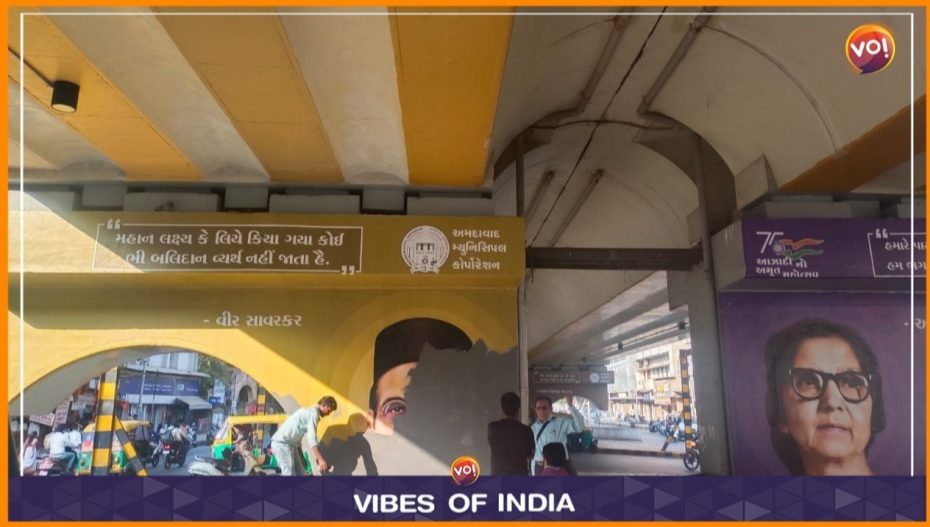 After a small but vociferous group’s protest on social media over the Ahmedabad Municipal Corporation (AMC) erasing Mahatma Gandhi’s image from the pillar of the Arun Jaitley flyover over the Income-Tax crossroads and replacing it with Savarkar’s portrait, the civic body overnight erased Savarkar’s image as well.

Savarkar’s image has come up on the pillar that is located right in front of the Gujarat Vidyapith. It may be recalled that the Vidyapith campus had erupted in controversy in October this year after it was announced that for the first time in its 102-year-old history, Gujarat Governor Acharya Devvrat, a person with RSS background, and not a Gandhian, was named chancellor.

The question now playing on everyone’s mind is, whose image will next come up on the flyover pillar?

In 2012 when the flyover was conceptualised, its theme was based on the historic statue of Mahatma Gandhi nearby. It was then decided that all pillars of the flyover will have the image of Gandhi’s famed round spectacles as a tribute to the Father of the Nation in his home state.

The AMC, to ensure the Gandhi statue wouldn’t be damaged during the construction of the flyover, created a special steel structure around it in 2012, thereby adding another Rs 10 crore to the Rs 50-crore construction cost of the flyover, which was thrown open to the public in 2019. It has been named after the late BJP leader Arun Jaitley.