The Fall of the House of Rajapaksa: How Unbridled Nepotism Let Sri Lanka Down 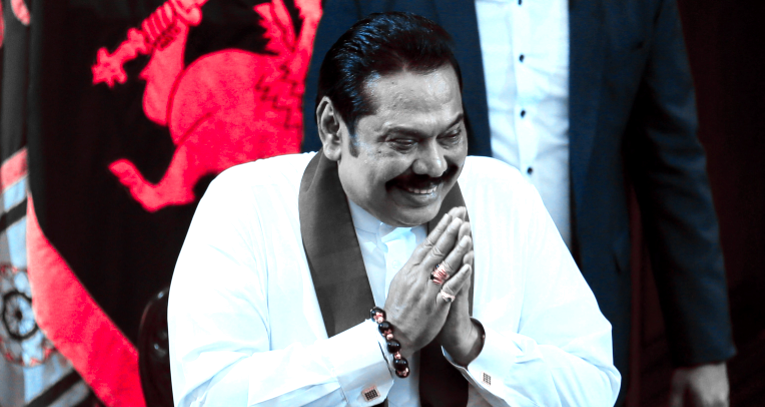 In the aftermath of the 2004 tsunami, Sri Lanka elected a new president, Percy Mahendra Rajapaksa.

He had been introduced to parliamentary politics way back in 1970 at the age of 24, by the legendary Sirima Bandaranaike, to replace his deceased father, D. A. Rajapaksa. The young lawyer was exuberant and a mass mobiliser.

After a keenly contested battle, Rajapaksa defeated the United National Party candidate Ranil Wickremesinghe by a narrow margin of 190,000 votes.

However, Rajapaksa was elected under a cloud, with all sorts of allegations brought against him – ranging from misappropriation of tsunami funds to manipulation of votes with the use of proxies to prevent northern voters from exercising their franchise.

But Rajapaksa was all set to reshape the country’s political destiny – and his own.

In the run up to the 2005 presidential election, speaking to this writer from his modest Weeraketiya residence, he spoke of multiple political aspirations: ending the protracted war, ensuring the Rajapaksa legacy outlives that of the famous Bandaranaikes’ and the launch of son Namal Rajapaksa to represent Giruwapattuwa.

Mahinda Rajapaksa appeared to have lived every bit of his political dream, until his own followers began to hit the streets calling for his resignation and an immediate end to family rule this year.

Rajapaksa’s ‘family power project’ was a well-crafted one, and one he has continued to defend.

After assuming office as president, he brought in his brother Gotabaya, a former military officer and an American citizen at the time, to serve as the country’s defence secretary. Soon, his other brother Basil, also an American citizen, was appointed senior advisor to the president. In 2007, Basil was brought into parliament on the National List, reserved for distinguished citizens.

During Mahinda’s first term itself, the Rajapaksas brought the country’s finances under their tight grip. There were some protests against one family controlling the island’s finances. Protests were also seen against growing militarisation as retired military officers were appointed governors and heads of public institutions, while family members began creeping into public and foreign services.

Meanwhile, those who critiqued the concentration of power, nepotism, human rights violations and grand corruption were labeled ‘traitors’. Their claims were dismissed as figments of imagination or as anti-Rajapaksa propaganda.

Unfortunately for Sri Lanka, a large majority of voters repeatedly failed to recognise such power projects as a systemic issue that needed correction and grasp that feudal loyalties ultimately defeat public interest and national purpose.

So the gods continued to smile on the Rajapaksa family’s expansion into public life.

As a “war-winning president,” securing a second term was a cake walk for Mahinda Rajapaksa.

He was extremely popular with a large section of the population for having militarily defeated the Liberation Tigers of Tamil Eelam (LTTE), a militant group that fought for a separate homeland in the island’s northeast. Sri Lankans had been suffering from war fatigue and lacked faith in politicians to bring the war to an end through military means. Each attempt to negotiate a political solution had been thwarted by powerful sections of the majority.

The war had taken nearly 60,000 lives. According to UN estimates, some 40,000 civilians who fled the ‘no fire’ zone during the final phase of the war perished under Rajapaksa’s watch.

Allegations of war crimes have hung like the sword of Damocles over Rajapaksa’s head but he – both popular and populist – dismissed the claims of atrocities and refused to engage in discussions towards a political solution.

Instead, his second term was dedicated to strengthening the power concentration project. More extended family members were seen assuming positions of power in various institutions. In the afterglow of the war victory, the necessity to seek a political settlement to the national question was cast aside.

Rajapaksa unrepentantly demonstrated a “winner takes all” attitude and openly said there won’t be any “appeasement” beyond the Thirteenth Amendment to the Constitution, which paved the way for setting up of provincial councils.

The war euphoria evaporated with the sobering political result of 2015 when Rajapaksa suffered a humiliating defeat at the hands of Maithripala Sirisena, former general secretary of the Sri Lanka Freedom Party (SLFP).

In 2019, the family was back, and in much larger numbers.

Through more than half a century in politics, Mahinda Rajapaksa has championed human rights, played street mobiliser, been friend of Palestine and the poor, and played saviour of Sinhala Buddhists.

He came to symbolise the kings of yore, and ruled like one, with unfettered power, arrogance and nerves of steel.

He also brooked no opposition and his ego was fed by a sizeable section of the Sinhala majority, who saw no wrong in comparing an elected president to a king. The ‘royal court’ remained a family affair as Rajapaksa kept adding more of his loyal kith and kin to national politics and public institutions.

When questioned on this strong nepotistic streak during an Al Jazeera interview, Rajapaksa was unapologetic. “People keep voting Rajapaksa family members [to power]. What can I do? When they do not wish to see them anymore, they will kick them [Rajapaksas] out,” he said.

The end came about unexpectedly.

Public anger began focusing on the Rajapaksa family as economic burdens increased and there was lack of remorse or explanation for the financial collapse. People were driven to the edge.

Reeling under skyrocketing costs of living, protests began islandwide, demanding essentials. The world’s attention was drawn to a novel protest at the iconic seafront esplanade known as Galle Face. There, young men and women declared a protest site and dubbed it ‘GotaGoHome’ village. Peaceful and colourful protests were held there continuously for a month.

The organic growth of the protest and its scale showed that the Rajapaksas were no longer the popular political family that they once were. In addition to calls for collective resignations were demands for forensic audits, recovery of stolen assets and legal action against Rajapaksas. People faulted the family for the island’s state of bankruptcy.

With people queuing up daily for fuel and gas and medical and food supplies drying up, the country gradually turned into a protest ground. The flippancy of the government was rubbing salt on people’s wounds.

Since April 3, four Rajapaksas have resigned from their posts under tremendous public pressure. It was evident that the family was on the backfoot.

All of this finally erupted on May 9 thanks to provocation by Mahinda Rajapaksa, once among the most loved Sri Lankan politicians.

In a last ditch attempt, Mahinda Rajapaksa convened a meeting with his acolyte Johnston Fernando at his official residence Temple Trees on May 9. They spoke passionately about meeting force with force and claimed they would not run away in fear. Soon, goons emerged from the prime minister’s compound, some bearing poles.

They attacked the protestors at Galle Face, flattening the temporary huts and beating people up.

This was the turning point.

Within hours, Rajapaksa loyalists’ homes were burnt to cinders and eight people have so far lost their lives in violence that consumed Sri Lanka.

Populist leaders, as they grow in power and influence, often underestimate the power of the humble and anonymous voter. A man once revered by some as ‘appachchi’ or father, and respected as a war-winning leader eventually had to leave his official residence under a tight security blanket, shying away from cameras and fearing for life.

Those who loved him once and cheered him on have turned against him. His own supporters have turned protesters.

The rise and fall of Mahinda Rajapaksa contains many lessons for populists, the power-hungry, and the hawkish. It contains more lessons for the voters, about the choices we make.

At the end, Mahinda Rajapaksa leaves a legacy he did not plan on: one of defeat, humiliation and public rancour.

Dilrukshi Handunnetti is a Sri Lankan journalist and a lawyer.