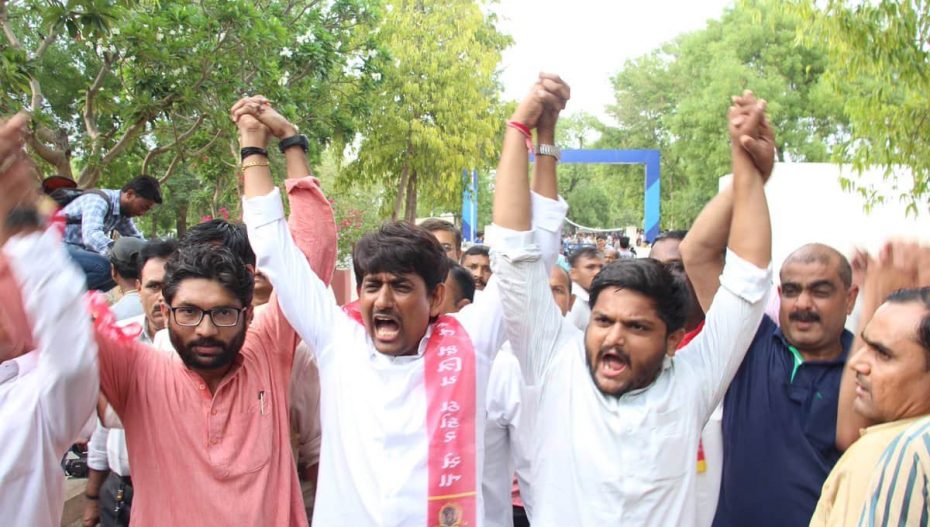 Circa 2017. Hardik Patel, an upper caste Patidar, Alpesh Thakor, an OBC and Jignesh Mevani, a Dalit, are the three young Turks who fuelled the Congress party’s rejuvenated campaign during the December 2017 Gujarat Assembly elections, which left the ruling BJP with an apologetic seven seats more than a sure, spectacular defeat. It won 99 seats in a House of 182 as against 92 required for a simple majority.

It was a historic moment in the social and political history of Gujarat when a Patidar, an OBC and a Dalit — all perennially at loggerheads — spoke in one voice on all contemporary issues. The then Congress vice-president Rahul Gandhi too raised the very same issues.

It was the first time in contemporary history that Patidars as well as the Congress party’s once lethal combination of Kshatriyas (OBC), Harijans, Adivasis and Muslims (KHAM) spoke in the same voice. All challenging Prime Minister Narendra Modi’s claim of Gujarat being a model state of governance and accusing his government of practising crony capitalism.

Come 2019 Lok Sabha elections, by when Hardik Patel and Alpesh Thakor had joined the Congress party, and BJP romped home with all the 26 seats in Gujarat with mystical victory margins, including nearly 7 lakh of the present State BJP chief CR Paatil that remains the highest in the country. All the issues that they raised — unemployment, expensive education, poor health infrastructure, the sledgehammer impact of demonetisation and GST, crony capitalism — which all the three agree today were there in 2019 and are still there.

The three musketeers are lone rangers in 2021, and feeling isolated, Hardik Patel in Congress and Alpesh Thakor in the BJP, which he had embraced complaining that the Congress didn’t give him his due. Jignesh treads on the same path that he began with, but realises he is too lonely to wage a tough battle.

Alpesh Thakor’s is the most curious case. In a candid chat with Vibes of India, Alpesh says, “Well, yes, I do sometimes think my contribution to the backward classes was better when I led the Thakor Sena and not joined any political dispensation.”

So does he regret joining the BJP? “Well, there has been no time to think all that. I am trying to focus on my work. I travelled to 176 talukas to get a firsthand account of people suffering first from Covid-19 and then Cyclone Tauktee. I have a network in some 10,000 villages (of Kshatriya Thakor Sena) and so I continuously travel,” he replies.

Does he ever think in the heart of his hearts that Congress would have been a better option, Alpesh counters (laughs): “What do you want to hear? I earlier replied to your larger question if it was better to be a social activist or be part of a party.”

And for Hardik Patel, his being named the Working President of Gujarat Congress close to his 27th birthday on July 20, 2020, is just a little meaningless designation.

“See, I haven’t hankered for any post. I was made the working president, so give me work, make me run, make me work hard, utilise my full potential. It has been more than a year,” Patel asserts.

When pointed out that as the working president he should be on auto-pilot and not need instructions, he snapped, “Well, I have been on the move making public connect even after the 2017 elections and until March 2020 when Covid hit the first. Have done it later also. But this is my initiative and not as a cohesive Congress plan.”

So, does he regret joining the Congress party and feels was better off as an activist? “No, not in that sense. I believe it is high time the Congress in Gujarat thinks and behaves as a cohesive, united force with a single-point agenda to defeat the BJP. Remember, even in the thick of 2002, Congress did win 60 seats, later went up to 80. So 110 is not far, while you need 92 to form the government.”

Hardik was only speaking figuratively, since for the record, the Congress bagged 51 seats in 2002 elections against BJP’s 127 and 77 in 2017, which was its best performance since the BJP first came to power on its own in 1995.

When pestered further if he regretted his Congress move, Hardik laughs, just like Alpesh, and says, “Once in a while when I am alone and reflecting on my course, I may have felt an activist role could have been better. But, simultaneously, I also realise that individually, as an activist, there are limitations. So a political party is important to fight the present regime.”

“Yes, I do feel lonely but I have no regrets that I haven’t joined any political party. I feel lonely because I strongly feel Hardik Patel, Alpesh Thakor, Jignesh Mevani, Kanhaiya Kumar, Chandreshekhar Azad, Shehla Rashid could have formed a joint youth front.”

He went on, “If Hardik, Alpesh and I had come together not just on campaign themes but strategically to form a front in Gujarat and struck alliances with like minded parties, we would have by 2022 polls been ready to win at least 15 to 20 seats. (Gujarat has 182 assembly seats).” And Jignesh says he did float this idea but none responded. “Everyone was and is on his own trip,” he laments.