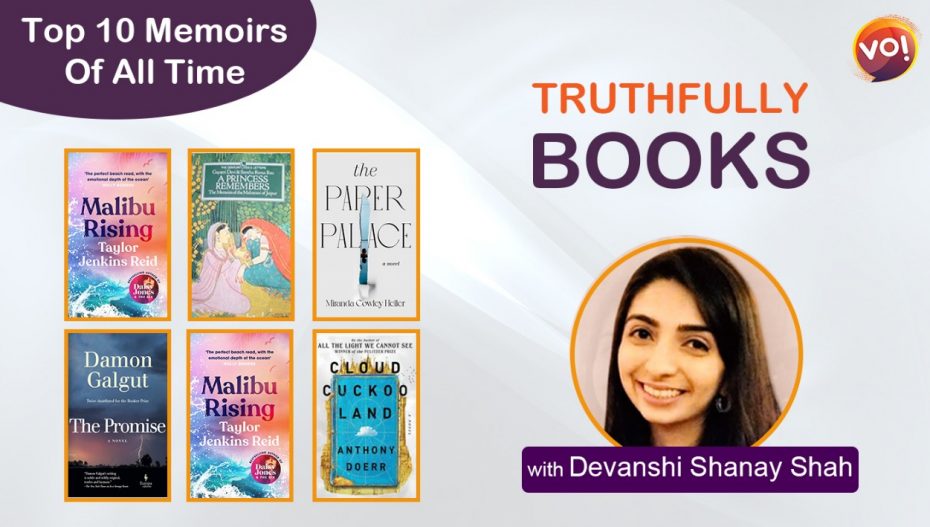 As this year comes to a close, I have curated a list of the ten most thought-provoking, unputdownable prose that you should carry with you to the new year. A mix of novels and memoirs, the indelible quality of writing have contributed to making these books not only the best of this year but perhaps the best of this decade.

The past, present and future share a common thread, an ancient Greek text. The legend of Aethon and Doerr’s masterful storytelling unite space, time and miles to create a magical coming to age story of the five protagonists. This imaginative, ambitious plot is brought to life through alternating and ever-shifting viewpoints.

An evocative novel chronicling a night in the lives of the famous Riva siblings, the ill-fated night of their annual summer party. The book spans generations proving TJR’s talent for crafting powerful historical narratives across alternating timelines. Their relationship with their father, the legendary singer Mick Riva plays on the back burner through the plotline. With many unresolved, simmering issues plaguing the protagonists, the book acts like a powder keg resulting in the Riva mansion going up in flames setting Malibu ablaze.

The Promise by Damon Galgut–

Winner of the Man Booker Prize 2021, The Promise charts the disintegration of a white South African family, the Swarts. Over the course of three generations pre and post-Apartheid, the family sees its views, inheritance, and privilege devolve into nothingness. Amor overhears the dying matriarch Rachel extract a promise out of Amor’s father to give Salome, their Black maid, a tiny piece of land. The transfer of ownership keeps getting delayed year after year at the mercy of the self-consumed family. The author deftly moves between each character’s point of view and examines their selfishness when it comes to fulfilling their own agenda.

A personal favourite, this is a profoundly personal, gut-wrenching memoir of Zauner losing her mother to pancreatic cancer. It describes a daughter’s desperate hope to save her dying mother to rebuild their fractured relationship. And later using food, the ultimate source of nostalgia to remember her mother by. It is the exploration of her Korean identity amidst coming to terms with an impossible inevitable loss – “It felt like the world had divided into two different types of people, those who had felt pain and those who had yet to.”

The best way to describe this book is that it unfolds like a rose and that with every successive petal unfolding, a new layer of complexity within the story. It does so in a most delicate manner while still exposing the thornlike tragic histories that have led to this watershed moment. The protagonist Elle has to make the impossible choice between her idyllic life as a wife and mother of three children and her complicated childhood love.

A marvellous exposé by journalist Patrick Radden Keefe shines a light on the deplorable source of wealth of the Sackler dynasty, OxyContin – the catalyst of the opioid epidemic. It shows the dark side of capitalism, steeped in avarice and excesses with no consideration of the human cost. This is the story of one of the wealthiest and most respected families in the world embroiled in arguably the biggest coverup of modern time and losing the thing that mattered the most – their legacy.

A crime novel, social commentary, and familial history all rolled into one. Harlem Shuffle introduces us to Ray Carney, a furniture salesman looking to rise the ranks of middle-class society by making backhanded deals with his crook cousin Freddy. Set in the 1960’s it beautifully captures the soul of New York, particularly Harlem. Ray’s world implodes during an ill-fated hotel robbery and destroys the carefully curated life he was desperately trying to create.

Klara and the Sun by Kazuo Ishiguro–

Nobel Laureate Ishiguro has created a wonderful dystopian world in which an AI or Artificial Friend named Klara makes poignant and keen observations about mankind. The naivety and sensitivity of the robot as it examines the world around it and the empathy it evokes within itself makes for a truly refreshing addition to the sci-fi genre. The bigger philosophical questions posed by the little AI subtly make us explore our own responses to these deep moral conundrums.

Great Circle is an incredible story of a female aviator determined to circumnavigate the globe from north to south, juxtaposed with a young Hollywood starlet chosen to play her a century later. This epic novel not only spans a hundred years but the entire planet as well. As Marian Graves embarks on the final leg of her trip, she disappears off the face of the Earth; Maggie’s lyrical style of writing will have you hooked through the six hundred pages of this mammoth prose.

A Pulitzer prize winner Strout has managed to breathe life into the character of Lucy Barton. The nuances, the insights, and the mannerisms accounted for are so detailed she may be as real as you or me. The third book featuring Lucy isn’t connected to her previous works but recounts aspects of Lucy’s life. This novel explores the emotion that still exists between Lucy and her ex-husband William. Despite the relationship being long over, friendship and tenderness persist lifelong.

Devanshi Shanay Shah, our in-house expert on books and parenting, is currently working on her debut novel. She has a Masters in literature and writing from the University of Cambridge. A voracious reader, she has an appetite for fiction and poetry. In the weekends, she loves to play scrabble, and sip oolong tea while watching old black and white movies. Devanshi is mother to one-year-old Ayesha who doesn’t give her much time for any of the things mentioned above. Please write to her at feedback@vibesofindia.com

Top 10 Philosophy books of all time

Top 10 Memoirs Of All Time

Top 10 Self-improvement Books Of All Time