Top 10 Memoirs Of All Time 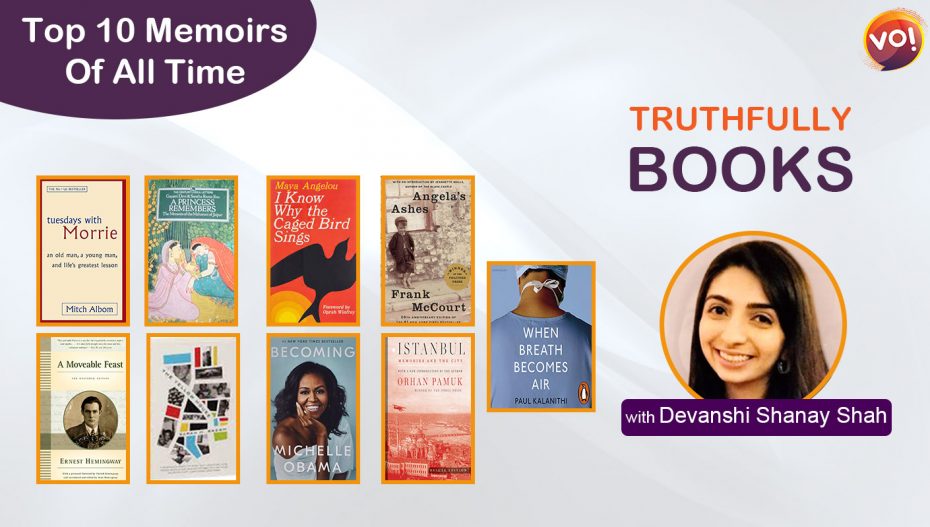 To write a memoir isn’t just about opening up one’s life to the readers, but it serves as a map to one’s soul. It is their account of the incidents that punctuated their life. Memories forgotten, dusted off and then recounted in a way utterly endemic to them. Below are the memoirs that encompassed the individual’s life and stretched beyond them to make for a truly unforgettable telling.

This 1996 Pulitzer Prize-winning memoir is truly a classic in its genre. McCourt’s disturbingly honest narration immerses the reader into a fascinatingly tragic world rife with abject poverty and alcoholism. It is written from the point of view of a child (his younger self), which makes for the heartbreaking conditions faced by the author both in New York and Limerick, Ireland, a searing commentary on childhood neglect and addiction. This harrowing situation either resulted in untold misery for most kids or for the few ‘lucky’ ones in Death.

An inspirational memoir written by the former First Lady of the United States of America, who also happened to be the first-ever African American person to serve in this post. Becoming is all about the drive and determination that fuelled Obama to devote her life to public service. An intimate look into her life, she opens up about her relationship with her husband and children with the backdrop of all the trials and tribulations that led them to the White House and the importance of the legacy that they left behind.

Tuesdays with Morrie by Mitch Albom –

Albom reconnected with his dying professor Morrie Schwartz when he learnt that his former mentor was suffering from ALS and had little time left. In twenty-seven concise chapters, this book explains the meaning of Death, and the enlightened journey one takes to reach a point of acceptance and detachment from the inevitable. Accused of being overly saccharine, this book may at some point read as too optimistic, but somewhere between the pages lies motivation and the zeal to live life that we all lose somewhere in the way.

A Princess Remembers: Memoirs of Maharani of Jaipur by Gayatri Devi and Santha Rama Rau–

A few have lived the privileged life of a royal, and even fewer can fathom it. A personal favourite, this book is a recollection of the dizzyingly glamourous and sometimes almost fantastical life lived by the erstwhile Maharani of Jaipur. Her fairy-tale romance with Maharaja Man Singh II later transformed into a strong partnership in the face of a government determined to erase them and their past. At this point, Gayatri Devi joined the Swatantra Party, becoming one of the strongest opposition leaders in India and later found herself locked in Tihar Jail because of it.

I Know Why the Caged Bird Sings by Maya Angelou–

This book traces the early life of Nobel Laureate Maya Angelou. Poignant and moving, this memoir explores the themes of molestation, rape and racism in a coming of age story of young Maya and her brother, Bailey. Despite the abuse, through the sheer fabric of her will Angelou goes on to finish school two years ahead of schedule. She then gets appointed as the first coloured streetcar operator in San Francisco, going on to becoming an acclaimed author and poet. This book is a testament to grit and courage against the harshest odds, all for the hope of flying free.

Posthumously published rather finished even, the last chapter was written by Paul’s wife Lucy; this is a memoir of a thirty-six-year-old neurosurgeon diagnosed with stage four lung cancer. Working in a high functioning field requiring complete clinical forbearance, Paul is confronted with his mortality in the face of his terminal diagnosis. How do you make life worth living in the face of Death? He examines both in equal measure in this work, as a physician and as a patient trying to make sense of it and accept the inevitable.

A Moveable Feast by Ernest Hemingway–

This autobiographical work focuses on Hemingway’s life in Paris from 1921-26. It is as much a love letter to Paris as it is to his younger self. He gives a detailed account of his interactions with other great writers of, as Stein described it, ‘the lost generation’. His journey of being inspired by and in some latent measures begrudging his peers – Fitzgerald, Pound and Joyce etc., all the while finding his vocation makes for a truly compelling read.

Winner of the National Book Award in 2019, The Yellow House is about a working-class African American family trying to establish roots in New Orleans. An overworked mother of twelve, Ivory Mae cares for the derelict house just like a thirteenth child. Sarah, the youngest of the brood, is the only one who manages to tear herself away from her roots and returns only after her home is destroyed during Hurricane Katrina, displacing her entire family. This is not only a complex familial story but is also a commentary on the class divide and racial inequality.

Shoe Dog: A Memoir by the creator of Nike – Phil Knight-

What sets this business memoir apart from the rest is that it isn’t a self-aggrandizing tale focusing merely on the mammoth success of the company. Knight has bared it all the highs and the lows, the multitude of lows chronicling the early years of Nike. The company has been named after the Greek Goddess of Victory, and you see how the nascent company became victorious over its competitors and the various lawsuits it was embroiled in. It isn’t just a story about perseverance; it is in equal measure a tale about risk, threat and leadership.

Istanbul: Memories and the City by Orhan Pamuk–

If you ever needed to travel without a passport, Pamuk could help you do it through his evocative writing. A personal history, a city’s history and one that of a nation all entwined, all moving but towards an unknown future. It is a lamentation of the past lost, houses and cities modernized, erasing their Turkish roots. Beautifully melancholic, it is filled with a spiritual longing that nobody quite knows how to solve.