Top 10 Philosophy books of all time 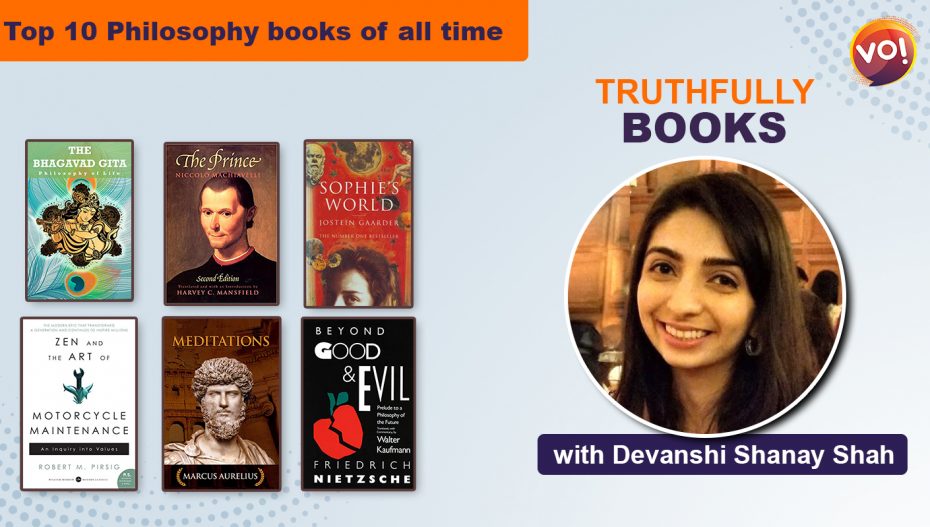 Philosophy as a subject is proof of the evolution of human beings beyond hunters and gatherers to becoming the most powerful organisms in the world. This title was not won by brawn but by brainpower. The idea that humans can think, analyze and use these thoughts to govern their decisions overriding their primal instincts, is wherefrom we derive our strength. Philosophy helps us delve into the recesses of our brain to find coherence in our ideas, thereby creating a more mature individual and ultimately a more civilized society.

Written by the only Roman Emperor who happened to be a philosopher, Meditations is a journal that became the cornerstone for the Stoic school of thought. It is the manifest of a ruler trying to make sense of not only himself but of the world around him. Doing this by managing one’s expectations to avoid facing disappointment, creating a rich inner ‘citadel’ for oneself, and understanding that virtue and happiness did not go hand in hand but to always pick the former. The contemporary advice is easily digestible and serves as an aspirational guide to modern-day living.

Sophie’s world is an astute ideological work masquerading as a fictional story. On an adventure, Sophie uses the different philosophical principles right from Pre-Socrates to Renaissance and Darwinian schools of thought, trying to solve a mystery. This unputdownable book is a splendid introduction to the Western philosophical canon.

Beyond Good & Evil by Friedrich Nietzsche-

A vanguard of the Existential movement, Nietzsche discusses the dichotomy of morality, separating it from religion and the self. He explains that essentially all good and evil men are the same; the only thing separating them are actions and not any predispositions of character. Thereby rejecting the oversimplification of morality and the idea that being pious and ‘good’ went hand in hand.

The Prince by Niccolo Machiavelli–

This fundamental work of political philosophy has immortalized Machiavelli. His moniker has been transformed into a verb because of the pragmatic but sinister formula he details for political success. He writes that in order to retain political power, one must do away with idealism and make way for ruthlessness and practicality. The manifestations of his writing can be seen in elections to courthouses, to boardrooms even today.

The reason to include a religious scripture as a part of this list is the profound philosophy imbued in this section of the epic poem of Mahabharata. It is, in fact, so complex that every successful reading of the translated Sanskrit text will add a new sense of understanding to one’s concept of mortality and duty. It talks about the existential purpose of humans along with our ethical responsibility and correlation between the two. The relative nature of time in the face of duty and virtue.

The iconic line ‘I think, therefore I am’ can be attributed to Descartes; this widely read book is divided into six days of Meditation. First, discarding everything known not to be certain and then through each day establishing certainty in all of the things that can be known for sure. Through his reportage, he highlights the dichotomy between mind and body, signalling the existence of many metaphysical beliefs, such as a higher power.

Zen and the Art of Motorcycle Maintenance by Robert M Pirsig–

This is arguably that one philosophy book that our generation should read. Through this fictionalized autobiography, Pirsig highlights the most critical question plaguing mankind today. Has technology alienated us from the world? A motorcycle journey taken by father and son serves as the backdrop to the exploration of various philosophical principles, all in an attempt to give its reader a moment of self-reckoning.

The Dialogues of Plato by Plato –

This list would be remiss without including the true iconoclast, Plato. There can be no philosophy without Plato and Socrates. The first four dialogues recount the trial and execution of the latter, which altered the course of Plato’s life and that of modern Western thought. The rest of the dialogues are broader commentaries on virtue and love, self and society, and knowledge and truth. The discussion on these topics, though not linear, is in the way of multitudinous opinions, leaving the reader to decide and exert his power of self.

This book is the foundation of Chinese philosophy and ideals, the basis of Taoism. It is the guiding force of spirituality and philosophy in the lives of millions of people even today. It talks about the importance of balance, peace and forgiveness, about putting collective ideals before oneself to create a harmonious society. The esoteric writing style adds a layer of beauty and complexity to the 2500-year-old Taoist wisdom.

The Myth of Sisyphus and Other Essays by Albert Camus–

Another Existential gem of writing, Camus introduces the concept of Absurdism in this book. Is life without order or meaning worth living? It ponders on the question of the futility of existence in a chaotic universe. But all is not as bleak as it seems; there is hope to be had in a life of authenticity and dignity.

Devanshi Shanay Shah, our in-house expert on books and parenting, is currently working on her debut novel. She has a Masters in literature and writing from the University of Cambridge. A voracious reader, she has an appetite for fiction and poetry. In the weekends, she loves to play scrabble, and sip oolong tea while watching old black and white movies. Devanshi is mother to one-year-old Ayesha who doesn’t give her much time for any of the things mentioned above. Please write to her at feedback@vibesofindia.com