Veer Savarkar Was A Live University, He Was An Apt Combination Of Knowledge Of Our Traditions And Arms: Gujarat CM Bhupendra Patel 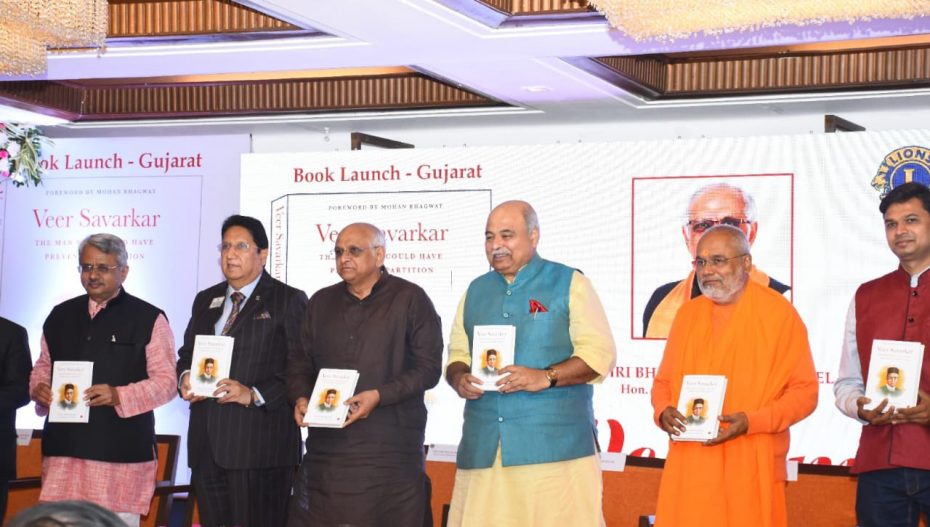 Veer Savarkar had a multidimensional personality and was an apt combination of Shaastra (शास्त्र, Hindu religious treatises) and Shastra(शस्त्र,  weapons), Gujarat Chief Minister Bhupendra Patel said while launching Veer Savarkar: The Man Who Could Have Prevented Partition written by Central Information Commissioner, senior journalist and author Uday Mahurkar. The book is co-authored by Vadodara-based MS University professor Chirayu Pandit. Lauding the efforts of PM Modi in reinstalling the pride of Veer Savarkar that the Congress tried to smother during its regime, the Gujarat Chief Minister dwelt on Savarkar’s ideology and said he was thankful to PM Modi who has personally taken interest to revive Veer’s ideology. The Andaman-Nicobar Airport has been named Veer Savarkar Airport by Prime Minister Modi to showcase Veer Savarkar’s journey of struggle and his significant contribution to the freedom movement of India, the Gujarat CM said.

In a short speech, author Uday Mahurkar said Veer Savarkar was a visionary who refuse to be a part of the Congress despite being invited several times by eminent leaders including Subash Chandra Bose because he (Savarkar) believed that Congress stood for minority appeasement whilst he represented true nationalism. Citing examples of how Savarkar had predicted the birth of Pakistan and the untrustworthiness of China as neighbour, Mahurkar said it was sad that Savarkar’s predictions were ignored then but in introspection, whatever he predicted had come true. Praising Savarkar for his futuristic vision, Mahurkar said how he forecast the enemies of India: both Pakistan and China. While Savarkar highlighted that China should not be trusted way back in 1952 and predicted that China would trespass and usurp Indian territories; it has proven true in 1962 following which the India-Pakistan war took place.

Mahurkar who began his journalistic career from The Indian Express in Gujarat as a sports correspondent told Vibes of India, “Savarkar opposed the idea and repeatedly warned Congress against its appeasement policies, but the Congress didn’t pay attention to repeated warnings by freedom fighter Veer Savarkar. Partition of India happened because of the political appeasement of Congress. Many of India’s security problems would not have existed in the presence of the late activist.”

“Demonising Savarkar was necessary for their political and ideological strategy. Savarkar’s Hindutva is nothing but unalloyed nationalism where religion, caste, and regional pride are secondary to national pride.” he adds.

The 300 page book highlights Savarkar’s vision and how it is relevant in solving the national security problems India is facing today. The book is co-authored by Vadodara-based MS University professor Chirayu Pandit.

Presenting the story of Veer Savarkar’s bravery before the people, the Chief Minister added that Veer Savarkar was a freedom fighter who gave up his life for the freedom of India.  The book highlights the thoughts and efforts of Veer Savarkar to stop the partition of India and Pakistan.

RSS leader of western region Jayanti Bhadesiya congratulated Mahurkar on the launch saying,“All problems related to national security in India were predicted by this freedom fighter. Be it India’s war against China or the attacks by Pakistan, or the violence in Assam; everything was foreseen by Savarkar. He propagated that if the neighbouring nation makes hydrogen bombs, we should come up with oxygen bombs instead of escaping the fight.”

Chirayu Pandit, co-author of the book said, “Steps like building Raam Mandir, revoking Article 370 or celebrating the life and ideology of Savarkar are the steps towards a new India. He is the true architect of Hindutva ideology.”

Former international director of Lions Club, Pravin Chhajed said “Lions Club is very proud to support the noble work. Veer Savarkar’s life is a lesson for everyone. He is the icon of the future generation.”

The book is available on Amazon.  https://amzn.to/3nNRaI5