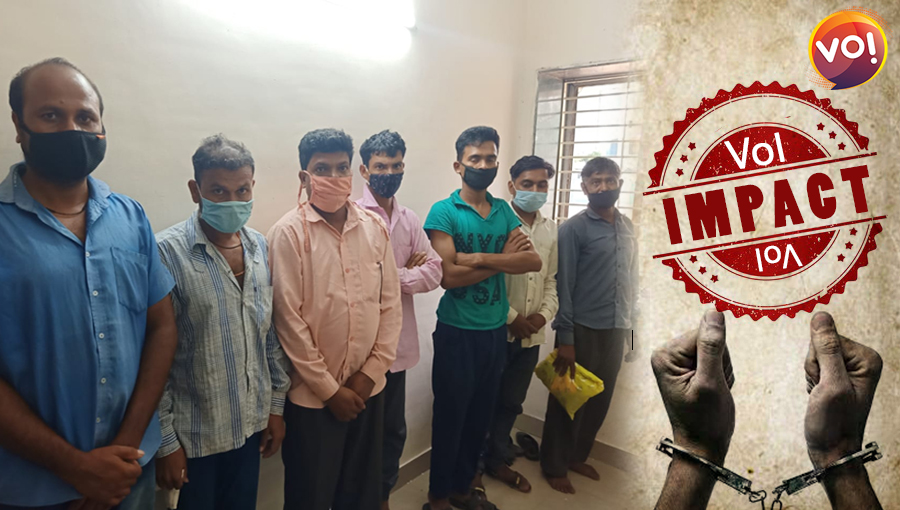 After Vibes of India (VoI) broke the chilling story of an Adivasi woman in Gujarat who was physically and sexually assaulted and made to drink urine of the perpetrators, the Chhota Udepur police sprung into action and arrested seven culprits.

Kudos to Chhota Udepur police for the swift action but unfortunately this is not the end of the story. The Adivasi lady, Vinita ben called up the VoI office. She has left her village for good and is in hiding but she categorically told us, “I am scared of my life. I want to remain alive”.

The Superintendent of Police Dharmendra Sharma told VoI, “The nature of crime is very serious. Though the complainant is illiterate and ignorant, we have added 11 sections of the Indian Penal Code. Today, we have also added IPC 377, which is “unconstitutional and criminal offences involving sexual activities against the order of nature”.

It must be noted that there was no mention of forced oral sex and Vinita ben being pressurised to drink the urine of the perpetrators, in the original FIR. VoI was the first to report this heinous crime.

Sharma an IPS of 2014 batch also added that they have arrested seven of the 11 accused named by Vinita ben. They are in police custody, he said adding that investigations are on.

Vinita was reportedly punished by these perpetrators who belong to her own community and are related to her by her son’s marriage. Her son Ajay had a love marriage with a girl called Payal from another village. Payal’s family was not happy. Vinita ben has claimed that Ajay Ajay and Payal did not return home after a registered marriage. According to Vinita ben, Payal’s father, uncles and cousins barged into her mud house and thrashed her, reportedly forced her for oral sex with different men. When she pleaded for water, they forced her to drink their urine. All this happened on a public road at Chichod village.

Vinita ben called up VoI at around 5.30 pm and said she had just received a death threat. She said she feared for her life. “I want to live”. She said she was being pressurised to give up her small piece of land, her home and live-stock. She claimed two people had come to her house last night and had threatened her to withdraw the FIR.

The Police informed VoI that they have arrested seven of the 11 accused named by her under Section 149 for unlawful assembly guilty of offense committed in prosecution of a common object, Section 120 (B) for criminal conspiracy to commit an offense punishable with death, 143 (unlawful assembly), 147 (rioting), 323 (voluntarily causing hurt), 325 (causing grievous hurt), 504 (intentional insult and provocation) and 506(2) (criminal intimidation) of the Indian Penal Code. Four accused are still absconding.

JK Patel, police inspector, Chhota Udepur, in charge of the matter, shared, “We have sent the victim’s reports to Forensic Science Laboratory (FSL) for further investigation. We are looking for the absconding culprits. and Raju Rathod (38), Vipul Rathod (32), Kadubhai Rathod (28), Nitheshbhai Rathod (23), Bharatbhai Rathod (38), Rajubhai Bheekhabhai (38) and Dilipbhai (29) are under police custody. Mashabhai Rathod, Vikesh Rathod, Tersinh Rathod and Rahulbhai are absconding. All the accused and the victim’s families are illiterate.”

Legal advisor to the victim, Ashok B Rohit is a practicing lawyer –since 2008—from Bodeli. “The family approached me when they had nowhere to go. I extended help as it was a clear case of injustice and violence towards the family. Seven have been arrested but out there are still four culprits to be arrested”, Rohit claimed.

JK Patel, the police inspector said, “We are willing to give police protection if needed.”

Vinita’s 21-year-old son Ajay had a love marriage with Payal (name changed),19. The registered marriage was not acceptable to Payal’s family. Vinita told VoI that her son got married earlier this month on June 12. Payal also is a tribal from Palsanda village near Surat, Vinita added.

According to Vinita, four days after the marriage, Payal’s family barged into their make-shift hut and did verbal and physical violence on her. There were 11 people led by Payal’s father Rajubhai Palsanda.

Earlier SP Chhota Udepur, Dharmendra Sharma, said that they have registered the case and are investigating it. There is no question of condoning such heinous crimes.

“On the evening of June 26, my mother and our whole family went to the Chhota Udepur police station went to the police station to give details on the registered FIR. We narrated about the verbal and physical abuse of the 11 men who barged into our house. Due to the constant death threats, we were scared to return home after registering the case. We even took rescue at a safer place but, we do not have resources to go anywhere but to our makeshift hut,” said Vinita’s daughter who is nursing her mother at home.