Warehouse in A’bad Catches Fire; Loss of 50 tons of Material 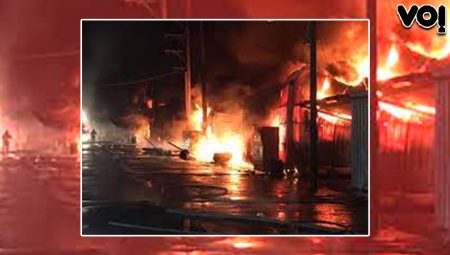 A fire broke out at a warehouse of Capsun Resource Corp Company this afternoon at around 4:00 pm. The factory is located in an industrial pocket adjacent to Changodar Highway in Sanathal area of Ahmedabad district.

The company, manufacturing industrial water coolers, had 50 tons of raw material at the warehouse which was burnt to ashes. The Ahmedabad fire safety officials said that fortunately no one was injured in the accident.

The first call to the fire department was made at around 4:10 after the fire was detected at godown No. 437, while regular surveillance.

A senior official of the Ahmedabad Municipal Corporation’s fire safety department said that nine Gajraj water tankers, a fire-fighting tanker, four command control vehicles and more than 40 fire-fighting personnel were rushed to the spot. Seven water cannons were used, after which the fire was finally under controlled.

The cause of the fire is unknown and teams from the police and forensic science laboratory have also arrived.