Who Are Eight Gujaratis Included In Padma Awardees List? 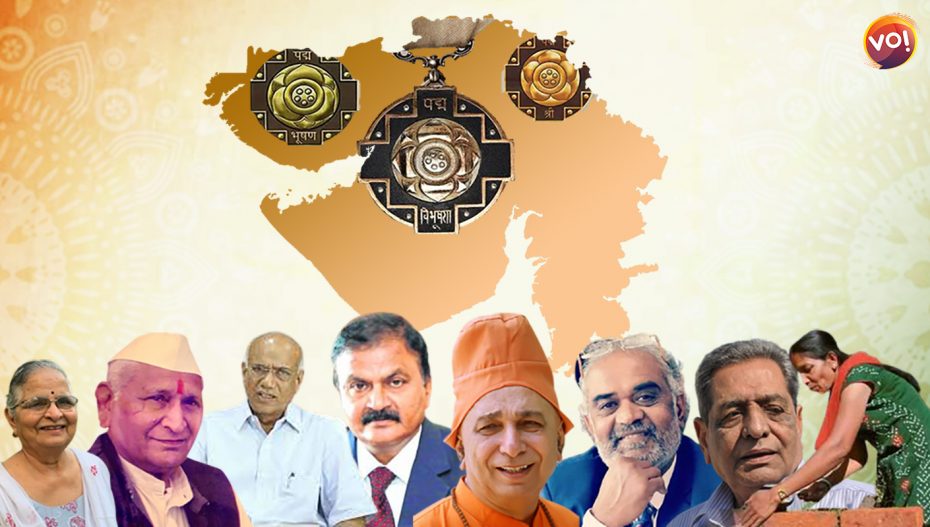 Like every year, the Government of India will confer upon the nation’s highest civilian awards to 128. The awards are in the category of Padma Vibhushan, Padma Bhushan and Padma Shri. This list includes as many as seven Gujaratis.

These awards will be conferred upon by the President Ram Nath Kovind at a ceremonial function held at his official residence – the Rashtrapati Bhawan around March or April each year.

India’s first Chief of Defence Staff, Bipin Rawat, who passed away last month in a horrific chopper crash, has been honoured posthumously with Padma Vibhushan – the country’s second-highest civilian award.

Vaccine makers – Cyrus Poonawalla of the Serum Institute and Krishna Ella and Suchitra Ella of Bharat Biotech – have been honoured with Padma Bhushan.

The heads of tech giants Microsoft and Google Satya Nadella and Sundar Pichai have been named for the Padma Bhushan honours.

Sauji Dholakia is a diamond businessman from Gujarat’s Surat city has been also named in the Padma Awards list for 2022 released by the Ministry of Home Affairs. The businessman has been conferred with Padma Shri award for year 2022.

Swami Sachchidanand is a well known saint and a writer from Gujarat. ‘My experiences’ and ‘motivational occasions of foreign travel’ are his characteristic texts. Bharatiya Darshano , Sansar Ramayana, Vedanta Samiksha etc. are spiritual and cultural texts.

Khalil Dhantejvi was born as Khalil Ismail Makrani on 12 December 1935 at Dhantej, a village in Vadodara, Gujarat. He adopted his pen name Khalil Dhantejvi after his village Dhantej. He passed away on April 4, 2021 at his Vadodara based home. Dhantejvi received the Kalapi Award in 2004 and the Vali Gujarati Gazal Award in 2013. In 2019, he received the Narsinh Mehta Award. Sadgi, Saransh (2008), Sarovar (2018), Sogat, Sooryamukhi, Sayba, Sanvariyo, Sagpan, Sopan, Sarangi are some of his poetry collections.

Ramilaben Gamit, is of Taparwada gram panchayat in Gujarat’s Tapi District, she was on a quest to make her village free of defecation and she succeeded on doing that and even received Swachh Bharat Puraskar from the Prime Minister himself.

Guruprasad Mohapatra had played a key role in several projects including the Sabarmati Riverfront and had introduced “model roads” in Ahmedabad.He served as the chairman of Airports Authority of India (AAI). A 1986-batch IAS officer of Gujarat batch, Mohapatra was one of the IAS officers who moved to Delhi after Narendra Modi became the Prime Minister.

Dr. J. M. Vyas (M.Sc., Ph.D., LL.B.) is working as the Vice-Chancellor of Gujarat Forensic Sciences University – Gandhinagar. He worked as the Director for the Directorate of Forensic Science – Gujarat State, from 1993 until 2009 and is also currently holding the additional charge of the same. He was awarded the President’s Police Medal for meritorious services in the field of crime investigation, on the eve of Republic Day, in 1997. He was also adjudged as the Best Forensic Science Laboratory Director of the country and was awarded a Commendation Certificate by the Hon’ble Deputy Prime Minister at the 15th All India Forensic Science Conference, in 2004.

Dr Lata Desai founded the Society for Education, Welfare and Action Rural, along with her husband. She returned from US and fully dedicated her life to rural development in Jhagadia, Bharuch.

Malji Bhai Desai, associated with the Gandhi Ashram at Zilia in Patan district and is also a former MLA and has dedicated seven decades of his life to public welfares.