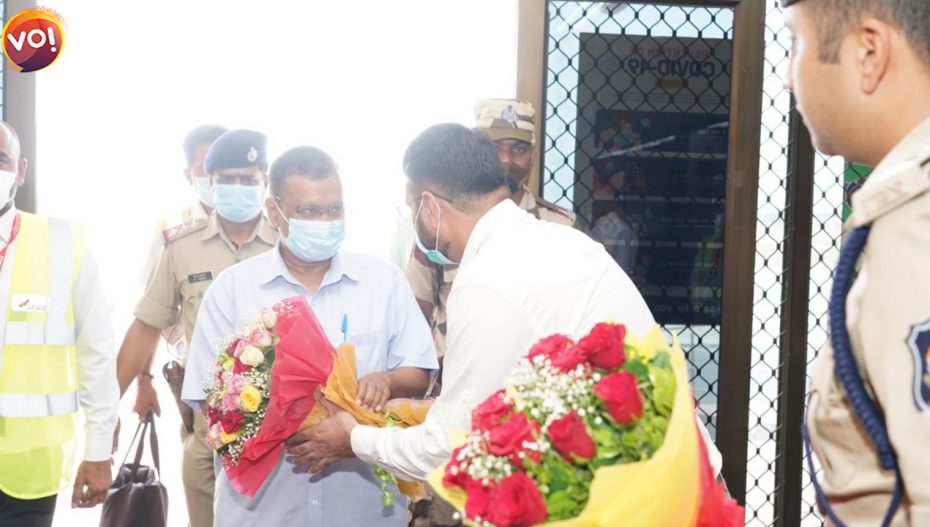 Just a day after Congress leader Rahul Gandhi’s visit to Dahod, Aam Aadmi Party (AAP) supremo Arvind Kejriwal is in the state to address a rally in Rajkot. He was welcomed by state party President Gopal Italia at the airport. Kejriwal will be meeting with the local leaders and activists this afternoon and address a public meeting around 7:00 pm.

Later in the day, Kejriwal will also hold discussions with the local business houses and entrepreneurs, where he is expected to get a ground-level understanding of the trade affairs. Following this, the AAP leader will hold a press conference and answer questions from the media persons. It is around seven in the evening that Arvind Kejriwal will address a rally that will be attended by scores of locals.

At the end of the day, Kejriwal will meet with the state party leaders and officials, likely to discuss the scenario as well as draw a roadmap for the assembly elections. He will be staying in the city for the night and leave for Delhi in the morning.

This is Kejriwal’s third visit to the state in past two months. Kejriwal along with Punjab CM Bhagwant Mann had held a roadshow in Ahmedabad in early Aprile. On May 1, on the Gujarat Foundation Day, the Delhi Chioef Minister addressed the Adivasi Sankalp Mahasammelan in Chanderia village of Bharuch district. Bharatiya Tribal Party (BTP) Founder Chhotubhai Vasava was also present at the event.

As Gujarat prepares for assembly polls later this year, tribal community in the state has been the focus for all the parties. While Bharatiya Janata Party’s (BJP) Narendra Modi addressed the Adivasi community in Banaskantha district last month and Rahul Gandhi launched the Adivasi Adhikar Satyagrah Campaign yesterday.

Meanwhile, PM Narendra Modi and Union home minister Amit Shah are expected to visit Gujarat at the end of this month.