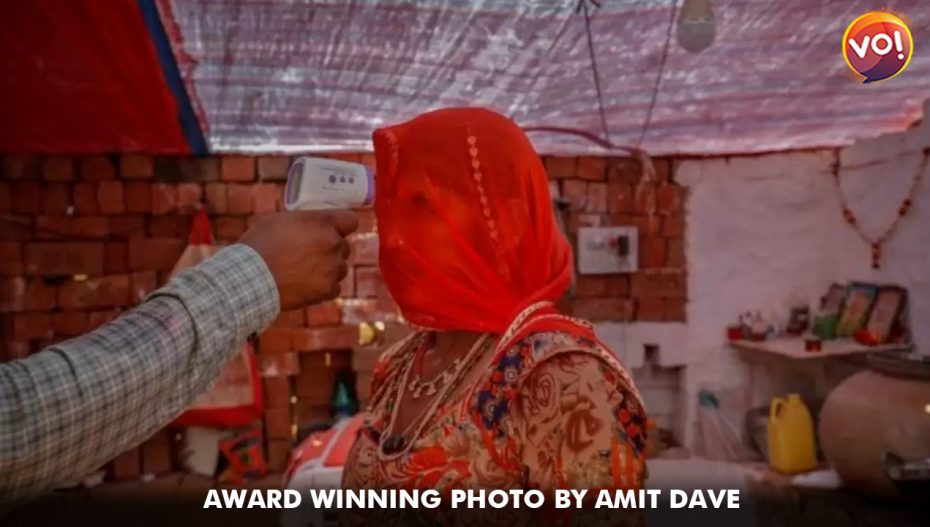 On Monday, Columbia University announced the Pulitzer Prize in Feature Photography to Amit Dave. Dave is a senior photojournalist for Reuters in Gujarat. His breaking news photography showcasing the unfathomable COVID pandemic in India won him the Pulitzer award.

Amit Dave’s poignant image of a brick kiln worker during Covid-19 exhibited cohered intimacy and tragedy of the pandemic. The picture portrays a healthcare worker checking a woman’s temperature inside her hut. Dave clicked the photograph during a coronavirus vaccination drive for brick kiln workers of Kavitha village on the outskirts of Ahmedabad. Moreover, the woman’s face remains covered with a veil of her saree as she gets her temperature checked.

On the recommendation of the Pulitzer Prize Boards, Columbia University awarded Amit Dave the Pulitzer Prize worth 15,000 dollars. Dave has been a photojournalist for about three decades now. His career started as a photographer with Gujarat government magazine. Later, he worked with local newspapers before joining the Indian Express.

Amit Dave joined Reuters, an international news agency, in 2002. He has covered the aftermaths of an earthquake and drought in Gujarat. Further, he covered the Indian Ocean Tsunami in South India. Currently based in Ahmedabad, the industrialised city in the west of Gujarat, Dave covers local and national projects for Reuters.

Along with Dave, Columbia University has given Pulitzer Prizes to Adnan Abidi, Sanna Irshad Mattoo, and the late Danish Siddique of Reuters for their exceptional shots covered during the coronavirus pandemic.