Arvind Kumar Sharma misses the bus in UP ministry 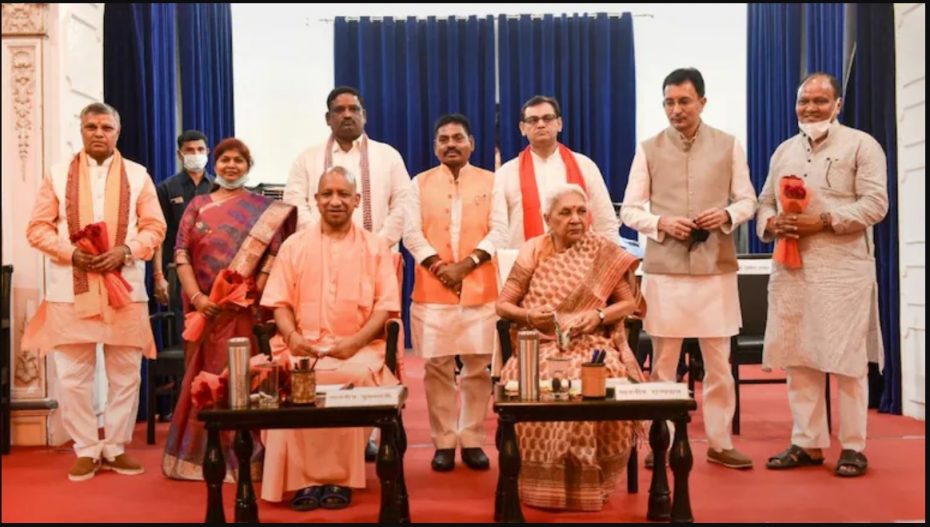 Arvind Kumar Sharma, the former Gujarat bureaucrat who was Prime Minister Narendra Modi’s “eyes and ears” in Gandhinagar, missed the bus in Uttar Pradesh. Sharma, who joined the UP legislative council in January 2021 after resigning from the civil services, was not inducted as a minister in possibly the last cabinet expansion that was carried out by Yogi Adityanath, the chief minister, this evening.

When Sharma left the IAS to become a full-time politician in UP, his home state, the belief was he would shortly become part of the Adityanath government and function as a proxy for the Centre at Lucknow, in the run-up to the assembly elections scheduled to be held in February-March 2022. The word in BJP circles in Delhi and Lucknow was Sharma—who served as an additional secretary in the Prime Minister’s Office and as secretary, micro, small and medium industries before resigning to chart a political path—was tipped to become a deputy chief minister in UP. There are already two deputy CMs, Keshav Prasad Maurya and Dinesh Sharma. But neither is perceived as “effective” in serving Delhi’s requirements.

However, Adityanath, who has emerged as a law unto himself unlike the other CMs of the BJP, most of who owe their positions to the “high command”, consistently resisted the Centre’s pressure to induct Sharma. Sources in the UP government maintained that Adityanath feared Sharma would be “interventionist” and “pro-active”, unlike Maurya and Sharma who remain confined to their areas of responsibility.

Sharma belongs to the Bhumihar caste, which ranks next to Brahmins in the social hierarchy and matters in parts of east and west UP. He himself comes from east’s Khaja Kurd village in the Azamgarh district. The BJP needed a higher upper-caste presence in the government after Brahmins, who constitute seven to eight per cent of the voting population, were reportedly upset with Adityanath’s “pro-Rajput” image, reflected in his choice of bureaucrats and police officials. There was a sense that not only were Brahmins “under-represented” in officialdom but they were also targeted by the police for harassment and intimidation. Despite being vastly lesser in numbers than the Other Backward Classes (OBCs) and Dalits, Brahmins punch above their weight as opinion-makers and social influencers. Originally a core vote base of the Congress, post-1989, Brahmins threw in their lot with the BJP in almost every election, barring those in 2007 and 2012 when they rooted respectively for the Bahujan Samaj Party (BSP) and Samajwadi Party (SP). Sensing the cracks in the BJP’s Brahmin support, the BSP and SP launched campaigns to win over the community.

To try and placate the Brahmins, the upper caste quota in the Adityanath ministry went to Jitin Prasada, the former Congressman who left the parent party and joined the BJP earlier this year. Prasada was also nominated to the legislative council today with three other members. Sources said Sharma also missed the opportunity because, in the Brahmin-Bhumihar cost-benefit analysis, it was “more important” for the BJP to address the Brahmins and, therefore, Prasada, who is the son of the late Jitendra Prasada, political adviser to PV Narasimha Rao, was considered “more appropriate”. Prasada lost the elections he contested since 2014 but hoped to make the cut in the 2022 polls as a BJP candidate.

Indeed, caste was the main determinant in today’s exercise. The BJP draws its electoral strength principally from the non-Yadav OBCs who make up a huge swath of the population across the state. Of the seven inductees, three are OBCs, two are non-Jatav Dalits and one is from a scheduled tribe. The reason for picking non-Jatavs is the same as going for non-Yadavs: if the Yadavs have been more or less with the SP, the Jatavs too largely root for the BSP.

Among the notable inclusions was Chhatrapal Singh Gangwar, a legislator from Bahedi, Bareilly. Santosh Gangwar, the Bareilly MP, was dropped as a central minister in the last cabinet reshuffle/expansion carried out by Modi. An eight-time MP, the BJP reportedly thought it was time to bring in a “new” face in the region that is dominated by the OBC Kurmis, the caste to which the Gangwars belong. Therefore, Chhatrapal Singh is seen as Santosh Gangwar’s replacement.

Sanjay Nishad, who heads the Nirbal Indian Shoshit Hamara Aam Dal or NISHAD, denoting the fisherfolk caste, is a BJP ally. Last week, the NISHAD formerly sealed its partnership with the BJP in the presence of Dharmendra Pradhan, the central minister who was put in charge of UP. Sanjay Nishad was expected to get a berth but he did not. He was nominated to the legislative council today but to fill the Nishad caste quota, the BJP brought in its own MLA, Sangeeta Balwant Bind.

Although Adityanath reinforced his supremacy in UP, the final test will come when tickets have to be distributed. Sharma is a vice-president in the UP BJP. Although a vice-president’s post is nominal, sources said as a “de facto” representative of the Centre in the party organisation, he was expected to sound out Delhi’s mind and choice in the matter.