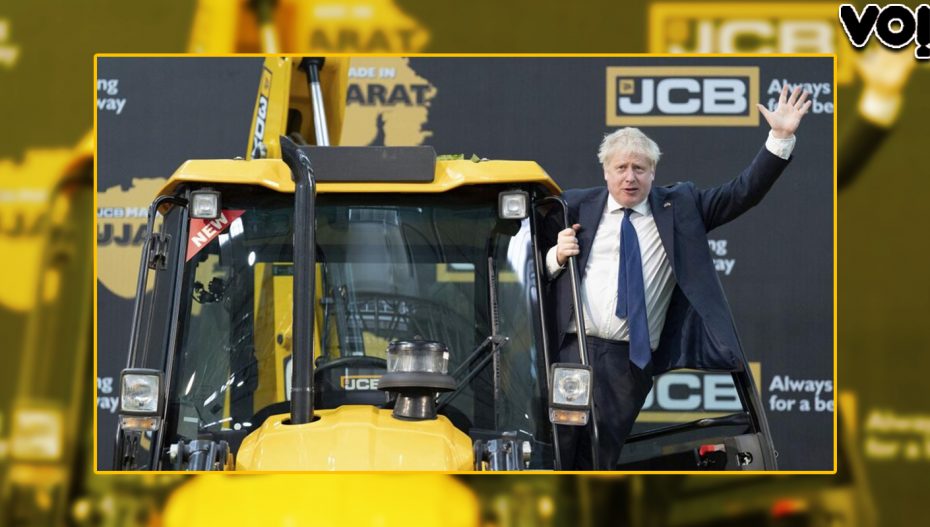 While the ruling BJP’s “bulldozer politics” is the new tactics to align any perceived dissent, images of British Prime Minister Boris Johnson on Thursday clambering on to an excavator sparked outrage in India and the United Kingdom.

BoJo, who is on a two-day trip to India, was visiting a new factory near Vadodra run by heavy-construction equipment manufacturer JCB. He hopped onto one of the excavators manufactured in the plant, a day bulldozers razed Muslim-owned shops and homes in Delhi’s Jahangirpuri neighbourhood.

In recent weeks, several BJP-ruled states have used bulldozers to summarily demolish properties of people “alleged” and “suspected” offenders, even though they have not been convicted by a court or without giving them a chance to appeal.

In this form of collective punishment, entire families have been penalised for actions that a single member is alleged to have committed. There is no legal basis for such arbitrary action, experts say.

Wednesday’s demolition drive in Jahangirpuri came four days after religious riots in the area. On April 16, violence erupted in the working-class neighbourhood, after a procession organised by the Bajrang Dal on Hanuman Jayanti clashed with Muslims as it went past the mosque.

Delhi was not the first place where the BJP has pressed bulldozers into service to destroy Muslim property. In the first two weeks of April, when the Ram Navami, was observed, several Hindtuva outfits organised rallies in which armed participants shouted abusive, provocative slogans, as they passed by mosques or through Muslim-dominated areas in some states. Violence was reported from five states.

On April 11, the homes and properties of alleged rioters in Khargone in Madhya Pradesh were razed. In Gujarat, too, the Anand district administration on April 15 took to bulldozing the homes of those it alleged were to blame for violence on Ram Navami.

In light of these events, Johnson’s JCB plant visit was decidedly odd.

On April 12, United States Secretary of State Antony Blinken had voiced concern over the increase in “human rights abuses” in India. In March, India was called a “partially free” country for the second year in a row in the 2022 report by the United States non-governmental organisation, Freedom House.