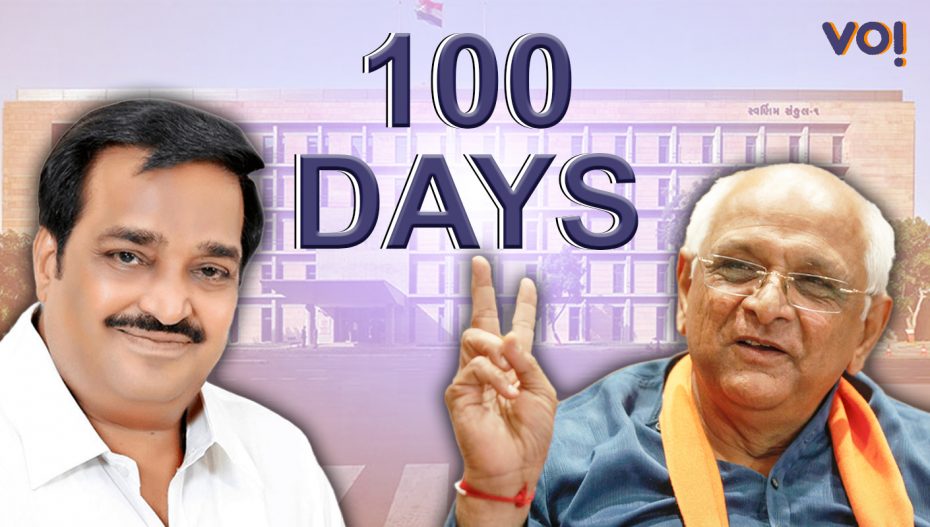 When Bhupendra Patel’s name was announced at a BJP Legislature Party meeting on September 12, 2021, as the new Gujarat Chief Minister in Gandhinagar, he was taken aback. Patel, 59, was sitting in the fourth row among dozens of MLAs like him, in a simple shirt and trouser, no way dressed for the occasion — obviously unaware that in four years of becoming a legislator he would be made the CM.

As expected of him, Prime Minister Narendra Modi did the unexpected when he decided on Patel as the new chief minister. He was quietly picked up from the crowd while half a dozen other names were doing the rounds after Vijay Rupani stepped down.

The low-profile Bhupendra Patel, the first person from Ahmedabad to become the CM, completes 100 days on Wednesday, in the backdrop of the BJP’s first victory in the Gandhinagar Municipal Corporation elections after he took over.

In keeping with the diligence and sincerity expected of a first-timer, Patel was already coordinating with the district administrations in Saurashtra region about the rescue and relief operations after the severe cyclone struck the State while he was yet to be formally sworn in the next day.

When his government was put in an embarrassing spot after leaders of the ruling BJP in various municipal corporations arbitrarily issued removal of roadside eateries and kiosks selling egg and non-veg food items, the chief minister rebuffed it within a few days. Patel stated at a public function that his government had not issued any such instructions and that it could not interfere with the people’s food choices.

And though the paper leak of the government’s head clerks exam drove the BJP to a wall, the Patel Government took no time in shedding its denial mode, conceding that the paper had indeed leaked and immediately ordered a police inquiry.

As many as 24 teams were pressed into the investigations and within three days, arrested 14 people and recovered Rs 30 lakh from them. This was not the case during such paper leaks in the previous BJP regime. Minister of State for Home Harsh Sanghavi led all the decisions relating to the paper leak case. And, most important, he was given a free hand to deal with the situation.

The Bhupendra Patel Government also took credit when successive fast-track judgments were delivered in rape and murder cases of minor girls in Gujarat within a month to 33 days. The home department patted itself in the back for quick police investigations into the sensitive cases and prompt filing of chargesheets that resulted in early disposal of cases in the courts.

Displaying the Ahmedabadi (or Amdavadi) characteristic of softly and diplomatically not according to space to everyone, Patel has ensured he lets the Gujarat BJP President CR Paatil to often have an upper hand in dealing with areas that otherwise would fall in his domain.

Several bureaucrats, otherwise inimical to the BJP regime, wonder who calls the shots but concede that Patel and Paatil are a team that would give the BJP a huge victory in the 2022 elections.

It is no secret that it was the feedback from Paatil, the blue-eyed boy of Prime Minister Narendra Modi, that ensured the removal of Vijay Rupani and his entire team. It was Paatil who introduced Patel as the new CM during the September 12 legislature party meeting. It was CR Paatil, a key backroom boy of Modi during the Varanasi Lok Sabha election campaign, who told reporters authoritatively on that day, “No Deputy CM being appointed now. Names of other ministers would be announced later.”

And, above all, it is CR Paatil who keeps track of the bureaucracy and get things moving in the State Government. It may be recalled that the common grouse among BJP MLAs, MPs and party workers during the Rupani regime was that the bureaucrats didn’t listen to them, the ministers could not control them and they had to run from pillar to post in their own party’s government to get things done.

Paatil has overturned the situation and ensures that all key BJP works are carried out on priority and time and again also warns leaders and ministers tacitly that their performance is being monitored in view of the elections ahead.

The Gujarat BJP chief, in tandem with a “cooperative” Chief Minister, aims to win all the 182 Assembly seats in Gujarat in 2022. Or at least, break former Congress CM, the late Madhavsinh Solanki’s record of 149 seats — something even Narendra Modi was not able to breach.

The biggest advantage they have is a much more weakened Congress party, notwithstanding that it finally has a new president after many months of impasse. AAP is trying to eat into the Congress space, but it lacks the State-level well-oiled network that the BJP has.