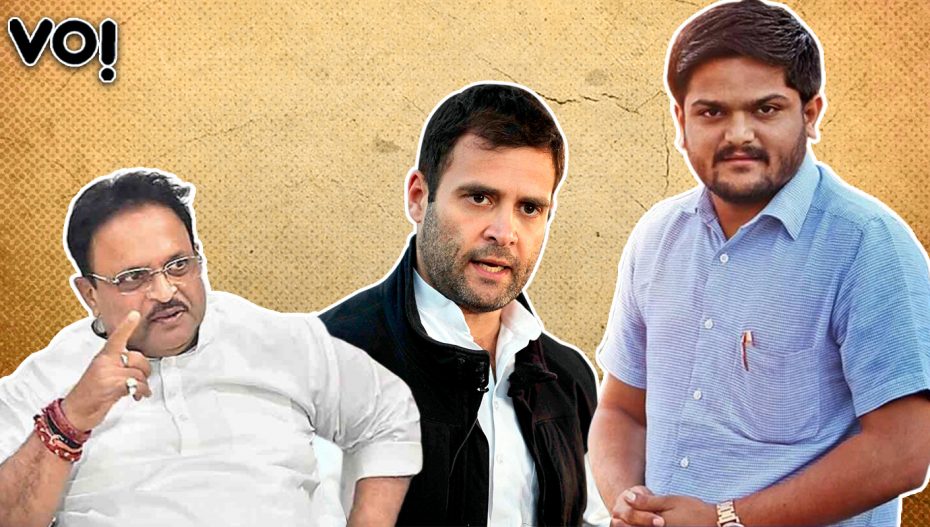 The Gujarat Assembly elections are two seasons away but defections from the state unit of the Congress are becoming noticeable. Promising leaders like Hardik Patel are either displeased about the state of affairs in the party or are leaving it in quick succession.

There is a strong buzz that Hardik Patel is feeling sidelined and is on his way to joining the Aam Aadmi Party.
The exits are working to the advantage of the Aam Aadmi Party (AAP). Indranil Rajguru has joined AAP today. According to sources, more than 20 Congress leaders are in touch with the Aam Aadmi Party but strategists of India’s grand old party have not yet given this issue the urgent attention it deserves.
Hardik Patel has voiced his displeasure by saying that despite being the working president of the Gujarat Congress, he is not included in the decision-making process. He was not consulted during the recent appointments of General Secretary, Vice President and District Presidents in Gujarat Congress.

Hardik has accused Congress of insulting Patidars and Khodaldham Trust president Naresh Patel. The Congress leaders have resented his suggestion that PAAS (Patidar Reservation Committee) be given a share in the party. Unfortunately, Gujarat Congress is not ready to give much consideration to his suggestion.

This is somewhat strange as Patel is considered close to the Gandhi family. Hardik has openly voiced his opinion that the Congress is not making optimum use of its leaders. He has begun questioning the decision-making ability of the high command. On April 6, Hardik did not even attend the core committee meeting held. He was not included in the discussions on the new road map of Gujarat Pradesh Congress Committee.

Such unaddressed issued have led to a tug of war scenario between Gujarat Congress AICC in-charge Dr Raghu Sharma and Congress state working chief Hardik Patel. Raghu Sharma has chosen not to directly question the decision-making ability of the Congress high command.

Hardik pointed out that the senior Congress leadership says that anybody who expressed displeasure is told by the party leadership that whoever wants to leave can leave . Now the Congress leaders want me to leave the party, he said.
Hardik Patel also tweeted, “Speak the truth because I want the good of the party. The people of the state expect from us and we cannot live up to that expectation, then what is the meaning of this leadership! Until today, I have done the work of giving the best to the party and will do it in the future. I am hungry for work and not for the post.

Hardik’s statements have infuriated Raghu Sharma who reported to Congress leader Rahul Gandhi that if Hardik has any problem regarding the decisions, he should convey it to the Congress state chief, Jagdish Thakor.

It seems that the party high command is now trusting Raghu Sharma more than Hardik in the case of Gujarat. That explains why Hardik is not being heard and accepted.
During the local body elections of December 2020, the wife of Hardik’s lawyer Sanjay was not given a chance to contest the elections. The Patidar Amanat Andolan Samiti (PAAS) openly supported the AAP. As a result, 27 AAP councilors were elected to the Surat Municipal Corporation and the Aam Aadmi Party entered Gujarat politics. Even today PAAS and Hardik share a political symbiosis. Congress is well aware of this.

Gopal Italia, the state chief of the Aam Aadmi Party and Hardik’s ally in the Patidar reservation movement, told Vibes of India “If Hardik joins AAP from Congress, it will be a matter of happiness”.

Hardik will join AAP soon, this is evident from his recent remarks.

On the condition of anonymity, a senior Congress leader said that Congress has always attached importance to Hardik. In the recent assembly elections, he was the only leader of Gujarat who was not only included in the list of star campaigners of Uttar Pradesh and Punjab, but also given a helicopter. But what was the result? He was also a star campaigner in Bihar.

Sources said that in Gujarat, he wants that Patel is declared the Chief Ministerial candidate. Most of the party leaders are not receptive to his suggestion of having a single face as a candidate for the Chief Minister. Naresh Patel has not even decided whether he wants to join politics or not. Hence the Congress leaders should work hand in hand with the party workers who have not seen the Congress in power for the last 27 years.