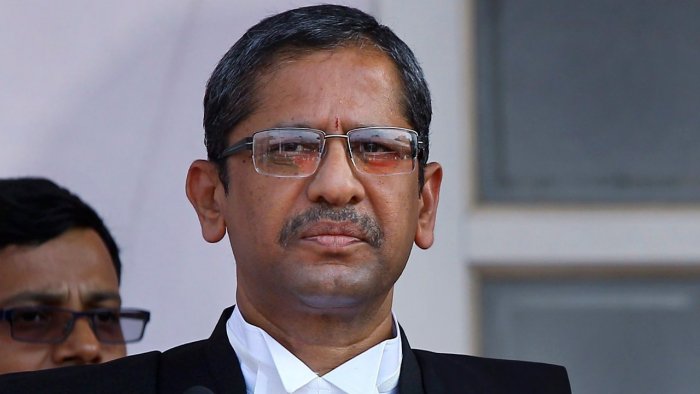 While the chief justice has made some important decisions, there are a number of pending constitutional matters before him.

Chief Justice of India N.V. Ramana, also famously known as the people’s judge, completed one year in office on April 24. During his first year, he has been vocal with his criticism of the government while speaking at public fora and also tried to decide matters of constitutional salience. Some of the important matters taken up by him include:

Retired Major General S.G. Vombatkere had filed a plea challenging the validity of Section 124A of the Indian Penal Code (IPC) – sedition – for violating the freedom of speech and expression. During the hearing, CJI Ramana expressed concerns about the misuse of the law and the lack of accountability on the part of the executive.

The matter is being heard again today.

CJI Ramana had granted protection from arrest to two advocates and one journalist who were booked under the Unlawful Activities (Prevention) Act with regard to their social media posts about the communal riots that had erupted in Tripura on October 2021.

The CJI-led bench recently cancelled the bail granted to Union minister Ajay Mishra’s son Ashish Mishra by the Allahabad high court. Ashish Mishra was the main accused in the Lakhimpur Kheri violence in which eight people were killed after being allegedly mowed down by his vehicle.

The court had also remarked that the victims not being properly heard and the tearing hurry shown by the high court merits the setting aside of bail order. The matter has been remanded back to the high court for fresh consideration of the bail application.

While it seems that Chief Justice Ramana has made efforts to take up important matters and dispose of them, the Supreme Court website shows there still are about 422 constitutionally important matters that are pending. Out of these 422 matters, 52 are main matters and 370 are connected matters. With his tenure coming to an end in the next four months, on August 26, 2022, it is difficult to determine whether the matters will be taken up.

The following are a handful of the constitutionally important matters that are pending before the apex court, some of which require urgent hearing.

4. Challenge to the Citizenship (Amendment) Act

The Citizenship (Amendment) Act, passed in December 2019, provided citizenship to religious minorities from Pakistan, Bangladesh and Afghanistan, effectively excluding all Muslims from applying for citizenship.

People opposing the CAA believed that it was part of a plan by the Bharatiya Janta Party to strip Indian Muslims of citizenship and therefore it was challenged before the Supreme Court. There were at least 150 petitions challenging the vires of the Act. The apex court had issued notice in December 2019 but declined to give interim relief in the matter.

There has been no progress in the matter ever since. The matter has been pending for two years now.

In August 2019, Articles 370 and 35A – the provisions that provided a special status to the erstwhile state of Jammu and Kashmir – were nullified. The first challenge was made before the Supreme Court on August 9, 2019. The matter was heard by then Chief Justice Ranjan Gogoi, Justice S.A. Bobde and Justice Nazeer on August 28, who then referred the matter to a five-judge constitution bench. There were also talks of referring the matter to a seven-judge bench, but the five-judge bench in 2020 held that there is no such need to constitute a seven-judge bench in the present matter.

The matter has been pending ever since until recently, when CJI Ramana said he would soon take up the matter.

On April 25, the matter was mentioned by senior advocate Shekhar Naphade before a bench headed by CJI Ramana, saying that the delimitation exercise in Jammu and Kashmir has begun. To this, CJI Ramana said that the matter is before a five-judge bench and he will have to ask them, as some retirements are also due to take place.

For now, he has said that the matter may be taken up post vacation.

The electoral bond scheme was notified by the Union government on January 2, 2018. An electoral bond is like a promissory note, a bearer instrument payable to bearer on demand. An electoral bond can be used by an individual or a corporation incorporated in India to make donations to political parties.

The present electoral bond scheme was introduced by the Finance Acts, 2017, which in turn amended the Reserve Bank of India Act, the Income Tax Act and the Representation of People Act for enabling the said scheme.

The Finance Act brought a system of electoral bonds to be issued by any scheduled bank for electoral funding purposes. Since this statute was passed as a money bill, the Rajya Sabha’s assent was bypassed.

This move has been challenged before the Supreme Court. The main challenge to this scheme is that it should not have been introduced as a money Bill.

The court denied interim relief in the matter. The matter has been pending since.

There is a challenge to a Karnataka high court judgement before the Supreme Court, wherein the high court had upheld a government order that effectively bans girls from wearing hijabs in schools throughout Karnataka.

A plea was first filed before the Supreme Court at the interim stage, when the Karnataka high court had passed an interim order banning all religious garments inside schools till the matter is pending before it. The plea was filed by school girls seeking a stay on the interim order, claiming that the same is violative of their right to equality, right to freedom of speech and expression, and right to a life with dignity provided under Article 14, 19 and 21 of the constitution respectively. The Supreme Court, however, was of the view that the matter must not be interfered with at the interim stage.

Later when the high court upheld the government order, the petitioners moved the Supreme Court challenging the same. The matter was mentioned before a bench headed by CJI Ramana, who orally observed that the matter will be taken up post the Holi holidays. However, it has been a month since Holi holidays and the matter has still not been taken up.

A two-member Supreme Court bench led by Justice M.B. Lokur, in a significant order in July 2017, had asked for a Central Bureau of Investigation probe into the alleged 1,528 cases of extra-judicial killings in Manipur between 2000 and 2012 by the Indian Army, Assam Rifles and Manipur Police.

After Justice Lokur’s retirement in December 2018, the apex court is yet to reconstitute a fresh bench to take forward the case of immense significance to upholding the right to life of a common citizen in a disturbed area brought under the Armed Forces (Special Powers) Act.

In July 2019, responding to an application filed by the petitioners of the case, a bench headed by then CJI Ranjan Gogoi had said, “We will try to reconstitute the bench.” No effort has been noted even during CJI Ramana’s tenure till date on that count.

(With inputs from Sangeeta Barooah Pisharoty)