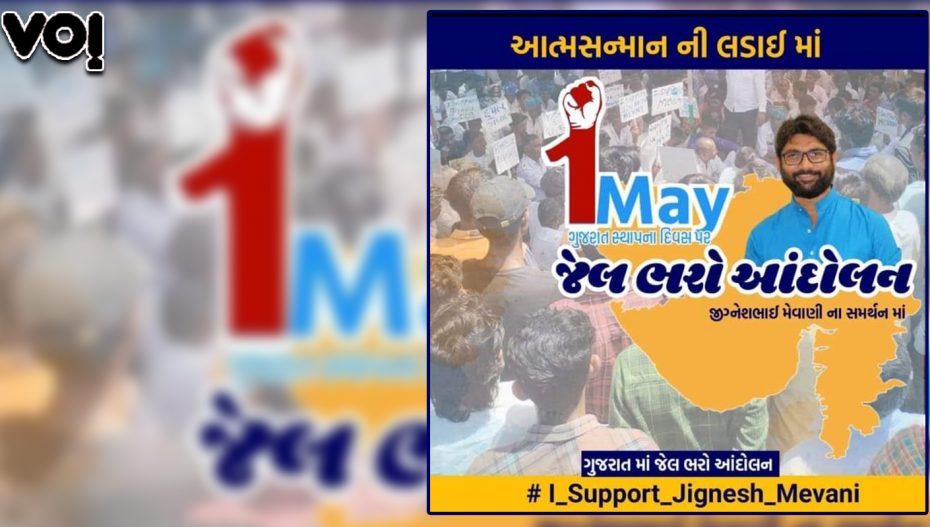 Rashtriya Dalit Adhikar Manch today said that they will be protesting against the Dalit leader Jignesh Mevani’s arrest by organizing a state-wide agitation in Gujarat on May 1. ‘Jail Bharo Andolan’  will aim to support the independent MLA’s fight for the welfare of the people belonging to scheduled casts and tribe as well as demand his release from custody.

Interestingly, May 1 is also the foundation day of the state of Gujarat.

This news comes as the National Commission for Scheduled Castes also issued a notice against the Mevani’s arrest, demanding action against the police in Assam and Gujarat for violating his fundamental rights. The Dalit right’s body, on behalf of a petitioner, has claimed that arrest of Mevani was done unconstitutionally, violating the MLA’s human rights.

Mevani was arrested in Palanpur town of Gujarat by the Assam Police on April 20 as a complaint was filed by a leader of BJP in Assam for his tweets about Prime Minister Narendra Modi. It is said that Mevani’s tweets were provocative and were meant to spur communal conflict in the country.

Following the arrest, Mevani was taken to Ahmedabad and was flown to Assam. Although he was given bail on Monday, he was re-arrested in a different case of alleged assault of a police official. Yesterday, an Assam court rejected his appeal for bail in the assault case.