Know The Person Who Translated Valmiki’s Ramayana Into Gujarati 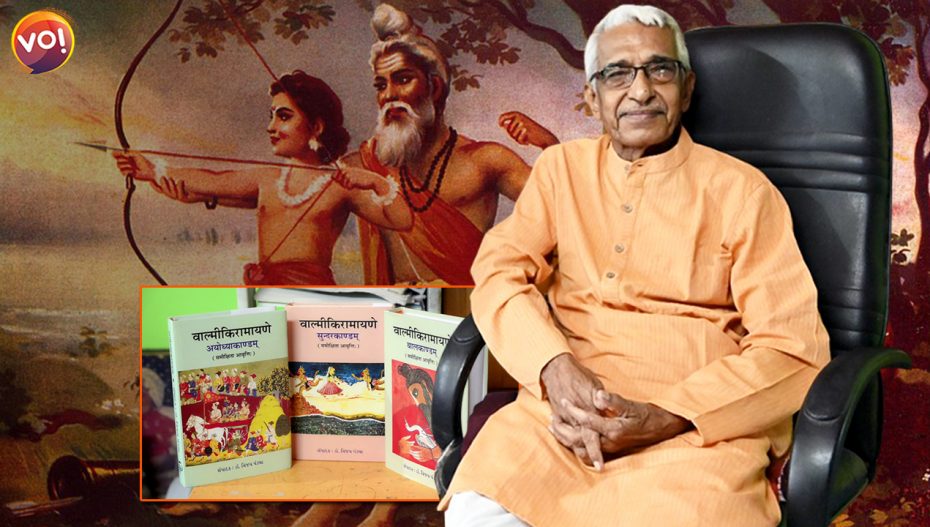 Sincere devotion and a belief in the goodness of the end are key ingredients to long-term undertakings. For 78-year-old Prof Vijay Pandya, the task began at 62. After 16 years of hard work and perseverance, he has translated the epic, Valmiki’s Ramayana, into his mother tongue. His magnum opus brings pride to all Gujaratis!!

Having started in 2006, he completed the work in December 2020. Did he ever tire? “Yes. I did get tired and at times, the entire thing seemed daunting. But not even once did I think of giving up. I guess my devotion towards the text was a guiding light,” shares the learned Dr Pandya.

Who is Prof Vijaya Pandya?

With a Masters degree in Sanskrit, Dr Pandya went on to complete a doctorate from Somnath Sanskrit University. Over and above, his scholarly paper won him the honorary title “D. Litt.” Dr Pandya has been a professor at Calorex Teachers University in Ahmedabad. He has contributed vastly to Sanskrit studies at Bhasha Sahitya Bhavan of Gujarat University. Noting his significant contribution to the language, former Indian President Pratibha Patil felicitated him with the Puruskrit Samman.

The idea of translating the Valmiki Ramayana into Gujarati:

In course of his work and seminars, he has travelled widely across India. “I often checked around to see if the original has been translated into any Indian language. Unfortunately, the original poetry had never been translated. What we have are short kathas (stories) in way of wisdom nuggets from the sagacious manuscript,” adds Dr Pandya

Among the various translations and interpretations of the Ramayana, the core remains sage Valmiki’s original text. In its extant form, Valmiki’s Ramayana is an epic poem of some 24,000 verses, divided into seven kāṇḍas (Bālakāṇḍa, Ayodhyakāṇḍa, Araṇyakāṇḍa, Kiṣkindakāṇḍa, Sundarākāṇḍa, Yuddhakāṇḍa, Uttarakāṇḍa), and about 500 sargas (chapters).

“Sanskrit is a difficult language and I am hoping my work helps Gujaratis readers delve deep into their rich heritage and traditions,” shares the author.

Dr Pandya briefed that not many are aware of a convention held in 1981 by MS University.  Subject matter authorities and Ramayana experts were part of the meet at the Oriental Institute (Vadodra). “Manuscripts and versions of the ancient text were sourced from varied parts of the country. The material was very carefully studied and every incident narrated in the text analyzed in the light of reason and possibility. Of the 6,000 verses deliberated upon, about 200 were dismissed. Some on grounds of metaphorical exaggeration and some for want of more resources to support the alluded passage,” he explains.

Post the convention, a revised version of Maharishi Valmiki’s text emerged with a total of 18,605 verses, divided into seven kāṇḍas.

His work speaks volumes about his efforts. The poetic Sanskrit verses have been translated into Gujarati verse and then follows the prosaic explanatory text (also in Gujarati). Sheer marvel is the obvious response for any first-time reader of his volume but the humble scholar says: “No one had done it before. Lord Ram chose me and blessed me with the fortitude to accomplish it too.”

For instance, the portions describing Sita’s agony at being torn apart from her husband, employ a deft use of words. Not only does Dr Pandya do justice, his translation equals the original in its rhyme and meter.

Humility is the best Virtue:

A resident of Bopal in Ahmedabad, his abode is aptly named “Upanishad” Sitting comfortably in his library, Dr Pandya gets emotional when asked to narrate the 16 years. “Sri Ram is the embodiment of righteousness. Even Lord Krishna alludes to Ram as the complete man. The Ramayana is the first poetic text in the history of epic verses. Only sage Valmiki was allowed to comprehend Brahma and thereon, to pen it. In ways, I am the chosen one to recreate the first epic by the first poet in the world. What else can one ask for?”

Now, the manuscript will be published in entirety by Pasharv Publications. Each chapter will be prefaced by a note by the author. The book is set to released later this year to coincide with Dr Pandya’s 80th birthday.