Letters Of Dignity And Nobility – From Indira Gandhi To JRD Tata 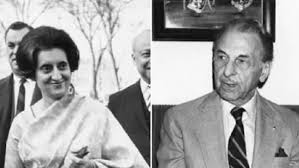 Congress leader Jairam Ramesh shared an interesting story on twitter about a heart-warming episode of handwritten letter exchange filled with dignity and nobility between two of India’s great. It was between Indira Gandhi the deposed Prime Minister and Jehangir Ratanji Dadabhoy Tata.

Having defeated ruling Congress Government in 1977 General Elections, a coalition of small partied had 81 year old Gujarati  Morarji Desai as Prime Minister is conferred with many adjectives by contemporaries and scholars. Most recurring among them is obstinate.

JRD Tata, an avid aviator himself and first licensed pilot in India had started Tata Air lines which was nationalised by Independent India in 1952 amid much chagrin for the founder. However, he was asked to assume the responsibility of the chairman of Air India, as Tata Airlines was to be named thereafter.

It was in February 1978, JRD was sacked summarily from chairmanship of Air India and Indian Airlines without consulting him at all. It remains till date one of the pettiest blow meted out to a person with stature of JRD Tata.

Indira Gandhi Writes while offering “ Jeh” as JRD is addressed in the letter, condolences for the government’s decision “You were not merely Chairman, but the founder and nurturer who felt deep personal concern.It was this and the meticulous care you gave to the smallest detail, including the decor and the saris of the hostesses, which raised Air-India to the international level and indeed to the top of the list.”

“We were proud of you and of the Airline. No one can take this satisfaction from you nor belittle government’s debt to you in this respect,” she adds .

At the same time, interestingly Indira Gandhi acknowledges the “misunderstanding” between the two of them saying that she had to function under great “pressure

JRD Tata responded to the letter nearly two weeks later. Addressing the tallest political leader at the time, 13 year his junior Indira Gandhi as “Dear Indira”, he writes “I was touched by your kind reference to the part I played in building up the airline. I was fortunate in the loyalty and enthusiasm of my colleagues and staff and the support I got from government without either of which I could have achieved little,” he said.