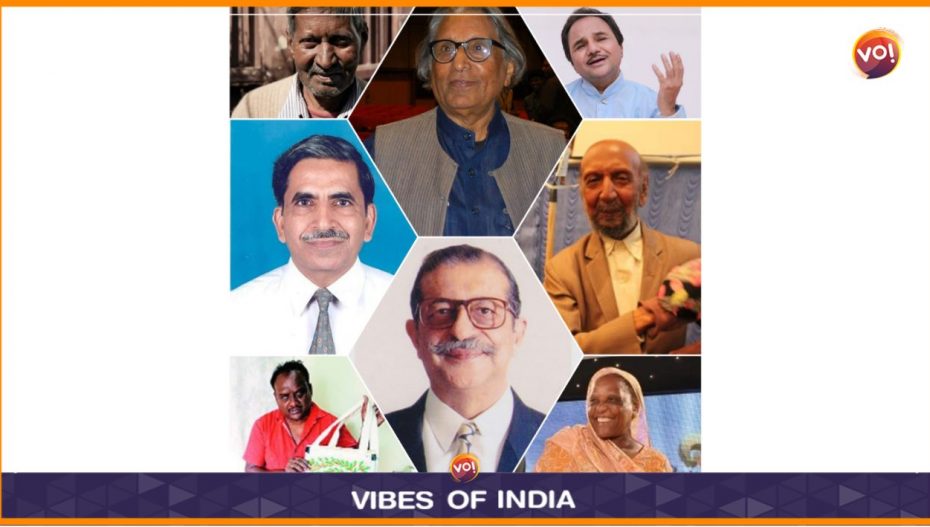 One of the highest civilian honours in the nation, the Padma Award, is handed out in three different categories: Padma Vibhushan, Padma Bhushan, and Padma Shri. The Awards are presented in a variety of sectors, including art, social work, public affairs, science and engineering, business and industry, medicine, literature and education, sports, and civil service.

Eight Gujaratis were among the Padma award recipients for 2023 who were revealed on the eve of Republic Day. The second-highest civilian honour, the Padma Vibhushan, was given to eminent architect B V Doshi (posthumous), who passed away on January 24, while the Padma Shri was given to Areez Khambatta, the creator of Rasna.

Hemant Chauhan, Bhanubhai Chitara, Mahipat Kavi, Hirabai Lobi, Prof Mahendra Pal, and Paresh Rathwa are among the other honorees of Padma Shri. The news that Doshi won delighted the city’s architectural community. The community members claimed that the honour would give many homage activities scheduled for Doshi this fortnight a new perspective. Doshi, a forerunner of brutalist architecture in India, received the Padma Bhushan award in 2020.

The 62-year-old Hirabai Lobi, a social worker and leader from the Siddi Tribe has dedicated her life to the Gujarati Siddi community’s welfare. Through the numerous Balwadis she has established, she is educating youngsters from the Siddi tribe. Through her foundation, Mahila Vikas Mandal, Siddi women are encouraged to become financially independent. “My work speaks for me. Except during the pandemic, which took a toll on my health, I have been on my mission to ensure that the community children go to school and the women learn to remain self-reliant. The award has motivated me to do better,” she said.

Paresh Rathwa, 54, is a Chhota Udepur-based Pithora artist who promotes the legacy of an old culture. A 12,000-year-old tribal folk art known as Pithora was produced as a sacred tribute to Lord Pithora, the god of grains of food. A significant contribution to showcasing this art internationally, including about 30 shows. By offering students both online and offline training, raising awareness of the long-standing custom.

Bhanubhai Chitara, 66, the Chunara community’s seventh generation of Kalamkari artists continuing the history of the 400-year-old traditional art of Mata ni Pachedi (behind Mother Goddess). Each artwork contains a narrative that is based on mythological epics like the Mahabharata and the Ramayana. contributed significantly to the promotion of the art form by organising 200 workshops and exhibitions in India and around the globe.

Gujarati literature and music are related to the Indian writer and singer Hemant Chauhan. On November 7, 1955, he was born in Gujarat’s Rajkot district’s Kundni village. He specialises in traditional music, including Bhajan, religious, and Garba tunes. He was given the “Akademi Ratna Award 2011” on October 9, 2012, in recognition of his services to Gujarati folk music. He’s often referred to as the Bhajan King of Gujarati music and is regarded as one of the top Sugam Sangeet performers.

With his award-winning puppet serials for television and educational films in India and abroad, international Indian puppeteer Mahipat Kavi and his touring theatre group employ puppets to bring important messages on social concerns to life, such as AIDS, family planning, and the environment.

Ex-Professor of Veterinary Public Health (UNDP), Addis Ababa University, Prof Dr Mahendra Pal has written 8 books and 612 articles. Additionally, Professor Pal served as the department’s head and professor at India’s Anand Agricultural University. He is recognised for creating the PHOL stain, Narayan stain, APRM medium, and Pal’s media for the study of fungus, which is connected to both human and animal clinical problems. For the first time, he has determined the prevalence of Cryptococcus neoformans in the environments of Djibouti, Nepal, and New Zealand. The first isolation of Candida albicans from mastitic milk and the discovery of Trichophyton verrucosum in camel dermatitis in Ethiopia have both been reported by Prof Pal.

Below mentioned is the full list of Padma Awardees: