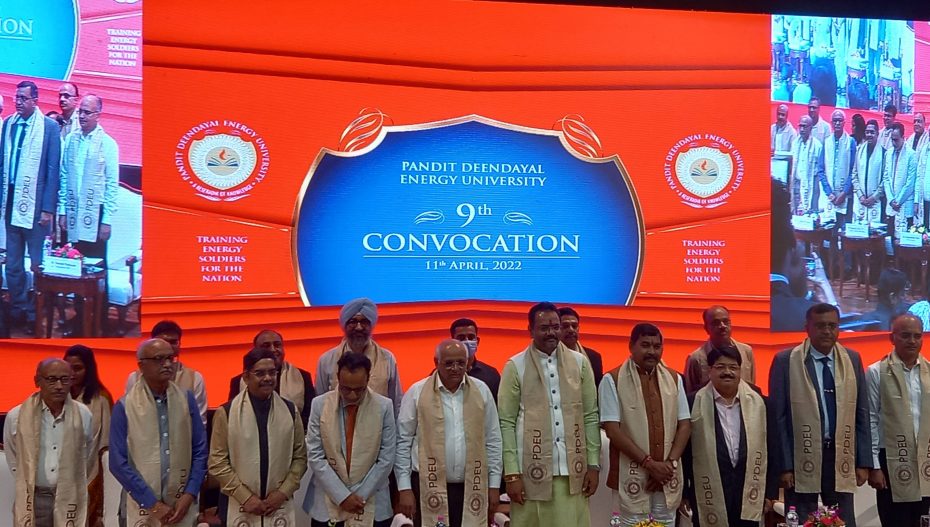 On Monday, Pandit Deendayal Energy University (PDEU) organized its ninth convocation ceremony in which 1563 students got their degree certificates. The function started with an Urja Stuti.

Director-General of PDEU, Dr. S. Sundar Manoharan, showcased the work done by the institution in the past year. The first convocation ceremony of PDEU happened nine years ago and had a batch of only 132 students, he added. The number of students passing out on Monday was 1563, he mentioned with pride.

There was growth, not only in the enrollment number of students but also in the institute’s capacity. The DG of PDEU was grateful to the students for accepting the new ways of education. He appreciated the students by saying that they not only adopted online learning but also excelled in it.

Furthermore, he mentioned that 61 funded projects, 184 patent files, and 20 copyrights were on campus.

Mukesh Ambani, Chairman of Reliance Industries and President of PDEU, focused on the importance of science and technology in the betterment of society. He compared his emotions to a parent whose child took the first steps. He addressed all the students as his family and congratulated them on their graduation.

Ambani promised to support all the students in their future endeavors. He wished them to become more innovative, come to disruptive projects, and make the nation proud.

Union Minister of Petroleum and Natural Gas, Hardeep Puri, congratulated the graduating students and reminded them of the importance of energy in India’s growth. He expressed his emotions about India becoming a $10 trillion economy. “India is exploring the new energy sector,” he added.

Chief Minister of Gujarat, Bhupendra Patel, compared PDEU to the ancient gurukul school. He said that the convocation ceremony replaced the tradition of giving Diksha. “It is a student’s responsibility to innovate and never give up on their dreams,” he concluded.