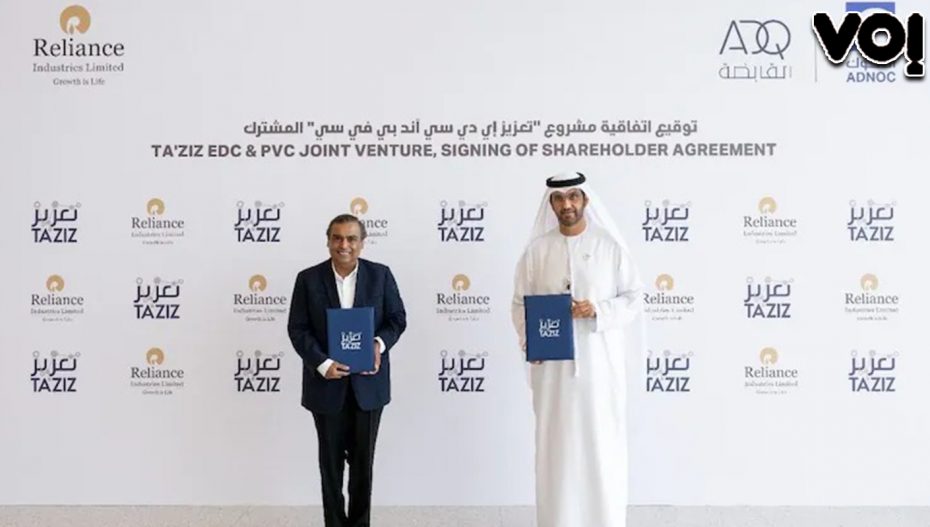 On Tuesday, Reliance Industries announced that it had signed a shareholder agreement with Abu Dhabi Chemicals Derivatives Company RSC Ltd (TA’ZIZ) for a $2 billion investment in the TA’ZIZ EDC & PVC project.

The oil-to-chemicals conglomerate is a strategic partner in TA’ZIZ EDC & PVC, a chemicals development at the TA’ZIZ Industrial Chemicals Zone in Ruwais, with Abu Dhabi National Oil Company (ADNOC) and ADQ, an Abu Dhabi-based investment and holding company.

According to RIL, “the TA’ZIZ EDC & PVC joint venture will build and operate a Chlor-Alkali, Ethylene Dichloride (EDC), and Polyvinyl Chloride (PVC) production facility under this agreement. For the first time, these chemicals will be manufactured in the UAE, opening up new revenue streams and opportunities for local manufacturers to Make it in the Emirates.”

“Reliance is a valued strategic partner, and our collaboration at TA’ZIZ underscores the importance of industrial and energy cooperation as a means of strengthening the UAE’s deep-rooted and friendly ties with India,” Dr. Al Jaber said. “We are expanding on this partnership and the progress made at TA’ZIZ in order to create more opportunities to drive the UAE’s industrial and manufacturing growth, while also advancing cooperation on decarbonization, new energies, and upstream production.”Dr Al Jaber added.

“I am pleased to see the rapid progress made by The TA’ZIZ EDC and PVC joint venture between Reliance Industries Limited and TA’ZIZ in such a short time,” Mukesh Ambani said. This joint venture exemplifies India and the UAE’s strong and growing ties, and it will serve as a model for future projects based on the two countries’ strengths. I am looking forward to the project’s rapid implementation, which will take us a step closer to improving the lives of our people in the region.”He further added.

According to the statement, the TA’ZIZ EDC & PVC project is expected to benefit from the free trade agreement signed between India and the United Arab Emirates in February of this year. Bilaterial trade between the two countries will be boosted as new trade and development opportunities, such as TA’ZIZ, become available, it added.