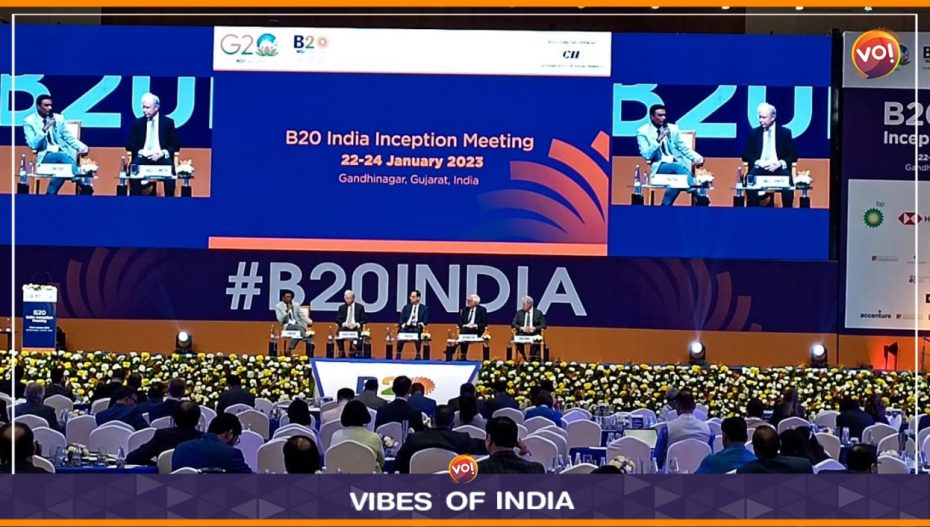 Taking the solar milestone a step further, comes an ordinary housewife from the town, who spoke at “G20’s Connect to Gujarat” session held at Mahatma Mandir on Monday. The event was the inaugural chapter of the “B-20 India Inception Meeting.”

The meet began with a short film documenting an overview of Gujarat. Thereon, the session was steered by an informative section on Gujarat’s economy, manufacturing, solar energy and pharma sectors.

For his part, Cadila Healthcare chairman Pankaj Patel, delivering the inaugural speech noted that such meets equip potential investors with basic knowledge about the state and its economy.

Housewife Chetana Patel delivered a confident speech outlining the journey to becoming wholly solar-reliant. “I would like to thank the government of India in making Modehra a frontrunner where it comes to solar-power as the prime energy source. Today, solar panels have been installed on 1,300 homes and that has done away with electricity bills. A total of 16,000 solar panels have been installed in Modhera. We pray that the Sun God blesses each and every village in India with similar progress.”

Lauding the feat, Hisnori Takasiba of TDSG (TDS Lithium ION Battery Gujarat Pvt Ltd) further informed that Suzuki is all set to manufacture 5 lakh cars per year at its Gujarat plant. Maruti Suzuki plans to create 70,000 jobs by investing Rs 23,000 crores at its EV plant in Sitapur. The auto giant has already signed an MoU with NDDB for bio-gas development.

Noting the shift in focus to renewable and alternate sources of energy, MoS for Industries, Balwantsinh Rajput, added: “Gujarat is now the driving force to making India a trillion-dollar economy in 2032. The Central government has been guiding our thrust for a zero-carbon approach with active backing for hydro-policy.”

Likewise, state finance and energy minister Kanu Bhai Desai, while talking about the need to go solar to counteract global warming, said: “Gujarat is the first state in Asia to have set up a Climate Change Department. Gujarat produces 50% of India’s renewable energy.” He also touched upon the state government’s provision of a “gender budget” to set aside funds for women empowerment.

In his vote of thanks, Kulin Lalbhai of Arvind Mill informed that the B-20 Forum is a working group for the global economy. He hailed the state’s leading-edge stride in taking on newer horizons in business and industry.