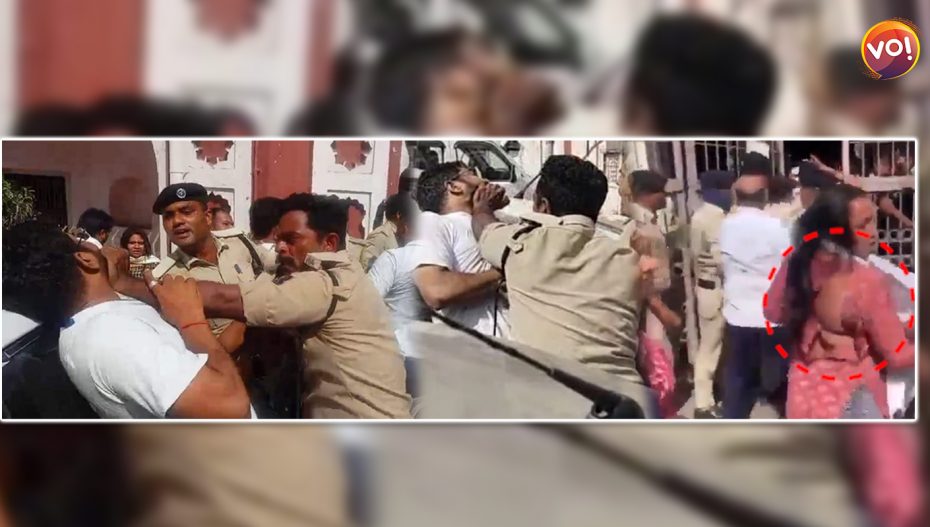 In a brazen use of force, the security personnel of the Surat Municipal Corporation and the police on Sunday thrashed Aam Aadmi Party (AAP) councillors while they dragged them out of the SMC headquarters where they had camped through the night in protest against the abrupt end to the General Board meeting.

In full public view, SMC security staff partially tore off from the back the Punjabi dress of woman councillor Kundan Kothia, who had defected to the BJP but returned to the AAP soon enough. The AAP’s youngest woman councillor, 25-year-old Payal Patel, showed a video of the torn dupatta of Kundan by the security personnel. Kundan had covered the torn part with her dupatta.

Not only this, the security staff held AAP councillor Ghanshyam Makwana (ward number 4) by his throat as well as roughed up Kanu Gedhia from ward three. Senior AAP leader of Surat Dinesh Kachhadia told Vibes of India, “We are going to lodge a criminal complaint against the ill-treatment of our councillors.”

It all began on Saturday evening when Mayor Hemali Boghawala abruptly concluded the General Board meeting (the municipal corporation’s version of a State Assembly) just when the AAP was to move a proposal to the House.

Enraged by this, the opposition AAP members staged a huge protest over this and in an unusual move decided to stay up in the General Board meeting hall. They even organised mattresses and pillows for the councillors to sleep in the SMC building.

When they refused to budge, the SMC authorities snapped the electricity as well as water connections to the building. However, the AAP councillors spent the night inside the premises.

The orders were issued to the security guards to get the councillors removed from the building. By then, scores of workers of the AAP gathered outside the closed iron gates of the SMC building in Muglisara and the police roughed them up outside.

Within the SMC premises, the security staff started physically lifting the councillors and dragged them out. In the melee, councillor Makwana was held by his throat and beaten up severely. Similarly, councillor Gedhia was thrashed by the guards.

In the meanwhile, a security guard pulled the dupatta of the woman councillor Kundan Kothia, who was resisting the security personnel’s attempt to drag her out and pushed her around.

Angry AAP councillors were seen shouting, “Is it a democracy or autocracy? We don’t even have the right to speak here! We were about to table our proposal, during the allotted hour, when suddenly, the announcement was made that the meeting was over.”

Media personnel were barred from entering the SMC campus and they got all the video footage and messages from the corporators who had “locked themselves in.”

When asked, Mayor Hemali Boghawala told Vibes of India, “It is the authority of the Mayor, who chairs the general board meeting, to conclude it anytime. As for the reports of councillors being beaten up, it may have happened after they refused to heed to repeated requests by the security men to move out of the building.”

Asked about their pending proposal, an AAP corporator messaged: “We were to table two proposals. The first was related to the recruitment of Class IV employees. This section has been diligently discharging its duties of ensuring a clean and sanitary Surat. However, no recruitment has happened since 2017. With the inclusion of new areas under the municipal body, it is natural to increase the number of janitors. At present, janitors are being hired on a contract and are paid Rs 140 for four hours. This is grossly unfair but the sweepers are sticking on, hoping that their service will be made permanent.”

BJP, Congress Stand with the Rich; I am with the Poor – Kejriwal in Gujarat

Hardik Pandya's Form In IPL: A Good News For Team ...