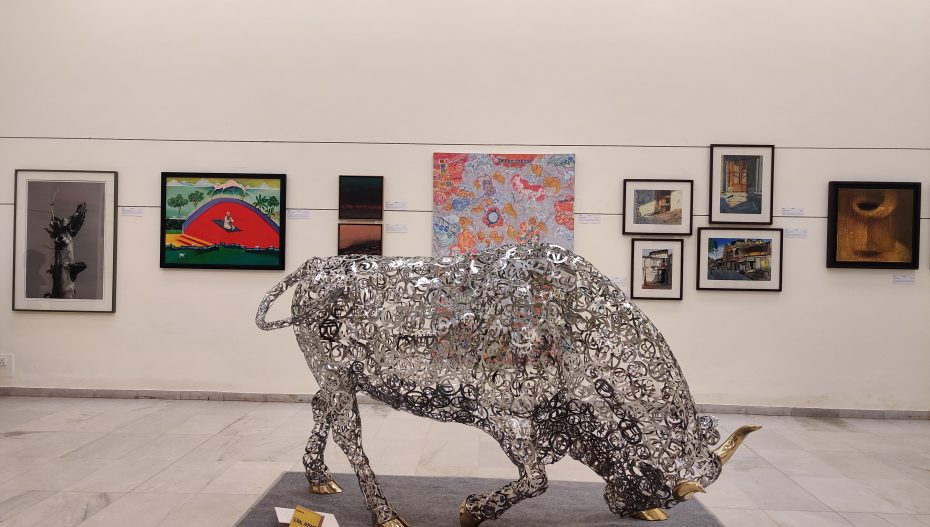 From scented fresh flowers to soothing live music, the Verve art exhibition organised by the Jain international trade organisation at the Hutheesing Visual Art Centre managed to give off a soothing vibe. It was a nice blend of decorative setup and artistic paintings.

The exhibition started from October 11, 4:30 pm and is to continue till October 13, 2021, 4 pm. It was commenced by a ribbon-cutting ceremony, followed by a lamp lighting ceremony and Navkar mantra. Dignitaries present for the event included Mr Umang Hutheesing ( Royal Cultural Revivalist), Ganpatraj Chowdhary, (JITO President), and  Amit Ambala (Artist). The members of the JITO women wing of Gujarat were also present along with other dignitaries.

The exhibition proved to be a great platform for women to showcase their work as there were over 60 paintings and sculptures by about 35 artists – all women.

Amit Ambala thanked the JITO committee for this initiative and quoting musician Ravishankar, he said “We do not need Tansen, we need Kan-sen”. He further added that our country does not lack the number of artists, however, there are only a few who have genuine admiration for art.

JITO APEX Chairman, Mr Ganpatraj Chowdhary applauded the work done by the women team of JITO and their dedication towards putting this show together.”I will like to congratulate the Jito women wing members, especially Sushma Ji (the convener) for putting in rigorous efforts to pull this event off for the last several months.”

JITO was formed in the year 2007 for reflecting the glory of ethical business practices. This event was organized in the light of celebrating Jain artists for the first time under the JITO banner and the fact that Covid proved to be beneficial to the artists who were not able to make a profit off their skills earlier.

The organisation inspires to be a catalyst between art and the artist and 30 % of the money garnered from the sale will be used to set up a pathology lab in Palitana. The team thanked Dr Bhavini Shah, founder of Neuburge Supratech for her guidance and vision.