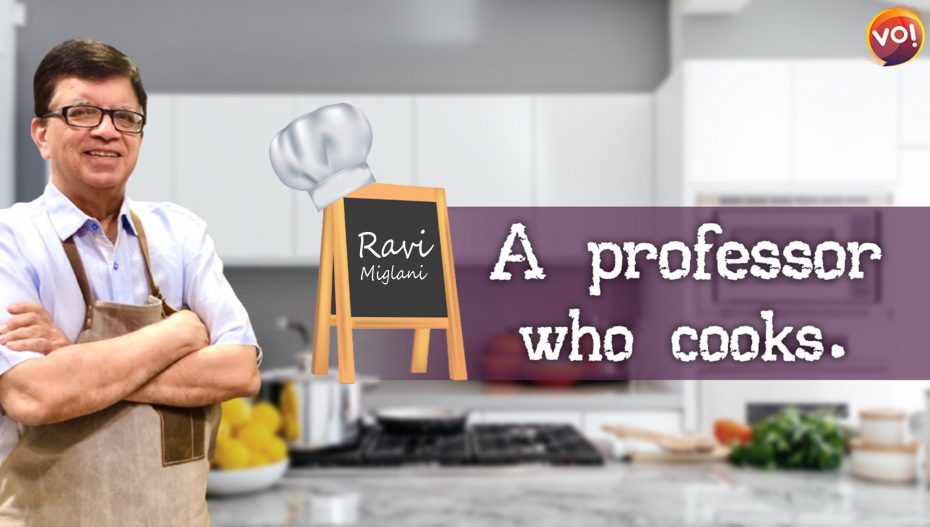 I write here about food. My other interest is education. I am a professor when I am not cooking. Wearing my professor hat, I often ponder over what is wrong with our education system, and how we can reinvent the world of education.

My cooking hat and my professor hat often collide. I then start to think of what cooking has taught me about education:

I cook from the heart, not the head. I get a feel of the cooking with my five senses, and often the sixth sense too. Cooking needs intuition, gut feel, emotions. I do not just follow recipes. I treat recipes as suggestions, not prescriptions. If I just replicate a recipe, I would be doing a faint photocopy of the recipe writer’s masterpiece, not creating my own masterpiece.

Similarly in education, we often put too much emphasis on students memorising facts, learning from textbooks, listening to professors, dutifully taking notes. And spilling it all out in the exam. Following the textbooks and professor’s lecture does not add to the total net knowledge in the world. It is like following the recipe as a prescription rather than a suggestion. We need to allow students to debate, disagree, and come up with original ideas; not just reproduce the ideas from the professor and the textbook.

In our High-Power-Distance culture, children are taught not to disagree with their elders. That creates a top-down one-way education, which is a barrier to creating new knowledge. Our education system needs to allow students to experiment, and debate, and disagree, and create new ideas. Just like experimenting with new spices and new cooking methods, creates exciting new flavours in cooking.

Allow students to create their own masterpieces, not copies of their professors’ masterpieces. A professor should teach the students how to think; not tell them what to think.

The best cuisines are those that have assimilated ingredients and cooking techniques of other cuisines. Indian food is a melting pot of Persian, Arab, Turkish, Portuguese, British, Chinese influences. Such assimilation creates magic; the whole is greater than the sum of its parts.

Similarly, interdisciplinarity is the future of education. As we integrate the concepts and methodologies of various disciplines, we see solutions which a single discipline would never have been able to see. Problems of the world need an interdisciplinary approach. Today’s challenges, like the pandemic or climate change, are not a science problems – these are science, and economics, and politics, biology, and sociology, and behavioural economics problem.

Our education will bring out magic only when many disciplines meld, just like food brings out magic when varied cuisines meld. When spices mix, we create flavours that are beyond what any single spice could have created; when disciplines mix, the resulting interdisciplinary approach extracts hitherto unknown solutions.

People often focus on the Input and the Output of cooking; instead, we need to focus on the Outcome. The input is the ingredients and the recipe steps. The output is the dish that comes out at the end of this process. But, if I just follow the steps, and measure out the ingredients as specified, I get the expected dish as an output, no surprise there, no aha moment, no magic. The magic happens with the delight on the faces of your family and friends when they eat your creation. That is Outcome, which is more than just the Output.

In education, we focus too much on input (lectures, textbooks, attendance) and on the output (exams, marks, degrees). The outcome of education is not a degree. The outcomes are the life lessons, the development of self-reliant young people, learning how to learn. Almost everything we can teach students today will be obsolete in the next couple of decades. People need to learn how to learn, so they can constantly reinvent themselves throughout life. That is the real outcome of education, not degrees.

Lesson 4: Smashing The Bed Of Procrustes

The industrial farming system forces farmers to produce fruits and vegetables that are perfect in shape and size. So that they look good on the supermarket shelf. Wonky, gnarly, ‘ugly’ vegetables are discarded. All carrots looking alike is considered better than each carrot growing into whatever wild shape its heart desires. Let the carrots be ugly and grow wild. That is brings the flavours out. There is already a growing Ugly Food movement, to counter this tyranny of uniformity.

Reminds me of the Greek myth about Procrustes. He used to host travellers to sleep in the infamous bed of Procrustes. If the guest was too short, Procrustes would stretch the guest to fit the bed; if the guest was too tall, he would chop off their legs to make them fit the bed. No wonder, his name became synonymous with forced uniformity. We often use the phrase Procrustean Education to describe the dominant model of education today. Every student is stretched or chopped to fit the exact template, sit in the same classrooms, take the same exams, and get the same degrees.

‘Ugly’, wonky, misshapen students are either beaten into shape or fall off the assembly line. I am a proponent of the Ugly Food movement, fighting for the wonky carrot. I would like to see a post-Procrustean education system where each child is allowed to flourish in their own areas of interest, and not forced to fit into a template. Innovation and creativity happen when one follows their heart, and not when one is churned out like identical bots from an assembly line.

This Professor Cooks. And talks about food ideas, food science, food culture, food hacks, and food history. Watch this space for some food, and a lot more food for thought. Ravi Miglani is a home cook and consumer insights professional. Following a corporate career spanning eight countries and three decades, he is now a professor at Ahmedabad University (when he is not cooking).

Ratatouille – From France To The World Via Hollywo...

My Food Is Better Than Yours

You Are What You Eat