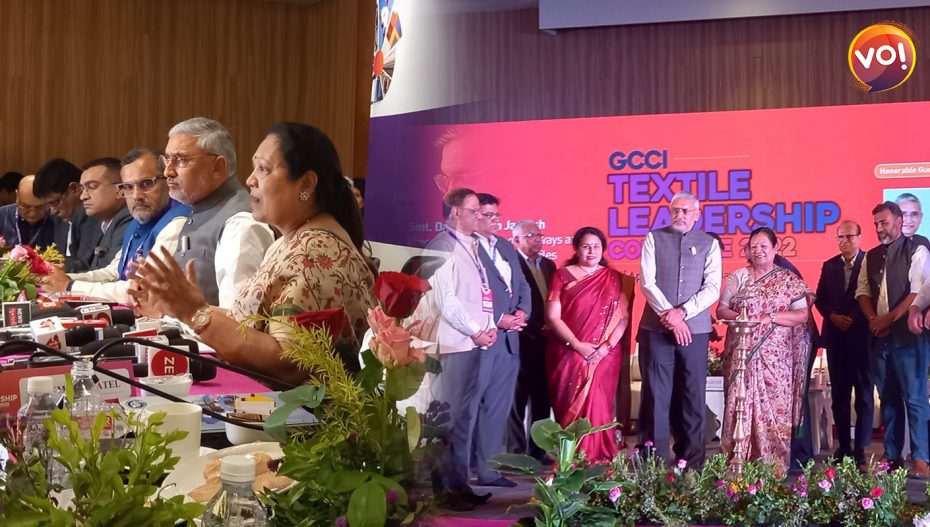 Industry captains helming the Gujarat Chamber of Commerce (GCCI) and ministers got together at the Textile Leadership Conclave 2022 on Saturday. This maiden expo at Ahmedabad registered over 600 participants from all over India, largely professionals working across verticals of the textile industry.

The interactive meet was a samvad between government representatives and industry stalwarts. Union Minister of State for Textiles and Railways, Darshanaben Jardosh, Minister of Industries (Gujarat Jagdish Panchal, Textile Commissioner (GoI) Roop Rashi Mahapatra and Dr Munjal Dave, Industries Officer (Gujarat) interacted with more 27 national and regional associations. The GCCI presented its list of demands and suggestions towards upliftment of the textile industry.

According to Darshnaben, Gujarat’s Navsari is poised to host a textile park across 1000-acres. “The state government has sought assistance with the plan and there is a meet on Monday with the chief minister,” she informed.

Most importantly, the gathering was familiarised with the “Five Fs,” currently underway to boost the sector. “The Central government is working on incentive schemes to strengthen all: Farm, Factory, Fabric, Fashion and Foreign export,” she added. The minister noted that such interactive meets have yielded satisfactory results in other regions too: “Different government schemes are detailed while textile industrialists and SMEs put forward their grievances for bottlenecks to be addressed.”

In his address, GCCI president Hemant Shah stated that “such conclaves are going to become a bigger and routine affair in times to come.” While hailing the “deep knowledge” into the industry that Darshnaben comes with, he urged all stakeholders in the industry to work towards a common goal. Toeing his appreciation for the Union minister, Gujarat minister of industries, Jagdish Panchal, added that the state’s robust growth in the textile sphere owes largely to “a proactive Centre.”

“Industry-related problems have indeed been addressed by the government,” added Roop Rashi Mahapatra.

Among the doyens who shared their views were Donear Group CEO, Rajendra Agrawal shared his philosophy “act as Rama when you start your company and when it grows, turn into Krishna and make people follow your goal.”

Executive Director of Arvind Group, Punit Lalbhai shared a story of reinvention, in which he outlined key moments in the journey of their group from 1897 and how reinvention helped them achieve greater success every time they faced a major challenge. “Ever since its establishment in 1897, change has been the only way to survive and succeed. In mid-80s the group faced a do-or-die situation that is either to die a slow death or to experience a magnificent rebirth and the group chose the latter and invested heavily in denim business when most textile mills went through an end. The risk paid off and today, we are among the top denim manufacturers in the world.”