Kejriwal Asks For One Chance In Gujarat: Attacks Paatil With Questions 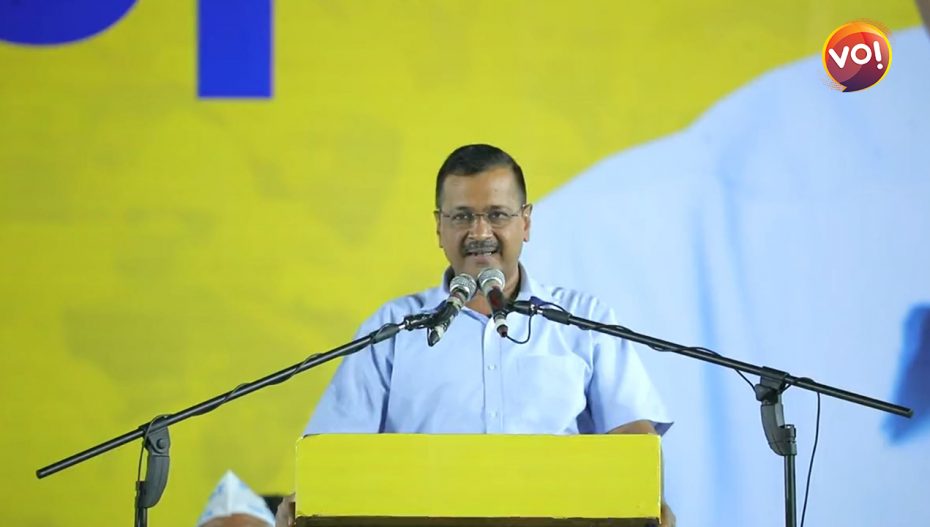 Arvind Kejriwal, the National Convener of the Aam Aadmi Party and Chief Minister of New Delhi, addressed a gathering in the Rajkot district of Gujarat. On Wednesday, it was his second visit to Gujarat in the last ten days amid the election campaigns.

Kejriwal expressed his gratitude to the crowd for supporting the Aam Aadmi Party and gathering in large numbers. He started his speech by mentioning the increasing support the Aam Aadmi Party has received from Gujarat villages in the past two months. During his previous visits, he has been overwhelmed by the rural areas of Gujarat.

The National Convener of AAP said, “The Aam Aadmi Party has created a buzz in all directions of Gujarat. Delhi and Punjab residents have given me a lot of love. I am glad that even Gujarat has started offering me that love. I thank everyone for this love and support.”

In his speech, Kejriwal described his interactions with a Gujarati woman who visited him in Delhi. After elaborating his conversation with the old lady, he added, “Every elderly woman of Gujarat will have the opportunity to visit Ayodhya, Lord Ram’s Bhoomi. I requested the motherly lady to pray to God for the arrival of an honest AAP government in Gujarat.”

Kejriwal, the Chief Minister of Delhi, described the ‘Mukhya Mantri Tirth Yatra Yojana’ that includes a free tour of 12 holy cities. Under this scheme, the government helps the senior citizens of Delhi to go on a pilgrimage free of cost. According to the CM of Delhi, he has sent 50,000 senior citizens on a holy trip in the last five years.

The face of AAP, Arvind Kejriwal, attacked CR Paatil using his wit. During Kejriwal’s speech, he said, “CR Paatil is the Gujarat State President of the Bharatiya Janata Party. But, I have heard people saying no matter who the Chief Minister of Gujarat is, only CR Paatil runs the government. I don’t say it, but people do.”

“We did not allow the private schools of Gujarat to increase their fees unreasonably. The BJP government had 27 years to correct the private education system. But, they chose not to. I want to ask CR Paatil, how many schools has he constructed for the poor and middle class?”

No Health-Care Or Employment In Gujarat Says Kejriwal

Furthermore, he asked the gathering, “Do you need free electricity or not? The BJP government can never give you free electricity as they eat up all the money. Bring AAP to Gujarat, and we will provide you with 24-hour free electricity.” He also criticised the poor healthcare condition and unemployment in Gujarat. He promised to work on it if the people of Gujarat let the AAP government come into power.

“I want to ask CR Paatil a question. How can you run a government when you cannot even conduct a paper?”

Arvind Kejriwal on the paper leaks in Gujarat.

At the end of his speech, Kejriwal conveys a recent incident. He said, “Recently, a Congress MLA showed interest in joining the Aam Aadmi Party. But, the BJP denied him to do so because the Congress Party is their little sister. Our party workers got beaten up by BJP workers of Gujarat. Why do our party members have to face such violence?” He accused BJP of using violence to win elections.

In conclusion, he raised three questions in his speech. Kejriwal said, “Even after 27 years, why is the condition of Gujarat government schools so poor? Why do government exam papers leak so often in Gujarat? Why is the youth of Gujarat still unemployed?” In the end, he asked for one chance from Gujarat for AAP’s government. Many AAP leaders of Gujarat were present with him on the podium.

Adivasi Vote: The Cake That BJP, Congress and AAP Want In Gujarat...