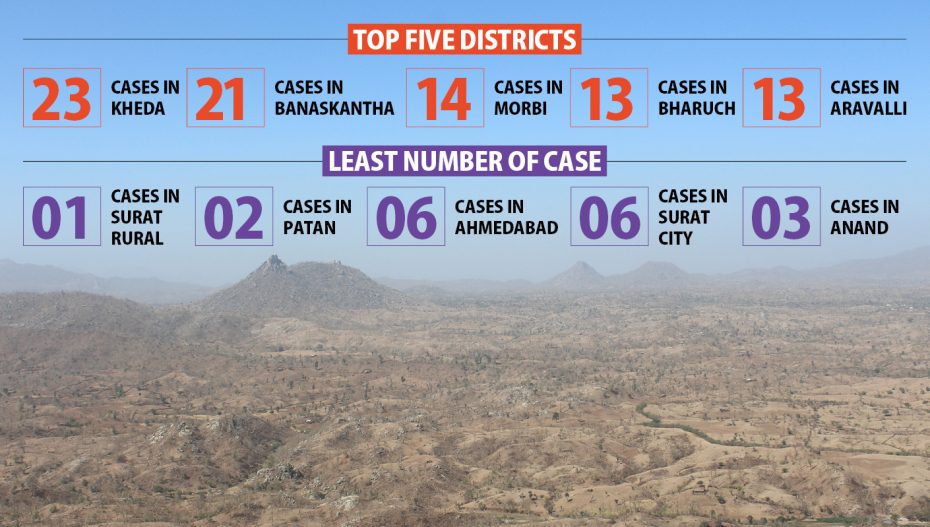 In November 2020, a Jamnagar based lawyer Vasant Manseta and 14 others were booked, under the Gujarat Land Grabbing (Prohibition) Act 2020. He was accused of being part of the gang led by Mafia Jayesh Ranpariya alias Jayesh Patel. Manseta was accused of helping Ranpariya to resolve legal provisions once the land encroached. However, land mafia Jayesh had later fled to the UK where he has been detained and the process of his deportation is in process.

Similarly, Bhavnagar police registered three cases under the Gujarat Land Grabbing (Prohibition) Act. One was against Chatrasinh Parmar who had built a hotel-like structure on 161 sq. meter land in Bhavnagar Market Yard. Hitesh Harsoara was another one who was accused of encroaching 500 sq meters of Government land in Mahuva Taluka of Bhavnagar district. The third was one, Rajesh Khasia had encroached upon 1,416 sq. meters of government land. Chargesheet has been filed in this case by the police in 21 days as per the provisions of the act, which was introduced in the assembly in September 2020 with retrospective effect from August 2020.

According to official sources of Gujarat Police, 215 cases under Gujarat Land Grabbing (Prohibition) Act have been registered in different police stations across the state. “We have over 4,000 applications pending which are being investigated before registering an offence against the accused, under the act,” said a senior police official of Gujarat Police.

According to official figures available with Gujarat Police, there are about 215 cases registered under Gujarat Land Grabbing (Prohibition) Act in which about 842 accused have been booked. “Some are still fugitives and we are hunting for them,” said a police official, who is part of the investigations.

However, very few such offences are apparently registered in urban areas of the state. While 23 such cases have been registered in the Kheda district and 21 in Banaskantha district of north Gujarat, Ahmedabad city has just six cases, Rajkot has four and Bhavnagar has five cases. A senior officer from the police department said, “we have received several complaints of senior Gujarat police officers involving in matters and ensuring that FIRs are not filed and matters are sorted out. However, we would want more people to come ahead and file complaints and seek justice”.

Social activist Bharatsinh Jhala who is working for the landless farmers said though the new Gujarat Land Grabbing (Prohibition) Law is effective and poor persons who have lost their land to the land mafias can be benefitted from this act. But the question remains that why such cases are low in number in urban areas and cities? Also, there are complaints that in some cases, police officers do not encourage complainants to file FIRs and want to become mediators.

Citing an example, Jhala said that about 60 women from the Vautha village of Dholka Taluka of Ahmedabad district have formed a cooperative society and are farming on the land on the river bank. “Though the land does not belong to these women, they certainly earn their living through it. We have requested the authorities to give the land to these women. On June 30th, 2021 officers from local authorities had also visited the spot for a survey,” added Jhala.

For a former session Judge and presently, a practising senior lawyer in The High Court of Gujarat, PM Lakahani has a slightly different take. He said, “Earlier when the act was not there, complaints of land grabbing were registered under sections of Indian Penal Code (IPC). This made the procedure lengthy. Now under the provisions of the Gujarat Land Grabbing Act, 2020, it is mandatory to file the charge sheet, within 21 days of registering an FIR. The complainants are also assured of getting their land back. There is awareness among the people and culprits are being brought to books,” he added.

What is the Gujarat Land Grabbing (Prohibition) Act 2020?

The Gujarat Land Grabbing (Prohibition) Act 2020, enforces strict provisions in cases related to land and property grabbing. If found guilty, the accused could be imprisoned for a minimum jail term of 10-years or 14-years. The act also orders a time-bound resolution to settle such disputes – mainly six months from filing the case. In addition, a fine equivalent to the ready reckoner rate of the land in question will be imposed on the accused.