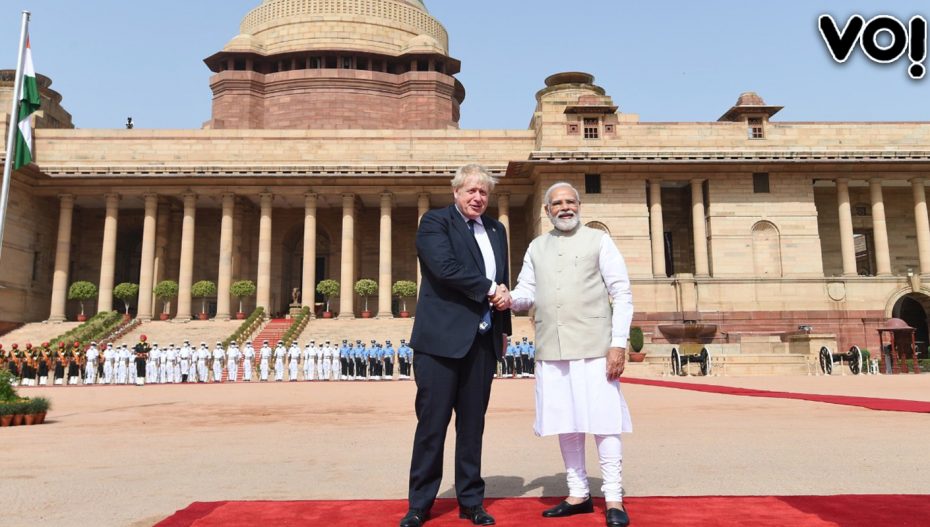 UK PM Johnson said, “We have had wonderful talks today and have strengthened our relationship in every way. The partnership between India and Britain is one of the defining friendships of our times.”

The two countries will be taking steps for sustainable homegrown energy as well. PM Modi said, “We expressed our commitment to fulfilling promises made during the last COP 26. We invite the UK to join India’s National Hydrogen Mission.”

The two leaders also discussed global developments. Both countries have insisted on dialogue and diplomacy in Ukraine for an immediate ceasefire and resolution of the problem.

This morning, PM Modi held extensive talks with PM Johnson, who is in India for a 2-day visit. The two leaders discussed boosting cooperation in fields of defense, trade and clean energy.

The UK PM will discuss defense and security collaboration across land, sea, air, space and cyber domains. The talks will focus to garner support for new Indian-designed and built fighter jets, while the UK will back India’s requirements for new technology to determine and tackle threats in the Indian Ocean. The UK will also offer intellectual and practical know-how and guidance to India in regards to building battle-winning aircraft.

Johnson expressed his pleasure at having the opportunity to create stronger trade relations with India in times when the world is having to deal with autocratic powers. “The world faces growing threats from autocratic states which seek to undermine democracy, choke off free and fair trade and trample on sovereignty. The UK’s partnership with India is a beacon in these stormy seas,” Johnson said.

This morning, PM Modi, through a tweet, welcomed Johnson, calling him a dear friend. This was in response to Johnson’s tweet, where he applauded the welcome he received as he landed in Delhi.