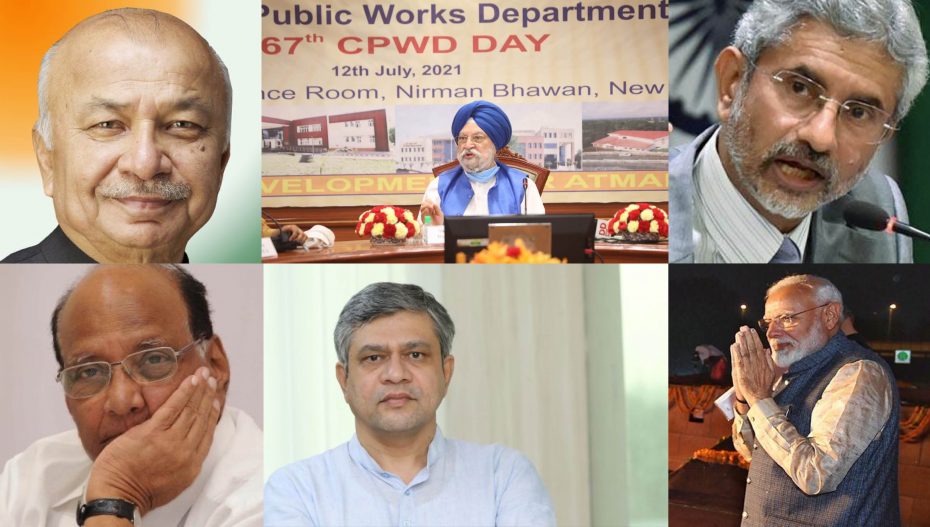 Between them, the former bureaucrats share key portfolios of External Affairs, Petroleum, Housing and Urban Affairs, Power, Railways and Communications and Information Technology.

There has been criticism of the Prime Minister for showing over-dependence on former bureaucrats, but he has his reasons.

Allocating key portfolios of Railways and Communications and IT to Vaishnaw is an important decision by itself. Vaishnaw has also worked with Atal Bihari Vajpayee in the Prime Minister’s Office.

R K Singh, of Bihar cadre, was the collector who arrested L K Advani in 1990 marking the end of Rath Yatra and indirectly giving a new direction to the politics of the BJP and of the country.

Making Puri the new petroleum minister suggests Prime Minister Modi wants to use his diplomatic skills. Puri, a 1974 batch Indian Foreign Service officer, had served as the Permanent Representative of India to the United Nations from 2009 to 2013, and also as chairman of the United Nations Security Council Counter-Terrorism Committee.

And Dr Jaishankar is, in fact, the second career diplomat to become foreign minister in 2019 after Natwar Singh.

The neta-babu nexus is an important facet of Indian polity.

In 1996 India had two Prime Ministers just within two weeks’ time, Atal Bihari Vajpayee and H D Deve Gowda. While the dark reality of coalition shenanigans came into focus, there was another issue in debate — the servility of the senior babus.

Many secretaries and additional secretaries at the Centre were spotted on TV clips and also newspapers standing in the government buildings of various ministries with bouquets. Such acts were uncalled for.

If this was one aspect, there was another highlight of the functioning of the bureaucracy in the mid-nineties. Thanks to the kicking off of the liberalisation policy from July 1, 1991, in the senior echelons there was an intense flight to public sector companies and even to private companies for heavier pay packets.

Now, cut to Maharashtra and circa 2005. At the maiden media conference on appointment as Mumbai police commissioner, P S Pasricha said three people were responsible for giving him the new assignment — the then Chief Minister Sushil Kumar Shinde of the Congress, Deputy CM and Home Minister R R Patil and Sharad Pawar (both of them from the NCP).

Incidentally, Pawar was then the Union agriculture minister and thus should not have had any say in the appointment of a police commissioner. But then that was the ‘Pawar’ of the ‘Maratha strongman’.

Many credit Pawar as a pioneer of the ‘lobby culture’ in Maharashtra’s bureaucracy, and critics accuse him of having a similar stellar role in bringing in nepotism, too.

Such games are common in Pawar’s state. In the mid-nineties, the buzz was that S S Kakodkar was shunted out of the Mantralaya to the Pollution Control Board just to make way for Sharad Usmani — seen by many as ‘Pawar-sahib’s man.’

Besides Kakodkar, the senior most officer of the 1962 cadre, Dinesh Afzalpurkar, was sidelined and N Jayaraman was shifted as Upa Lok Ayukta.

Earlier, around 1993-94, Sharad Pawar also sidelined others including S Ramamurthi and had rewarded N Raghunathan who became chief secretary. Raghunathan was secretary of defence production when Pawar was defence minister.

Another trend that still persists was established in the 1990s, owing to a plethora of factors including compulsions of coalition politics. The prestige of the post of Cabinet Secretary, considered the headmaster of the Indian civil service, got diluted because of the dominant role in the power structure of the Principal Secretary to the Prime Minister.

During the Vajpayee-era, his principal secretary, Brajesh Mishra, was really the power behind the throne. In the Modi-era, similar clout is exercised by Principal Secretary to Prime Minister Narendra Modi P K Mishra. His predecessor, Nripendra Mishra, too enjoyed this power.

Under Dr Manmohan Singh, Sonia Gandhi’s handpicked man and ‘quite junior’ in protocol, Pulok Chatterjee, had emerged as a powerful babu.

Initially, it was rumoured that Pulok even ‘took files’ to Sonia. This was later denied and inside mandarins explained that ‘one need not take files anywhere’ to get a work done or not done.

In Kerala, it is said that the babus have been upright and resisted political pressures. “Show me the political boss, and I will show you the rule” – used to be the guiding theme.

However, the equation has been uneasy mostly between the bureaucracy and Communists-led LDF governments.

IAS officer Ramachandran Nair was taken back to the parent cadre state from the Union finance ministry in the 1990s, but Karunakaran was said to be not fond of him. Hence, Karunakaran had blocked Nair’s elevation as chief secretary.

Once upon a time in Kerala, it was also said that over the years corruption had increased but the babus in general were free of the malaise. However, things have apparently changed. In June this year, Chief Minister Pinarayi Vijayan said ‘a minority in the civil services’ in the state are still engaged in activities that are ‘degrading’ the glory of the civil services.

What is the contemporary relevance of sedition law...

IAS Remya Mohan's work during Covid gets the loude...