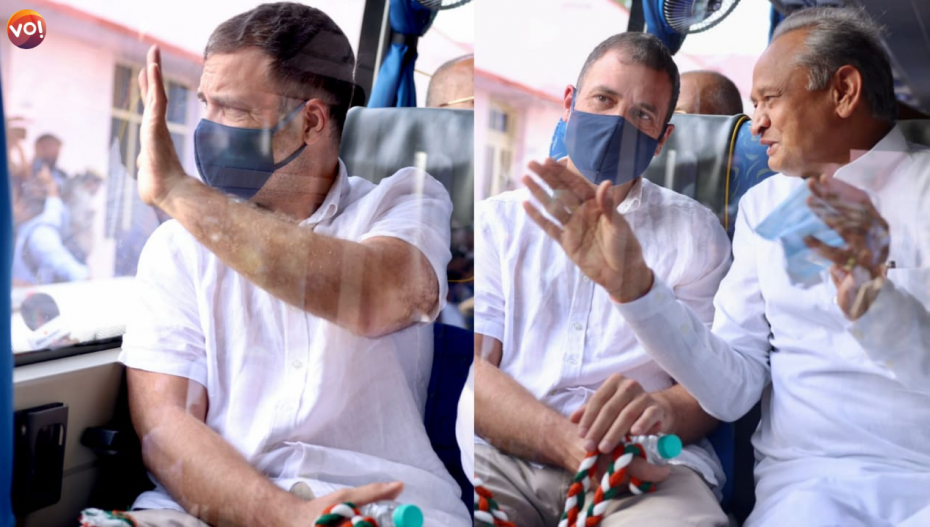 Rahul Gandhi this morning reached Udaipur, Rajasthan, where the Congress party will kick-off their 3-day Nav Sankalp Chintan Shivir today. As was announced earlier, Gandhi took a train from Delhi last night and reached pink-city this morning. He was accompanied by other senior leaders. At the station Rahul Gandhi  interacted with a delegation of the coolie association and listened to their concerns.

The party has planned this brainstorming session to discussstrategies for assembly polls later this year. Besides Gujarat, the party is likely to discuss Chhattisgarh, Himachal Pradesh, Karnataka, Madhya Pradesh and Rajasthan polls as well. The party will also take crucial decisions for 2024 general elections. According to sources, the party will discuss reshuffling of leadership, candidates for constituencies and also internal conflicts and discontenment.

Senior leaders had urged Rahul Gandhi to take over the post of Congress President in March this year and it is believed that Gandhi would consider this request. Following the loss in 2019, Gandhi had stepped down from the post. Also, according to the sources, the party will debate an age ceiling and term limit for Rajya Sabha members. The party has received a proposal to bring in more leaders below the age of 50 and  reserve at least half the seats for them. The request came as the members hoped that the party represents the fabric of India, which is majorly comprised of the youth.

It is believed that the party will keep discussions regarding Centre-State relationship, and communal polarization, the situation in  the northeastern states as well as that in the Jammu and Kashmir, on the agenda. Issues concerning the farmers, the tribal communities, poor educations and other such concerns in different parts of India will also be a part of focus.

The shivir will start with an address from Sonia Gandhi and conclude with Rahul Gandhi’s speech. Around 400 Congress leaders, including MPs and MLAs from all the states and some other important dignitaries are expected at the meeting. The party has booked two luxury hotels for this events.