Security Beefs Up In View Of India’s Republic Day Celebrations 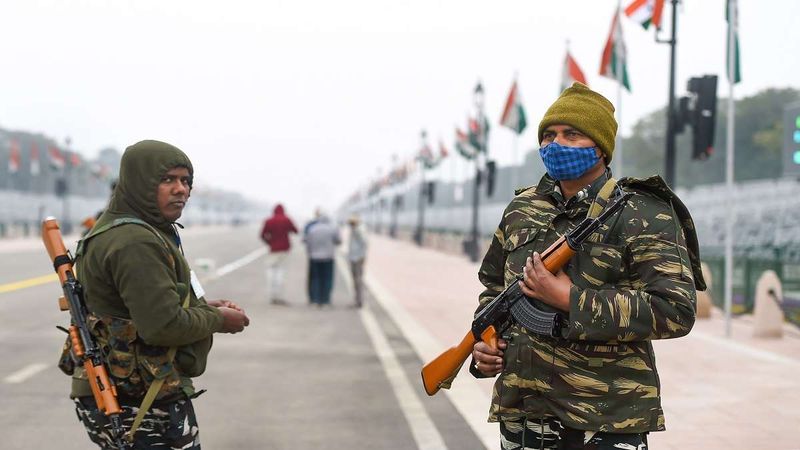 To ensure a safe celebration of India’s 74th Republic Day on Thursday, security has been stepped up throughout the national capital.

This also follows earlier this month’s arrest of two terrorists in Delhi who, according to earlier reports from the police, were in contact with overseas terrorist organisations. Flying of unorthodox and aerial platforms in Delhi’s National Capital Territory has been outlawed indefinitely because of concerns of threats from criminal and terrorist elements against Republic Day celebrations.

In a directive released on Monday, the Delhi Police Commissioner stated that some criminal and anti-social groups hostile to India may endanger the security of the general public, dignitaries, and crucial infrastructure.

Around 65,000 people are expected to attend the march on January 26 and can sign up by scanning a QR code, according to the Delhi Police. Only legitimate pass holders and ticket purchasers will be permitted in. Along with Delhi Police, NSG, and about 6,000 other jawans have been sent out to provide security for the parade on January 26. Around 150 CCTV cameras with high-resolution cameras will be used to monitor activity on Kartavya Path.

From the evening of January 25, the high-rise buildings around the Kartavya Path and parade routes have also been closed. As of Wednesday night, entry for large vehicles is also banned in Delhi. All of Delhi’s borders have been blocked off to heavy vehicles. This time, large vehicles cannot enter the Ring Road in the direction of New Delhi. Passes are required for vehicles to enter these places.

The Central Secretariat and Udyog Bhawan metro stations have been made available for the march, which is expected to draw 30,000 people, according to the Delhi Police.

This time, every metro station is accessible. All main thoroughfares, including Kartavya Path, Janpath, India Gate, and Copernicus Marg, have been closed to vehicular traffic since 4 am. On this year’s Republic Day, Egyptian President Abdel Fattah El-Sisi will serve as the chief guest.