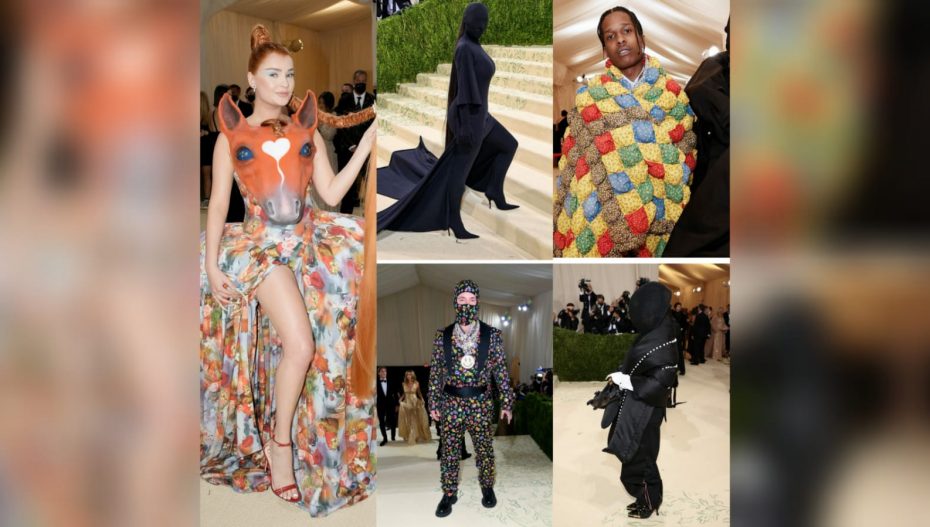 Like all true art, fashion experiments also leave a scope to be considered as absolute disasters at times. The Met Gala 2021 had an ‘American Independence’ theme making a few designers and celebs go all experimental – further leading to some horrendous looks of the evening.

Here’s a list of the top 5 worst outfits at Met Gala 2021 that clearly defied the Gala theme and sparkled a meme-fest for people.

This American model and businesswoman was seen in all-black head to toe and wanted to make a “new subculture” fashion statement but failed to bring out the essence terribly.

This American rapper’s outfit tried hard to pull off the ‘Captain Crunch’ look to the Met Gala which turned out to be bizarre. Many fans and fashion icons took to social media roasting the outfit, comparing it to a game ‘candy crush and made it meme-worthy.

This German singer-songwriter was seen in a horse girl attire which did not go unnoticed by the netizens who made her look go viral on social media.

The American singer-songwriter was carrying a Thom Browne black silk duchess satin down stole sport coat with a suspender skirt. The outfit was covering her head to toe which kind of made way to a mockery.

This global icon’s outfit featured an explosion of flowers in an array of colours. He paired the outfit with silver necklaces and black leather shoes.

These 5 fashion icons steal the limelight at Met G...

Marvel's Wolverine and Spider-Man 2 to exclusively...

Take a look at these age-defying flames of Hollywo...

Acting is serious business for these twenty-year-o...