WHO BURNT KHAMBHAT, Find It Out For Us, Residents Implore. 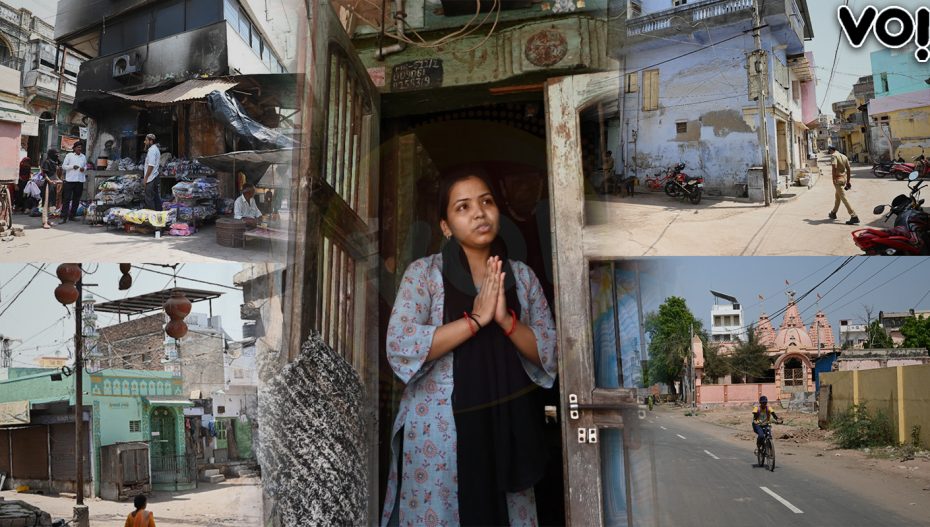 “Please find out who killed Kanaiya Kaka”, Sheikh bhai who has now closed down his small kiosk and has moved out of Khambhat tells us on the phone, crying and  recalling how they regularly met up at the dargah near his house. On the other hand, a Hindu woman Daksha implores Khambhat police to find out the miscreants who set her open-air pop up sort of footpath clothes store on fire. A local BJP leader tries to convince that these local muslims are unemployed and could be after this. She tells them to get out. She and her family have been sharing this workspace with Arifbhai for years now. “I felt so embarrassed when some nonsensical BJP or VHP worker took his name”, she says. We were both together when the violence erupted. Both of us faced losses. He was trying to save our supplies which were being set on fire”, says Daksha. “I ordered a cup of tea and we shared into half like we always do,” she added. “Hindu-Muslim is all about politics. After all, 2022 Gujarat elections’ main theme is going to be Hindutva”, a senior police officer tells Vibes of India (Vo!)

There are scores like Arif and Daksha wanting to know the real perpetrator of violence in Khambhat. But nobody, including the police has any answers .SP Ajit Raijan has arrested 11 people, of course all Muslims, but no body really knows whether they are the real culprits.

At least 25 Muslim families from this little non descript town have left their native homes and shops fearing violence from the majority Hindus. Muslims are less than 13% in Khambhat.

In last five years, there has been no violence in Gujarat during Ramnavmi. But this year is an exceptional one. After all Gujarat faces crucial Assembly polls in December. Gujarat is state which gives and “makes” Hindus feel most secure. Gujarat houses over 88.57% Hindus and since 2002, whether it is Ram Navmi or Rathyatra, Moharram or Eid; it is the 9.6% odd Muslims who “have to “ live in fear and threat.

So it was indeed surprising to witness Hindu-Muslim riots this Ramnavmi. Himmatnagar. Khambhat and Dwarka witnessed communal frenzy. Vibes of India teams visited Himmatnagar and  Khambhat where one man Kanaiyalal Rana was also killed. We saw the violence, the IPC 144 in place prohibiting the congregation of more than four people.

What is interesting about this violence is that both Hindus and Muslims believe that this was an “organised violence” and they had no clue till it actually happened. The Hindus, not surprisingly have gone a notch ahead claiming it was a foreign conspiracy with Pakistan and Afghanistan involved in creating disturbances in the port town of Khambhat.  A lot of social media management was done. Efforts to photoshop and put a saffron flag on Taqia masjid in Himmatnagar was done with a background voice in Gujarati claiming that Hindus have “invaded” and taken over the Masjid. No such thing was done and despite complaints no actions taken against such propaganda. The Gujarat police which does not hasten to take suo moto action when a BJP politician is criticised on social media also maintained their silence.

IN Himmantnagar, despite no permission, hindus took out a Ram navmi rally, a relatively new practise with open swords and baby trishuls. They stopped and sang Ram Bhajans just outside the masjid just before namaz was due. Request from Muslims to sing softly was deliberately misconstrued as slurs and violence erupted.

But it is Khambhat which makes an interesting case study for the Ramnavmi violence. Nearly a week after the violence, people in Khambhat do not know who actually was behind the violence. They, including the police are laughing out at the possibility of this violence conspiracy beinh hatched in Pakistan and Afghanistan.

Our team, Dirghayu Vyas and Hanif Sindhi spoke to at least 40 people across communities. What they found is really interesting.

1. The Muslims and Hindu Chunaras are business partners. They work together in almost all vocations from kite making to akik (agate) stone mining, manufacturing and marketing.

2. The Muslims and Chunaras do not believe in hatred for each other since they are 100 per cent dependent on each other’s business. They share their lunchboxes and tea every day.

3. A local police inspector told our team that the current BJP MLA Mayur Rawal is slightly insecure. Khambhat as such is a Brahmin seat. 86.02% population is Hindus while only 12.65 population is Muslim. The port town which had a glorious history in the past is now embroiled in serious unemployment issues. The youngsters too are fed up with the agate work. According to government statistics, “Based on medical examination of agate workers, that 157 out of 415 persons, who had caught silicosis, died because of the fatal disease, NHRC said in its order to the Gujarat chief secretary, the “menace” had been traced in 1961, and was “confirmed” by the National Institute of Occupational Health (NIOH) in 1980, 2002 and 2010. Now that the Central government has changed, we do not know the latest statistics of the Silicon epidemic in Khambhat.

4. A police inspector has been transferred in Khambhat and the people also are clueless as to why has he only been targeted.

5. Khambhat is a quiet place. In police language, it is not a “plush posting”. But there is hardly any work too. Their district headquarter Anand is nearly 57 kilometres away and so they are hardly summoned there for work.

6. Arif Ghanchi who runs his footwear business on the road shares the shed with two Hindu sisters including Daksha. The day the violence happened that injured several and killed one was also the day Arif and Daksha were sharing their evening tea. Even when team Vo! went, both unanimously said, “We do not know who the perpetrators are. “.

7. Maybe they don’t know but it is important to remember that Ram Navmi processions are taken out every year in Khambhat. Muslims set up shorbet stores outside their masjids for the Hindu devotees but this year the Muslims were categorically conveyed a message that they should not set up any stores or entertain the Hindus. Why? Who conveyed this message?

8. Mayur Rawal, the BJP MLA was not available for any comments but the people of Khambhat do not seem to like him much. “Other than vainly trying to make some money from police or bootleggers’, there is nothing much he has been doing these days. This Ram Navmi procession became a good opportunity for him to consolidate his Hindutva credentials.

9. Kaniayalal Rana was also in the procession and was stoned pelted to death. His house shares a wall with a dargah and has very amicable relations with Muslims around.

10. Khambhat is a quaint little town. The Ram Temple and Masjid are situated on two exactly opposite sides of a long stretch of road which still has remnants of colonial presence.