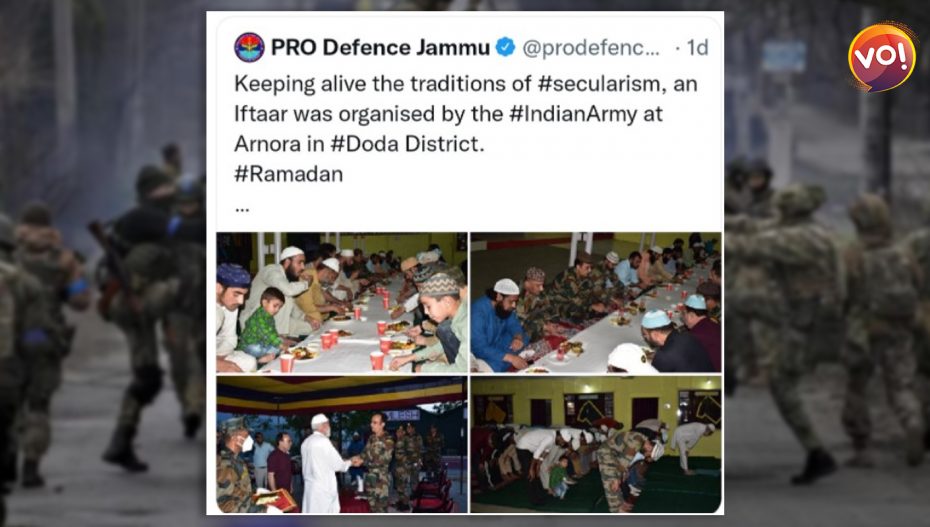 On April 21, the Defence PRO tweeted photographs of an iftar held by the
Army in Doda saying: “Keeping alive the traditions of secularism, an Iftaar
was organised by the Indian Army at Arnora in Doda district”. The
photographs showed the iftar gathering, the General Officer
Commanding of the Delta Force of the Army’s Rashtriya Rifles interacting
with local Muslims and a uniformed person offering namaz with civilians.

While there was no reaction from the Army or the defence PRO to
Chavhanke’s remarks, the PRO defence (Jammu) deleted the original
tweet highlighting the iftar. Lt Col Devender Anand, PRO defence
(Jammu), declined to comment on the deletion of the tweet when
contacted.

Reacting to the development, former General Officer Commanding-in-
Chief of the Western Command, Lt Gen Tej Sapru (retd), who
commanded the Nagrota Corps under which Doda falls, expressed his
dismay at the removal of the tweet. “There was nothing wrong in the
tweet. It should have been vigorously defended. The Army holds iftar in
the insurgency-prone area because reaching out to the local population is
an integral part of fighting the militants. And the Muslims in this part of
the J&K are more Indian than you or me. The Army would do the same
thing for any other religion if there was strife in that area and which it

was tackling. In fact, we do so in the northeast too by reaching out to the
Christian population. This has nothing to do with religion or politics and it
is purely an instrument to fight militancy by taking people along with
you,” he said.

Retired officer Maj Gen Yash Mor too defended the original tweet.
“Indian Army has been at the forefront of interfaith harmony. We as
officer’s take pride in the fact that we have NO religion, we just adopt the
religion of the troops we command,” he tweeted.

Likewise, stated Lt Gen H S Panag (retd), former GOC-in-C, Northern
Command: “The concerned PRO and the Army should have had the guts
to defend the tradition of holding iftar during Ramzan. There is nothing
wrong in it. This is part of the Army’s policy to win the hearts and minds
of the local population. We run Army Goodwill Schools for the local
population too and all these measures are meant to take the local
population along as we fight a foreign-sponsored militancy. And the locals
appreciate these efforts. In any case, there is nothing new in holding an
iftar in J&K and this has been a practice for many years,” he said