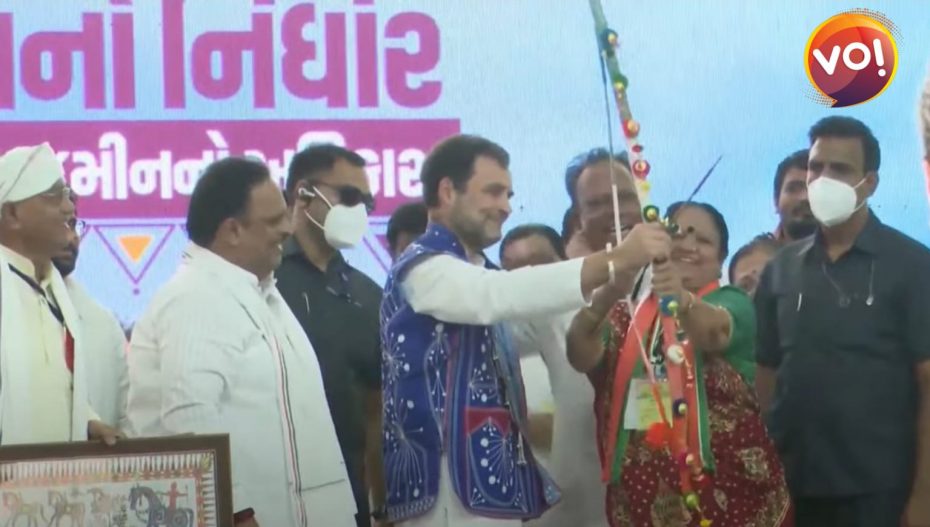 Congress leader Rahul Gandhi is in Dahod, Gujarat, today where he has launched the Adivasi Adhikar Satyagrah campaign. He will address the meeting and is expected to highlight the problems of the tribal community and talk about the measures that should be taken to solve them. He has said that the Bharatiya Janata Party (BJP)-led state government has in its almost 30-years reign in Gujarat has ignored the concerns of the tribal community. The people of the tribal community and other backward classes have been deprived of their constitutional rights, which cannot be accepted in this day and age, Gandhi has said.

Kanti Lal Bhuria MP Jhabua Madhya Pradesh, and Former Union Minister Government of India, said, “Adivasis are being attacked wherever there is a BJP government, be it Gujarat or Madhya Pradesh. Unemployment numbers are increasing and RSS is attacking. Modi is Hitler, only Modi-Shah and the industrialist are running the government, so we will have to fight!”

“Our forests have been sold, our lands have been grabbed. So we are launching this Adivasi Satyagraha. Please adopt our tribal belt, our 27 Assembly seats and 13 other seats where our votes matter,” says Congress CLP leader Sukhram Rathwa.

The Adivasi Satyagraha yatra will cover all the 27 reserved seats for the Scheduled Tribes (ST), apart from the 12-13 more constituencies where tribal voters have influence.

Rahul Gandhi is also likely to meet with working president of the Congress in Gujarat, Hardik Patel, who has repeatedly expressed discontentment towards the state leadership over the past two months or so. Patel, however, has ensured that he has no problems with Sonia Gandhi, Rahul or Priyanka.

As Gujarat prepares for the Assembly elections, it seems that all major parties are trying to gain votes from the regions where tribal community is in majority. Aam Aadmi Party leader Arvind Kejriwal addressed a Adivasi ammellan early this month, and now Congress leader Rahul Gandhi is doing the same.

Although many BJP leaders have already visited the state to hold rallies and speak to the people, Prime Miniter Narendra Modi himself is scheduled to visit Rajkot and Gandhinagar later in the week. PM Modi has already visited the state earlier where he addressed the tribal community in  Dahod, and also inaugurated projects worth more than Rs22,000 crore in Gujarat’s Dahod and Panchmahal.