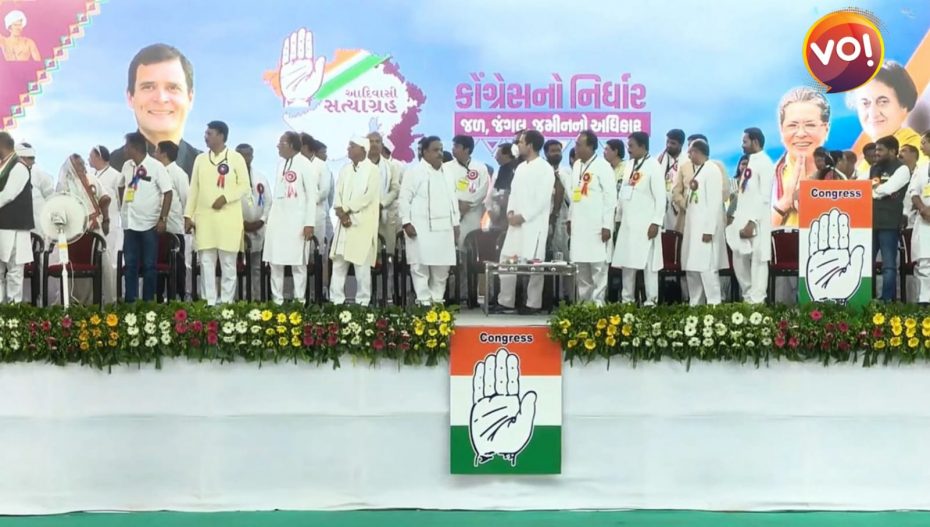 Congress Leader Rahul Gandhi addressed the Adivasi Adhikar Satyagrah in Dahod on Tuesday, insisting that the event was just a meeting but actually a start of an agitation. “This is not a public meeting, it is the beginning of a satyagraha,” he said.

Gandhi slammed the Narendra Modi’s BJP government at the Center regarding demonetisation, GST, Corona and MNREGA. Rahul stressed, “Narendra Modi became the PM of the country in 2014 and before that, he was the CM of Gujarat, PM Modi divided the country into two!”

When BJP came to power, in the Lok Sabha, the PM made fun of MNREGA, Gandhi said, asserting further that he will not cancel it so that the country knows what Congress has done. During COVID, if there was no MGNREGA, everyone would have known the situation in the country, Gandhi highlighted.

He criticized that Gujarat is the only state where we have to take permission to protest. Jignesh Mevani was jailed for 3 months for this. ‘I want to say that even if he gets 10 years in jail, even then he will not be affected”.

Rahul Gandhi said, 3 lakh people died due to corona in Gujarat, “Ganga Maa was filled with dead bodies. 50-60 lakh died of corona in India. Friends in Modi’s media don’t talk about it.”

Rahul Gandhi said that the Congress governments in Rajasthan and Gujarat have fulfilled their promises to the people.

“In Chhattisgarh farmers’ loans were waived and the government is buying paddy for Rs. 2050 per quintal. We did what we were told. We want to meet you and understand what to do for the tribals,” he added.

Rahul Gandhi concluded stating that the land and water of the tribals do not belong to the BJP. But the tribals are not getting their benefit. In the UPA government, we tried that all the common people, dalits and tribals and youth should get all the benefits. Guaranteed 100 days of work from MGNREGA. Millions of people benefited from this.