How Covid Pushed Gujarat’s Sports Coaches Towards An Uncertain Future 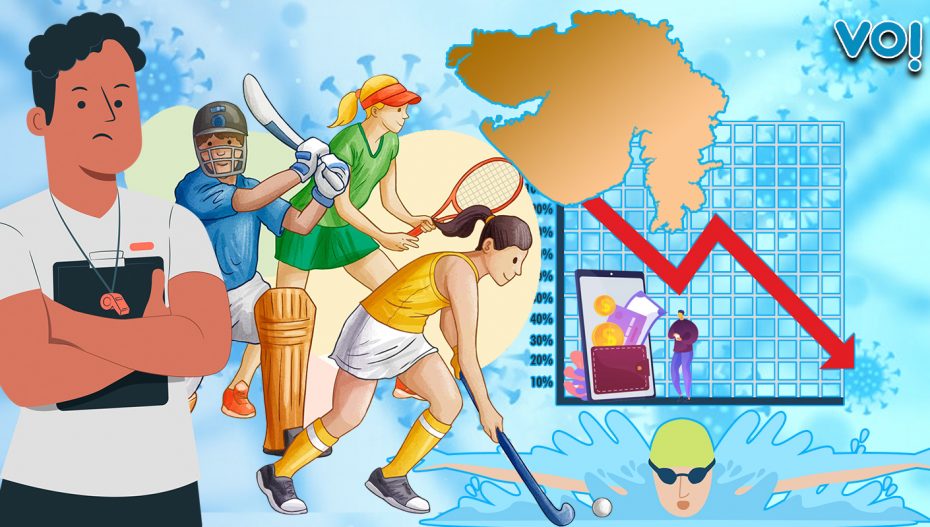 As we enter the third year of the Covid-19 pandemic, there are those who were so severely hit by it that they are still struggling to pick up the pieces. These men and women once dedicated their lives to sports and ensured that they passed on their expertise and know-how to coming generations, but are now fighting for survival. Once looked upon by youngsters as role models, these sports coaches have been forced by the virus to take on odd jobs.

Shital Bhatt, Swimming Coach
Shital Bhatt had been teaching swimming in Gujarat for the past 26 years. His yearly income was over Rs 6 lakh, but come March 2020, his fate changed. “The government shut down swimming pools and that meant no work for coaches like us. My income dropped down to zero. In the past two years, I have hardly earned anything.”

“Mane bas swimming aavde chhe (I only know swimming). I can’t start teaching yoga just because it’s the ‘in thing’. That’s our misery,” he adds.

To run the house and feed his family – a wife and kids – was a tough task and it still is. “My wife started teaching and that’s how we are striving to make two ends meet.”

Currently, Bhatt has resumed teaching swimming but running the house and paying for children’s school fees is still a big ask for the family as the demand is not that good given the fear of contagion. Due to increasing cases of Covid-19, the government has not just shut down private clubs but also sports coaching centres and schools – the primary place for sports coaches to survive.

“My salary was Rs 22,000 per month. Like any middle-class family, even we dreamt of having a house of our own. I got one at Gota and I had to pay an EMI of Rs 13,700. When I lost my job, I was shattered as my father doesn’t earn and my mother is a homemaker. I never felt so helpless in my life,” she says tears brimming in her eyes.

“Not even in my nightmare had I thought of switching careers but I had to. I started a tiffin service during Covid.”

Her brother Pravin, who is also a skating coach, had also lost his job at Global Indian International School In Ahmedabad (GIIS).

“We both would go to the vegetable market in the old city at 4 am; he opened a vegetable laari in Gota and I began the tiffin service. But even then running the house was difficult,” she adds.

Currently, the Thakkar siblings are still looking for stable incomes in their fields of expertise. For now, they tutor some kids in the morning and run the tiffin service during the day.

Anthony Gomes, 63, is a Table Tennis coach with over three decades of experience. He has been training students in St. Xavier’s College, Loyola School and other private clubs. These days, however, you will find him brokering rented flats amidst coaching sessions.

“More than 60% of the sports coaches in Gujarat either faced a pay cut or lost their jobs completely. Private schools and clubs pay you according to the number of students. Due to government regulations and stigma amongst parents we hardly had any students.”

“All these lead to switching jobs. These days most of my time is consumed by dealing in real estate. It helps me run my house when my salary is reduced to half.” adds Gomes.
***

Kamlesh Nanavati has been a swimming coach for 30 years, but he considers this time as the “toughest”. “Private centres like Rajpath Club laid off all four swimming coaches. Eklavya sports centre in Thaltej posted salary cuts for all its sports coaches. For over a year, we had no income. Not every household has a swimming pool and therefore it was tough for us even to look for private coaching.”

“I continued teaching swimming wherever I got a chance, as that’s all I know,” he concluded.

The Covid No Ball

Former Captain of Saurashtra cricket team Bimal Jadeja, who is also a committee member at  Gujarat Cricket Association, says, “In government institutes and coaching centres, there have been no wage cuts but if we look at the overall picture the situation is a matter of concern.”

“There are over 100 standard cricket coaches in Ahmedabad alone and over 60% of them had to take pay cuts. When there are hungry people at home, you don’t think twice before picking up an odd job. Something similar happened to several coaches. ” adds Jadeja.