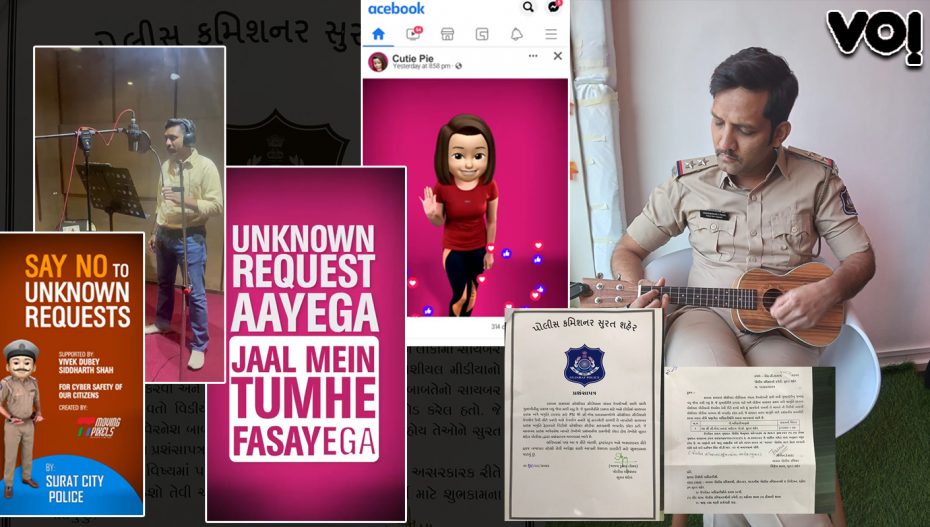 Honey Trap incidents have become one of the biggest challenges in India, where the victims hesitate to register complaints and not only end up losing massive amounts of money but also their credibility in the society. In a revolutionary move, Cyber Cell and Crime Branch of Surat Police has released a catchy song that warns the general public of these perpetrators who carefully select their targets and entice victims with their charms. The song released on all social media platforms generates awareness and asks people to avoid entertaining requests from unknown phone-numbers and accounts.

It is very easy and tempting to chat and talk with someone who is charming and attractive. Just in a few days two people meet and become physically intimate. Alas, the person who contacted you has secretly taken a video or a photo of the private moments and threatens to release them to the public, unless they get a certain amount in ransom. The victim, fearing social defamation, gives in to the threats. However, the demands don’t stop there but instead only keep on increasing. Although many a times, the victims reach out to the police but tons of others don’t.

This is the reason that Surat police has resorted to music to generate awareness regarding this crime and urge people to report such cases. Local actors, politicians and businessmen are usually easy targets for honey traps. The victims are usually rich and influential in the society ande has a reputation to uphold.

A BJP councilor from Bardoli has been suspended from the party in connection to honey trap affair. There is also similar case of honey trap that is allegedly connected to the murder of Jayanti Bhanushali, former MLA of Abdasa of BJP.

In 2017, a video of Congress candidate from Surat (north) assembly constituency Dinesh Kachhadiya Kachhadia became public just a few days before the polls. He had to pay for his actions by losing the elections.  Later on when the crime branch disclosed the matter, a gang accepted that many more people have been victimized but no one had came forward to complain.

In a case of honey trap, Ahmedabad Police too had arrested five people, including its own PI GH Pathan and female constable Sharda Khant. Three women were involved, who befriended an industrialist with the help of social media and later sexually assaulted him. A case was registered under exploitation and POSCO.

These are just a few cases in Gujarat. But honey trap cases have been increasing all over India and involve common people, industrialists, businessmen, politicians as well as actors and local celebrities.

Thus, the song from Surat police, which is now trending on social media, is a noteworthy move.  Panara Chandrashekhar, a 2010 batch police sub-inspector posted at Khatodara police station, has written and sung the song himself. Panara specializes in playing the guitar and mouth-organ. Surat

Surat Police Commissioner Ajay Tomar has wrote Panara a letter of appreciation and also  rewarded him with a cash prize. Tomar told Vibes of India, “We keep doing such innovative experiments, there are capable people in Gujarat Police.  The solution to honey trap is public awareness, because the police comes in only after a trap is found.”

Panara also talked to our team, saying that he was fond of music since childhood, and he always found time for it despite the busy police job. Even during the Corona pandemic, he sang “Ghar mein hi rehna hai”, which had had gone viral.

He ssaid, “Being posted in Cybercrime, I saw how people fell prey to honey trap and how a small mistake can cause so much trouble. That’s why I recorded this song to promote awareness.” He also happily shares how his seniors supported and appreciated him, rewarding him for this move.

He also warns the public that it is better not to accept unknown requests, because many a times the accused with fake ID are also from outside the country and it is difficult to reach them.

Driver Died On The Spot After Eeco Car Catches Fir...