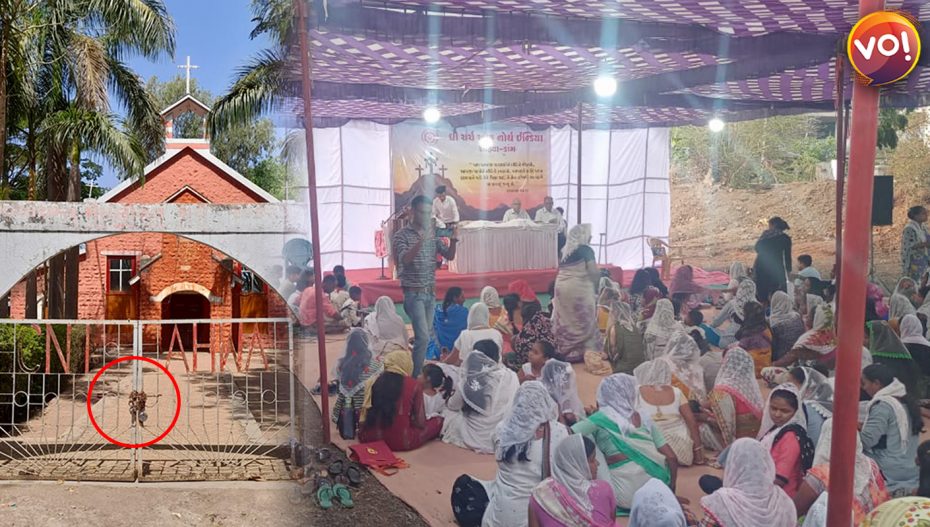 A decade-long dispute between the CNI (Church of North India) and Church of Brethren over the control of a British era colonial church in the tribal district of Dangs in South Gujarat has assumed political overtones. The CNI is dominated by  Congress members, while the Church of Brethren has more members from the BJP.

As of now, a huge lock hangs on the church, which is a popular go-to religious place for Christian tribals in 12-tribal dominated Assembly seats across four districts of South Gujarat, including Dangs, Valsad, Navsari and Tapi. The church was built in 1932.

The dispute over the control of the church exists for almost a decade and has led to sporadic violent outbursts too, as it last happened in 2014 when 24 people were arrested.

The dispute is rooted in the largely Catholic CNI and the Anabaptist beliefs of Brethren, which do not accord any administrative powers to the state of the church. The Ahwa Church’s origins are British, but over time and with intermingling, it adopted Brethren Church practices.

While the church’s closure has undoubtedly aggrieved followers who will now have to forego their Sunday mass and other congregational services, its political ramification is severe.

According to the 2011 census, the official figures for Dangs district showed 89.16 per cent Hindus and 8.77 per cent Christians. However, these are paper figures.  According to KN Chaudhary, a social scientist based in south Gujarat, this church has been the centre for missionaries since Independence, not only in south Gujarat but also in the tribal belt in adjoining Maharashtra.

The tribal communities are among the largest born-again. Surnames such as Gamit, Vasava, Chaudhary and Patel can make it difficult to identify the religious affiliation. The church also runs various educational institutions and chapels in South Gujarat, including in Surat.

Elaborating on the current impasse, church secretary Sharon Mahale, told Vibes of India, “We applied at the district magistrate’s office on March   10 and sought permission to observe Lent, followed by the Holy Week, Good Friday and Easter Sunday. A meeting was convened between the two sides but no representative from Brethren was present.”

“Nonetheless, the administration permitted us to use the Church. However, since May 2, the matter has taken a serious turn and no one is being allowed inside. We wrote to Chief Minister Bhupendra Patel and he instructed the DM (district magistrate) to open the church for prayers. This time, however, the contenders did not let us in.”

For his part, Ranjit Mohanty, chief secretary of the Church of Brethren, told Vibes of India that in 2013, the Supreme Court ruled out the CNI’s successor claims. “The church is for prayers and anyone can come and pray. However, the CNI wants to control the management. The case is pending in the High Court. We were not notified of the closure and will be meeting the district officer.”

Countering Mohanty’s stand, the head of the CNI Church, Ahwa, Ravi Bitti, stated: “In 2013, following the SC ruling, the Brethren sect forced their charter on proceedings of the church. We have time and again suggested different timings for respective services. Local MLA Vijay Patel has tried to help but matters remain in limbo.”

Explaining the discord, local social activist Snehal Marathe added: “Most of the tribals have converted and till 2013 matters were running smoothly.  We have to understand that till Congress was in power, the CNI had the upper hand, largely because most CNI members were Congress supporters. Then came the BJP and Sangh. On the one hand, they oppose missionaries, while on the other, many Brethren names are people’s representatives for the saffron brigade. This fight is taking place at a political level. Sadly, the religious place is locked.  It is more important than who the management is with.”

When asked, local tribal BJP leader Vijay Gamit, thanked the chief minister for his intervention, which made it possible for Christians in the area to observe Lent and Easter with full service. However, he avoided any deeper questions on conversions in the area, stating that, the ” BJP runs on the principle of sabka saath, sabka vikas.”

For Ram Dhaduk, AAP’s south Gujarat in charge, Congress and BJP are two sides of the same coin. “Only AAP and BTP reach where even water, doctors and electricity do not in these areas. Schools are in a pitiable condition,” he rues. Senior Congress leader and former Union minister Tushar Chaudhary argues that “If it is in the administration’s power to allow one month, why not forever? There is a political hand, not from the outside, but the inside.”