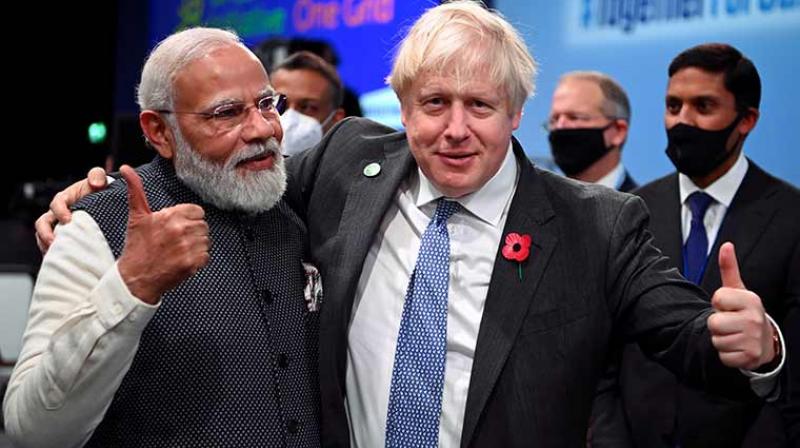 As the circumstances may allow, the British Prime Minister Boris Johnson is likely to plan a visit to India towards the end of April 2022, informed the foreign secretary of India, Harshvardhan Shringlaon Tuesday. After a number of cancelled trips to India, the UK Prime Minister Johnson has accepted the invitation to visit India from Indian Prime Minister Narendra Modi.

Expected to visit India for the Republic Day parade in January this year as a chief guest, PM Boris Johnson had to cancel his visit due to the Covid-19 situation. Now his visit to India will be to focus on elevation and strengthening bilateral ties in the purview of ongoing India-UK Free Trade Agreement (FTA) negotiations, according to the reports.

Other than PM Johnson’s cancelled visit to India on Republic Day, Prime Minister Narendra Modi also had to cancel his visit to the UK for the G7 summit in May last year again due to the raging Covid-19 situation. However, both the leaders met at the United Nations Climate Change Conference in Glasgow in November last year.

Notably, the British Foreign Secretary, Liz Truss came on a visit to India and held talks with the Indian Minister of External Affairs, S Jaishankar. During her visit, Liz Truss said that she was confident that the free trade deal between both the countries could be finalized pretty rapidly, adding that a strong India and a strong UK would do good to the world and will not be limited just to them.

During the bilateral talk with Liz Truss, Foreign Minister S Jaishankar reiterated to work on the progress and implementation of the “Roadmap 2030” – adopted in during a virtual bilateral summit in May 2021 to strengthen the bilateral ties and “Comprehensive Strategic Partnership”.