How Gujarat Became the Top State to Attract FDI & Foreign Dignitaries Since 2014? 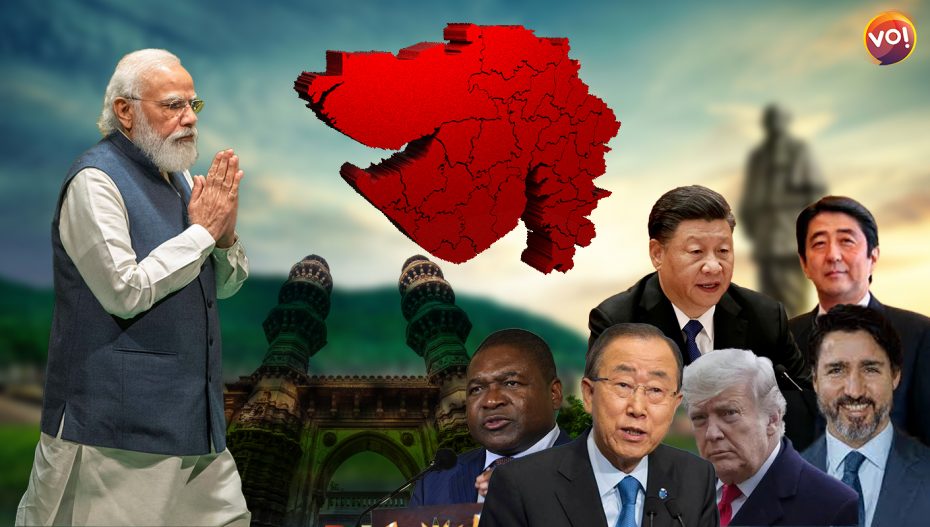 Gandhian philosophies and ideologies have been the traditional foundation of India, and as we dig through the history we see their strong influence on the governance of the country. Nevertheless, in today’s global market, for any country it is essential to build strategies that promote continuously growth of its economy.  Just look at Sri Lanka. Once a booming economy, now it is in shambles and requires rescue fund from the IMF.

One of the key boost for economic growth of the country is Foreign Direct Investment. And you will find few who are as knowledgeable about this area of business as Prime Minister Narendra Modi. Through out his years as Gujarat’s chief minister, Modi had promoted the state as the one with investor friendly-policies and held events to attract foreign investment. His initiative of Vibrant Gujarat Summits provided a great impetus to attract investors from all over the world. Even after he took office in Delhi, Gujarat has been his state of choice to host foreign dignitaries.

In fact, ever since Modi was sworn in as the prime minister, Gujarat has seen marked increase in the influx of FDI. In 2016-17, FDI surged by more than 50% to an all-time high of $3.36 billion. It is a state that has driven the country’s overall FDI, even through the Covid-19 pandemic.  The UN Conference on Trade and Development data noted, even as  global FDI flows dropped by 42% in 2020, India recorded it highest ever FDI inflow of $64 billion. In 2020 to 2021 financial year, the Gujarat received a grand total of $30 billion in FDI, accounting for an impressive 37% share of all FDI to India.

So, why is Gujarat such a favorite among foreign investors? Some geographical elements like the state’s vast coastline are factors, of course. But mostly it is the investor-friendly political atmosphere that has been maintained since Modi’s era. It is also the commitment from the government to encourage foreign businesses to invest in the state. The state’s land prices are some of the lowest and with booming business environment, amazing infrastructure and advanced technologies, as well as policies that are rather flexible when need be are some of the key factors. When Vibrant Gujarat Summits had to be canceled due to Covid-19, the state government took it upon itself to write personalized letters to investors in over 50 countries and invite them to invest there.

However, business factors are one thing. If the country does not maintain healthy strategic relations with different nations, no amount of investor friendly policies will be useful. There has also been a noticeable change in this regard ever since Modi took over as the Prime Minister in 2014.

Earlier, foreign dignitaries, mostly the members of the royal families and other stately leaders, would visit India and specifically Gujarat, to rather build friendly ties and pay tribute to Mahatma Gandhi at the Sabarmati Ashram. Queen Elizabeth visited in 1961, Nelson Mandela in 1995 and Duke of Edinburgh in 1997. However, under Modi’s leadership, the visits from foreign dignitaries began focusing on business side of things. Talks began to revolve around strategic partnerships and investment in the state. This was only strengthened, when he became the prime minister.

Gujarat’s success in attracting increased amount of FDI each year can also be attributed to the fact that it is the preferred state for PM Modi host foreign dignitaries.

Ongoing visit by UK PM Boris Johnson is a proof of how important the state has become when it comes to international strategic and trade relation. Johnson’ agenda for the visit is to increase investment in mutually beneficial sectors and job creation.

It is a known fact that the UK PM has had a good trade relations with industrialist Gautam Adani, who hails from Gujarat. The two met at the Global Investment Summit in London last year, where the Indian group committed $70 billion to energy transition via solar and others.

And who can forget US President Donald Trump’s visit to Gujarat in 2020. He landed in Ahmedabad, accompanied by First Lady Melania Trump and a twelve-member delegation comprising US National Security Advisor Robert O`Brien, Secretary of Commerce Wilbur Ross and Secretary of Energy Dan Brouillette among others. Here he visited the Sabarmati Ashram as part of the historic program in Ahmedabad. During Trump’s visit, the two countries made some noteworthy deals in the defense sector.

In 2018, Israeli Prime Minister Benjamin Netanyahu visited India, again being hosted in Ahmedabad. During his visit he interacted with many people and had a productive meeting with PM Modi. The main focus was on agriculture, irrigation, innovation and enterprise, sectors where India-Israel cooperation could lead to wonderful results.

Japan PM Shinzo Abe’s visit in September 2017 was considered a significant move for both countries. Abe, accompanied by Japan’s first lady Akie Abe, visited the iconic Narmada Riverfront in Ahmedabad and also the 16th century mosque in the old city, Sidi Saiyyed Ki Jaali. The two parties said that they they held many discussions, focusing of strategic partnerships and collaborations in defense as well as security sectors.

In 2017, Canadian Prime Minister Justin Trudeau, visited Ahmedabad with his entire family. He too toured Ahmedabad, paying tribute at the Sabarmati Ashram and also at Akshardham temple at Gandhinagar.

Mozambique President Filipe Nyusi’s visit to the state in July 2016 focused on cooperation in the fields of agriculture and technologies. He visited the Anand Agricultural University and gathered information about new technologies being developed by the varsity in the field of agriculture. Along with his delegation, he also paid visit to Educational Museum and plant tissue culture laboratory in the university premises.

One of the major tours by a foreign ministers was Chinese President Xi Jinping’s 2014 visit to Gujarat just six-months after Modi was sworn-in as the Prime Minister. The pictures of the two leaders enjoying and swing and festivities at the Riverfront are unforgettable.

In 2015, Ban Ki-moon, who served as the eighth Secretary-General of the United Nations from January 2007 to December 2016, visited the state to attend Vibrant Gujarat Summit. John Kerry, who served as United States secretary of state from 2013 to 2017 under Barack Obama, attended the global investors meet in 2018.

David Malpass, President of the World Bank Group since 2019, visited the Statue of Unity in Narmada district and spoke on the importance of maintaining a strong Indian Civil Service.